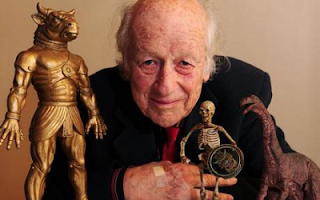 Stop-motion animation wizard Ray Harryhausen has died at his home in London, England. If you don't know who Ray Harryhausen is, you shouldn't be reading this blog. The best way I can explain the man's incredible cinematic legacy is by naming some movie titles....titles such as JASON AND THE ARGONAUTS, THE 7TH VOYAGE OF SINBAD, EARTH VS. THE FLYING SAUCERS, MYSTERIOUS ISLAND, and THE BEAST FROM 20,000 FATHOMS. All of these films, and many more, were enlivened by Ray's magnificent creations.

The best way I can pay tribute to Ray is by saying that when I was a little kid, and I first watched the movies he worked on when they were being shown on TV, I thought they were REAL. I believed in all the things he created. The giant bee/giant honeycomb sequence in MYSTERIOUS ISLAND absolutely sacred the crap out of me back in the day. That was the creative power of Ray Harryhausen.

Hundreds and hundreds of movie directors, writers, performers, and special effects technicians have been influenced by Ray Harryhausen. (And about a hundred more have ripped off his stuff.)

Ray Harryhausen was one of the most important figures in the history of fantastic cinema. If movies are supposed to give you "a sense of wonder", no one was better at it than him.