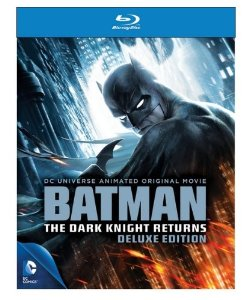 If you been reading this blog, you'll know how much I enjoy the animated adaptations of the DC Comics Universe. I still say that the people responsible for these various features and television programs should be the ones responsible for the live-action DC Superhero movies. That idea will more than likely never happen--but at least the animated features keep on coming.

One of the most ambitious DC Comics animated adaptations of them all was the recent version of Frank Miller's seminal Batman: The Dark Knight Returns. That 1986 graphic novel is one of the most acclaimed and controversial comic books of all time. Trying to adapt it in any format is just asking for trouble. It wouldn't be impossible to do it in live-action....Miller's work has been the basis for films like 300 and SIN CITY. An animated THE DARK KNIGHT RETURNS would seem to be the way to go. This version is a worthy attempt, but I think in the end it comes up a bit short.

This story was originally released to home video in two parts. The Deluxe Edition combines the two, unabridged, into a 148-minute feature. That's a mammoth running time for an animated movie, and it shows that the crew behind it tried to incorporate as much of Miller's story as possible. Just about everything that was in Miller's original graphic novel is in the animated feature--but it is presented in a slightly different way. The animators try to live up to Miller's iconoclastic milieu....but in my opinion it just doesn't have Miller's spirit. It's not a bad adaptation...in all fairness, it is probably the best that could have been done, considering the format and the material. (By the way, Frank Miller had nothing to do with this animated feature.)

The movie tries to imitate Miller's visual style--but at the same time, it doesn't try to go to far with it. There are many scenes and characters which still look relatively normal. Several of Miller's iconic comic panels are reproduced, but they stand alongside a number of scenes that don't look like Miller's work at all. I think the animators felt that two and a half hours of pure Miller might have been a bit too much for some viewers.

This feature is rated PG-13. In all honesty, any real adaptation of The Dark Knight Returns would have to be rated R. The animated version is a bit watered down--but make no mistake, it is definitely not for kids (even though I saw it placed in the Kids movie section at my local Target).

I guess in the end no matter how the animated movie came out, it would in no way match up to the game-changing impact that Frank Miller's original concept had. The Dark Knight Returns is almost a genre unto itself, and any attempt to transpose it to a standard narrative form will feel a bit lacking. I do have to give credit to DC and Warner Animation for trying.

The extras on this Deluxe Edition may excite comic book geeks more than the feature. There's a 78-minute documentary on Frank Miller and his creation of The Dark Knight Returns. This is highly recommended, mainly due to the fact that Miller himself appears in it. There are also other extras discussing plot points involved in Miller's work, and a talk with director Jay Oliva on the adaptation process (which wasn't as illuminating as I thought it would be). Another interesting extra is a short look at the life of Batman creator Bob Kane, which reveals that the man had a rather complex personality.

I think this Deluxe Edition is a worthy purchase, simply for the extras alone. The feature itself is well done--but it is certainly not as good as the original comic. In the end this edition is more for major Batman comic book fans (notice I didn't say Batman movie fans).