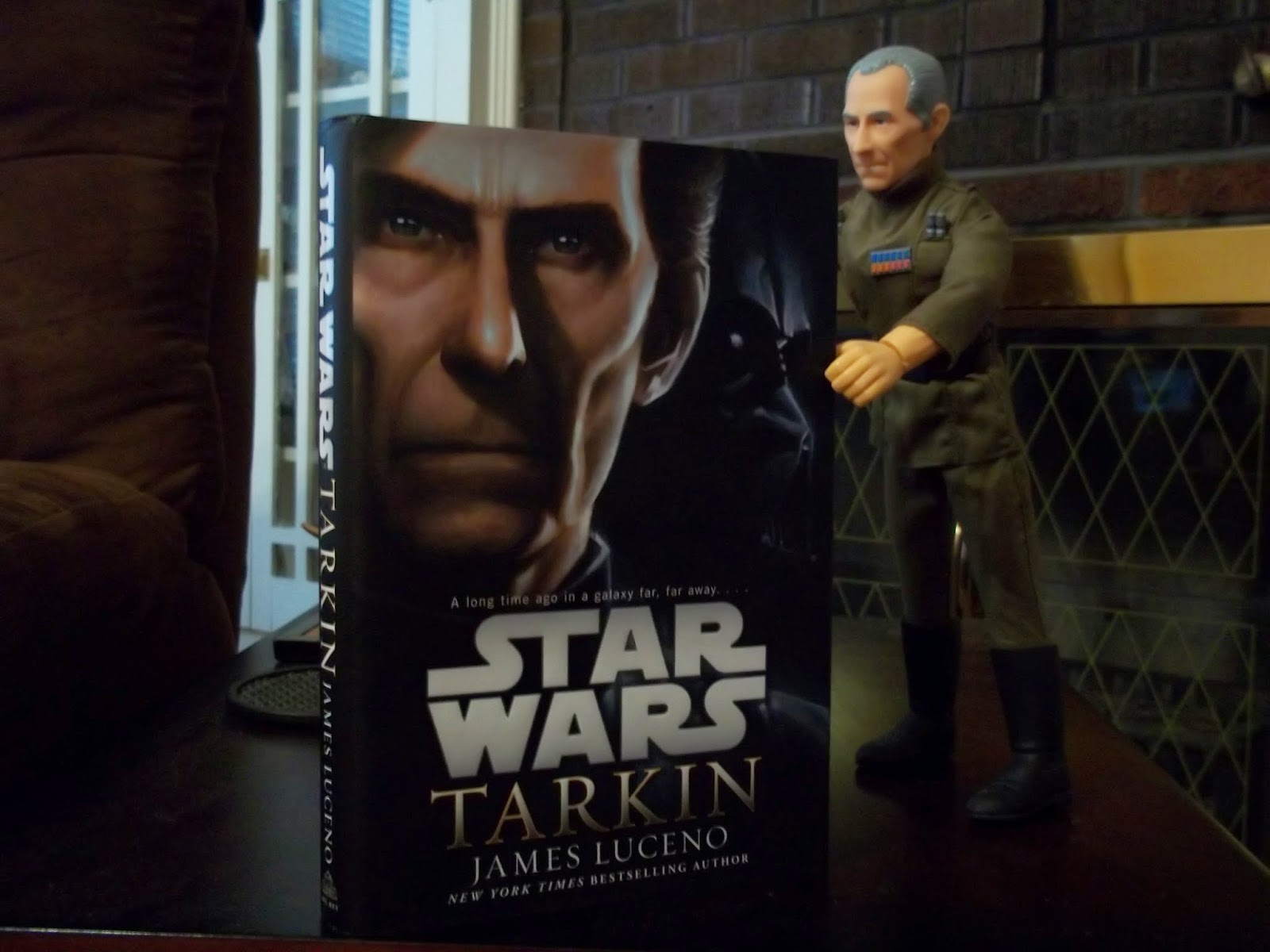 Disney/Lucasfilm have announced that from now on, any new Star Wars novels or non-movie material will be considered "official" Star Wars history. There's always been a debate among Star Wars fans on how important the Expanded Universe is to the franchise, and I think this is Disney's way of controlling the product and giving fans a reason to buy more merchandise--if it's "official" it's worth spending money on, right?

The novel TARKIN was written by James Luceno, a veteran of other Star Wars books. The novel begins five years after the end of REVENGE OF THE SITH. Outer Rim Territories Governor Tarkin is busy overseeing construction efforts on the new Imperial Mobile Battle Station (the future Death Star). A mysterious cache of communication devices has turned up, and the find is of such importance that Emperor Palpatine sends Tarkin and Darth Vader to investigate the matter. Tarkin and Vader wind up dealing with a group of dissidents who manage to steal Tarkin's personal spaceship.

Intermixed with the main story are several flashbacks detailing Tarkin's experiences growing up on his home planet of Eriadu. Tarkin is taken on numerous survival outings by his relatives in the wilds of Eriadu, and writer Luceno attempts to show how these outings have shaped Tarkin's forceful, cold-blooded manner. Luceno tries very hard to portray Tarkin as a hardened, rough type of man....a far cry from the somewhat fussy bureaucrat we saw in the first STAR WARS film.

One of the flashbacks concerns a sequence where Count Dooku tries to convince Tarkin to bring Eriadu into the Separatist fold during the Clone Wars, which could be defined as a Peter Cushing-Christopher Lee scene (Luceno had to have written this part with Cushing & Lee in mind). The book features numerous exchanges between Tarkin and Darth Vader, but their personal relationship isn't really explored all that much, other than they seem to have a grudging respect for one another.

What makes the TARKIN novel different is that it is written from the Empire's point of view. This also makes it harder for a reader to get into it--Tarkin certainly is not an easy guy to root for. The story isn't a thrilling page-turner, either--the main plot doesn't really make any big impression on the Star Wars Universe as a whole, other than showing what may be the beginning of the Rebel Alliance. The book has a ton of techno-jargon which might bewilder those readers who are not hardcore Star Wars or science-fiction fans.

The thing I took away most from this book is....at the end of it, I still didn't know much about the main character. Yes, he's shown as a cold-blooded guy from a cold-blooded family, but he still remains a mystery. While I was reading TARKIN I tried to imagine a younger Peter Cushing doing the things the character is described as doing, but that picture just didn't come together. As a Star Wars and science-fiction novel, I would rate TARKIN as about average. I don't think it is a book that Star Wars or Peter Cushing fans have to read.
Posted by Dan Day, Jr. at 2:07 PM