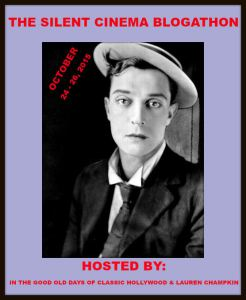 Participating in The Silent Cinema Blogathon gives me another chance to express my admiration for the artistry of Buster Keaton. I could have picked any one of Buster's silent titles, but SEVEN CHANCES happens to be a personal favorite of mine.

Last year I wrote a blog post on my five favorite movie sequences. The final chase sequence in SEVEN CHANCES made the list. That chase is a breathtaking piece of cinematic work, and it still wows audiences to this day. It is more than just a funny routine--it is a spectacular example of why Buster Keaton was more than a great film comic, he was a great filmmaker, period.

Buster is credited as director on SEVEN CHANCES, but the fact is that on all his silent movies Keaton was the real guiding force. Buster's full-length silent features are notable not just for the intricate gags, but for how visually expansive they are. In his pre-sound work Buster uses real city streets, trains, automobiles, lakes, rivers, large groups of people, and even Mother Nature to give his films a quality even few "serious" movies of the time could match.

In SEVEN CHANCES, Buster plays broker Jimmie, who finds out that he and his partner have been swindled. If they don't raise money soon, they'll be in big trouble. Fortunately Jimmie is left $7 million dollars through an inheritance--but he has to be married by 7 PM to collect the money.

Jimmie tries to propose to his true love, but he bungles it. He then proposes to seven different acquaintances--the "seven chances" of the title--but he finds no luck with them either. Jimmie's partner resorts to placing an ad in the paper, revealing that Jimmie stands to inherit $7 million. This of course does the trick, and now Jimmie has more prospective brides than he can handle.

Buster builds the climax slowly, with shots of brides making their way to the church by any means possible. Jimmie is already at the church, but he has fallen asleep on the front pew, so he is unaware of the growing mob gathering behind him. Soon the church is filled with veiled women in white, and an awakened Jimmie has to run for his life.

Buster shot most of the chase on real Los Angeles city streets. Seeing hundreds of brides chasing Buster down actual locations is an arresting image, and Buster makes the most of it. The bridal mob becomes something of a character in itself, a real-life monster about to devour Keaton. Only by Buster's quick wits--and his quickness of feet--is he able to keep ahead of the ladies.

One thing I always notice when watching this sequence is how athletic Buster is. When he runs it's like looking at an Olympic sprinter. Very few people can look graceful while running, but Buster does it so naturally the viewer is astonished by it. Most comedians would have run in a "funny" manner, but Buster uses his physical prowess to enhance the gags, instead of making his running the gag. Buster's talent at leaping and sliding also come into play during the chase, and they are all the more impressive when one realizes that Buster is doing the stunts, and the stunts are for the most part real. There's some camera trickery involved, but mostly it is Buster running and leaping about with an abandon that would make even Douglas Fairbanks Sr. tired.

The capper to the SEVEN CHANCES chase sequence is Buster running down a hill and dislodging some boulders. The boulders roll down the hill and dislodge even more boulders, and Buster has to out-run and out-dodge dozens and dozens of large rocks. Obviously most of the rocks were fake, but it makes for a dazzling scene visually. Many other movies and TV shows have tried to do variations on the rock slide scenes, but no one can match Buster Keaton's way of doing it.

It has to be pointed out that the rock-slide part of the chase is edited to perfection--it still holds it own with any sequence of an action-adventure movie made today. And mentioning an action-adventure movie allows me to declare that Buster Keaton was one of the greatest action stars in cinema history. I know when one thinks of action stars one naturally has thoughts of shoot-outs and violent confrontations--but think back on all the incredible stunts Buster did. How many modern action stars can hold a candle to Buster's body of work? Also take into account the fact that Buster wasn't doing these stunts in front of a green screen, and he wasn't be augmented by any CGI. Buster moves with a grace and fluidity that puts the actors in today's comic book sagas to shame.

You don't need to look at just SEVEN CHANCES to be overwhelmed by Buster's technique--check out THE GENERAL, THE NAVIGATOR, STEAMBOAT BILL JR., and many others. Sadly, once sound came along, and Buster moved to MGM, the large-scale set-pieces--and the frantic energy that Keaton displayed--were gone.

Luckily, Kino has preserved Buster's best work with a magnificent line of Blu-rays dedicated to his best silent films. They show that Buster was more than a guy who fell down a lot--he was a cinematic genius, and one of the best silent-film directors (and performers) of all time.

I realize that an appreciation for silent cinema is a rare thing these days. Many of my non-movie buff friends (I refer to these folks as "civilians") believe that I am crazy to sit around and watch movies without sound...and that I would actually enjoy doing it. Silent cinema is pure cinema, and at its best it is as beautiful an art form that has ever existed. Buster Keaton would tell you he was just trying to make people laugh, but he played a large part in the art form known as silent cinema. Every time I see one of Buster's silent films, I come away with a feeling of joyous wonder.