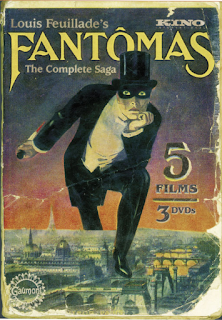 I first became aware of the work of French film director Louis Feuillade after purchasing Kino's FANTOMAS set on DVD a couple years ago. The set contains five films, made in 1913-14, dealing with the adventures of master criminal Fantomas.

What amazed me about the films was even though they were somewhat primitive, just about every action or police story cliche is contained in them. The super-criminal Fantomas is an obvious predecessor to Dr. Mabuse, the James Bond villains, and even the superhero foes of today.

Fantomas is a master of disguise, and he can strike at any time, at any place. He seems to have an unlimited source of funds and equipment to carry out his bizarre schemes. But the viewer is never given any reason why Fantomas does what he does. He has no back story, no flashbacks explaining his character, or no scenes written to make him more "human". He exists, it seems, only for the chase. In some ways this makes him even more dangerous than the usual movie villain.


The five Fantomas films total about 330 minutes running time, and they contain as many unbelievable plot twists as any adventure serial from the 30's and 40's, or any Michael Bay movie of today. The Fantomas series was hugely popular, and Feuillade followed it up with LES VAMPIRES, filmed in 1915-16. 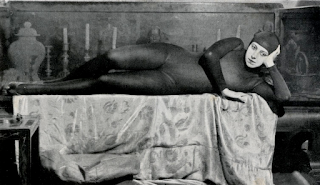 With LES VAMPIRES, Feuillade ups the ante by having not just one super-criminal, but an entire super-criminal group, the Vampires. Feuillade also gives the journalist hero an annoying comic sidekick (sound familiar?). LES VAMPIRES is made of ten episodes, and it clocks in at 7 1/2 hours. It's even wilder and more fantastic than FANTOMAS. But what really sets it apart is the inclusion of the Vampire's best agent, Irma Vep, played by Musidora.

Irma Vep is a tough, sexy, woman of action who at various times dresses in form-fitting black--nearly a century before Scarlett Johansson's Black Widow and Anne Hathaway's Catwoman. She has the ability to seduce and kill just about every man she meets. She's far and away the most interesting character in the series. When she's not on the screen, the story just doesn't have the same excitement. But just like Fantomas, she's a total mystery. In a 21st Century film, her character would be "explained" to the audience.

Seven and a half hours might seem way too much for a silent adventure serial, but LES VAMPIRES is packed with booby traps, poison gasses, bombs, portable cannons, incredible coincidences, secret identities, amazing stunts, fantastic escapes, car chases, gunfights, etc. Feuillade filmed on a number of actual locations around Paris. While watching this, the viewer comes to the unnerving realization that this isn't some production designer's version of 1915 Paris--it's the real thing. There's also an even more unnerving realization...when LES VAMPIRES was being filmed, not too many miles away, thousands and thousands of Feuillade's fellow countrymen were dying on the battlefields of World War I.

That war has no bearing on FANTOMAS or LES VAMPIRES. Feuillade's world doesn't have time for it. The labyrinthine plots that Feuillade's villains set into motion are so complicated, that one wonders why they just don't do a simple bank robbery. Fantomas and the Vampires are always posing as someone else. They lead double--and sometimes even triple--lives. They are obviously greedy, but with all the time they spend on their scheming, how in the heck can they spend the money that they steal?  It seems that every other person in Paris works for the bad guys. Feuillade uses the City of Light as a giant playset for his outlandish stories.

LES VAMPIRES has just been released on DVD and Blu-ray by Kino Video. The picture quality is pretty decent, considering that it's 97 years old. It was restored under the supervision of Feuillade's grandson, Jacques Champreux. When it comes to silent movies on home video, Kino can't be beat. I have spent a ton of money on their product.

I know that most people won't touch a silent movie when a ten-foot pole. One of the things I have learned from watching silents is that most of the "brilliant" film techniques that we assume originated in the "modern age" were actually there all along. Louis Feuillade isn't just some obscure name--he's the original Jerry Bruckheimer. All the "cool" action and adventure films and TV shows are really not that far advanced from the work of Louis Feuillade. 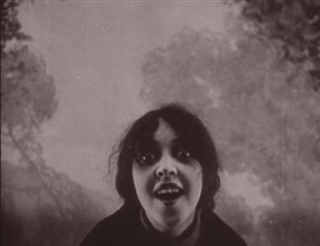