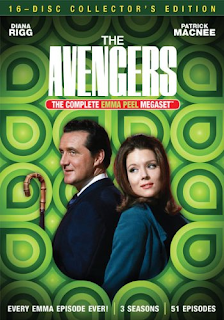 "The Avengers: The Complete Emma Peel Megaset" is a re-issue of a DVD set that had come out a few years ago. When this collection was first released, the list price was over $100. I got this latest version of the set for $35 from Amazon.

"The Avengers" (I'm sure you all know by now that I'm not talking about a comic book) was the witty and stylish British TV action/adventure series from the 1960s. This set contains all 51 episodes featuring Diana Rigg as Emma Peel. "The Avengers" was produced before Rigg came aboard and still continued after she left, but most agree the Emma Peel era was the show's apex.

John Steed (played by Patrick Macnee) and Emma Peel remain to this day two of the greatest characters in television history. Even though the episodes in the set were filmed in the mid-60s, they hold up rather well. "The Avengers" wasn't set in a realistic England anyway--the show has a timeless quality to it due to the fantastical nature of the stories. The bizarre plots and the eccentric villains are just as inventive as anything shown on TV in the present day.

What makes this set notable for a film buff is the incredible amount of acting talent involved in these episodes. If you are a fan of Hammer Films, literally every show in this set includes a performer with a connection to the British studio. Here's a partial list:

"The Avengers" had a style and a look of it's own--one reason being that many of the directors who helmed the episodes had feature film experience. Among the directors credited in this set whose names will be familiar to movie buffs are Roy Ward Baker, Charles Crichton, James Hill, Peter Graham Scott, and Robert Day.

This set is a whopping 16 discs. If you do buy this set, watch out when you open it--the disc trays flop open rather easily, and the discs could fall out. Unfortunately the discs are stacked two to a tray--a common practice these days. The packaging could have been way better but then the set probably wouldn't have gone down in price. The discs appear to be the exact same ones on the earlier sets--which means they have not been remastered in any way.

"The Avengers: The Emma Peel Megaset" is definitely a good buy if you can get it for the price that I did. It's one of my favorite TV shows of all time, and almost no actress looked as good as Diana Rigg did in 1966.