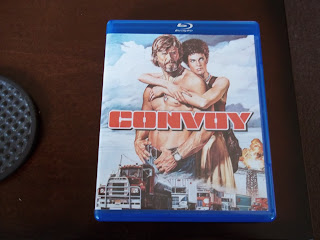 If Sam Peckinpah had made a version of SMOKEY AND THE BANDIT.....well, in a way, he did--and it has just been released on Blu-ray from Kino Lorber: CONVOY, from 1978.

For those that are annoyed by movies based on video games and Lego toys, consider that CONVOY is based on a hit novelty-country song about American truck drivers. CONVOY went on to gross more money than any other Sam Peckinpah-directed film--but it did more harm to Peckinpah's career than good, and very few people today would consider the end result a classic.

Kris Kristofferson stars as a legendary trucker with the CB handle of "Rubber Duck". The Duck gets caught up in the machinations of corrupt Arizona sheriff "Dirty Lyle" (Ernest Borgnine). After a truck-stop brawl with Lyle and his deputies, Rubber Duck and some of his trucker buddies head out on the road and form a huge convoy--a convoy that gets so huge it attracts the attention of the media and local politicians.

Apparently the convoy is some sort of protest--but what the protest is about, and why so many truckers are actually joining the convoy, never really gets explained (heck, the truckers themselves don't seem to really know what they are doing). On the surface it would seem that Rubber Duck is just another in a long line of Sam Peckinpah's typical movie leading characters--a man so independently stubborn he winds up hurting himself and those around him. The problem is that the tone of CONVOY shifts so much that it's hard to take the truckers seriously. Most of the time it plays like a dumb 1970s action-comedy (which I think is what the producers of the film really wanted). At other times it tries to be more, such as when the truckers' dealings with the media & politicians resembles something out of a Frank Capra movie. At the end it's hard to decide what the movie is supposed to represent (and the fact that Peckinpah was fired before the final edit doesn't help).

The character of Dirty Lyle changes tone constantly as well. At the beginning of the film he's mean, petty, and vicious, but soon he becomes almost a cartoon villain. Towards the climax Dirty Lyle appears to show sympathy for Rubber Duck...even as he is trying to blow him away with a machine gun!

CONVOY does has enough stunts and crashes to satisfy most 1970s action fans. This may not be Peckinpah's personal cut of the film, but it still has a lot of his trademarks in it. Most of the main cast had worked for Peckinpah before--in fact Kris Kristofferson had already played an outlaw that got the attention of the Governor of New Mexico for Sam in PAT GARRETT AND BILLY THE KID. Ali MacGraw, who was in THE GETAWAY, is the female lead here, but her character really has no point at all--she's apparently supposed to be a fashion photographer who gets caught up in the proceedings. MacGraw is also saddled with in what my opinion is a very bad short-perm haircut--I think she looks way better with longer hair.

The circumstances surrounding the making of the film are probably more interesting that the film itself. The movie's chaotic production is well covered by the extras on this Blu-ray. First of all is a 73 minute documentary on the making of CONVOY, which reveals that Peckinpah (who already had a long history with alcohol) was taking cocaine during the shoot. The documentary features a number of on-set photos which show how badly Peckinpah looked at the time--he was in his early 50s during
filming but he looks at least 20 years older. There's also interviews with Kris Kristofferson, Ali MacGraw, and Ernest Borgnine....but the best talk is with EMI executive Michael Deeley. Usually whenever there is a discussion about tempers between a director and a producer, the director is almost always portrayed as the aggrieved party, and the producers are portrayed as soulless and money-hungry. Here Deeley is allowed to calmly explain his side of the story, and explain why Peckinpah was just about impossible to work with. Sam Peckinpah was a great talent, and he is one of my favorite movie directors of all time--but the fact is that he annoyed or offended nearly all of those he came into contact with. Film buffs constantly complain about how "they" wouldn't let Peckinpah do what he wanted--I'm amazed that Peckinpah got ANY movie made, period.

An audio commentary is on this Blu-ray as well, featuring Peckinpah experts Nick Redman, Paul Seydor, and Garner Simmons. These men have been involved in audio commentaries for most of Peckinpah's other films, and listening to them collectively is like attending a film studies course on the director. This one is different in that the trio do not like CONVOY very much, and as a result they spend most of the time discussing Peckinpah's failing state of mental & physical health, and the connection that had with his failing career. The many other extras include trailers, radio and TV spots, and production stills.

CONVOY is basically a goofy 1970s action-comedy. The fact that Sam Peckinpah was involved in it makes it a bit more notable. The background of the making of CONVOY is the most notable thing about it, and film buffs will probably be more inclined to buy this Blu-ray than a general audience. This movie had not been available on North American home video for awhile, and once again Kino Lorber has to be given credit for releasing a great presentation of a no-so-great film.