On this day exactly 200 years ago, a large Anglo-Allied army under the command of Arthur Wellesley, Duke of Wellington, fought Napoleon Bonaparte's Armee du Nord twelve miles south of Brussles in what is now Belgium. The huge battle changed the course of European history, and it is the subject of a film that I believe does not get enough respect from lovers of the epic historical genre. The movie is WATERLOO (1970).

Italian producer Dino DeLaurentiis had tried for years to bring a dramatization of the Battle of Waterloo to the screen, and he finally entered into a partnership with Mosfilm of the Soviet Union. This partnership enabled the production to use the resources of the Soviet Army, not only as extras, but as labor in "creating" a reproduction of the site of the battle in the Ukraine.

Russian director Sergei Bondarchuk was hired to helm the project. Bondarchuk had already made a mammoth film version of WAR AND PEACE, so he was familiar with large battle scenes and the Napoleonic Era. The battle scenes for WATERLOO used 20,000 soldiers of the Red Army, and a full brigade of Soviet cavalry. The battle scenes took a staggering 48 days to film.

I've seen plenty of war movies, and I have to say that out of all of them, WATERLOO, hands down, has the most spectacular battles. This movie has to be seen in widescreen so the viewer can take in the full panorama of the spectacle. I have never served in the military, and I've never experienced any real military action.....but WATERLOO is the only movie where it actually looks to me that a real battle was fought. The scope of the fighting is tremendous--the cavalry charges, the cannons going off, the thousands and thousands of soldiers being used, and the smoke and confusion of war. And there is no CGI whatsovever--everything you see in this movie is real.

WATERLOO stars Rod Steiger as Napoleon and Christopher Plummer as the Duke of Wellington. Steiger has come under a lot of criticism for his portrayal of Napoleon--many see his performance as way over the top. Personally I think his Napoleon is magnificent. Steiger is over the top....but he should be. You can't have a understated Napoleon. The French Emperor was one of the most charismatic and magnetic personalities in world history, and whenever an actor has to play him, that actor has to try and live up to the real man. Steiger acts his heart out--he makes Napoleon emotional, cunning, arrogant, and impetuous. I would say that Rod Steiger is the best out of all of the cinematic Napoleons.

Christopher Plummer makes a very haughty Wellington. Unlike Napoleon, Plummer's Duke is a cool and crafty aristocrat. Steiger has the far more showier role as Napoleon but Plummer does very well matched against him.

Most of the other roles in the film are almost paper thin. We don't get to really know much about Wellington and Napoleon's subordinates and associates. If you are not a military history buff, you will probably be lost trying to watch this film. I'm certainly no expert when it comes to the Battle of Waterloo, but from what I have read and researched, the movie does an excellent job of following the main aspects of the conflict for the most part. But there is very little explanatory dialogue--one enjoys this movie a lot more if one has a basic understanding of Napoleon and this point in history.

WATERLOO was not a big success when it was released, and I can certainly see why. This is not in any way what could be called a "mainstream" film. How can ordinary members of the audience relate to larger-than-life figures such as Napoleon and the Duke of Wellington? The movie does have a very minor character, an English soldier, as a sort of comic relief/regular person part.....but the role is so small he doesn't have much of an impact on the film. It is never explained exactly why Napoleon has to be stopped....if you don't know any of the basics surrounding the story, watching this film is kind of like viewing a sporting event where you have no idea who the participants are. Unless you are a European, you're not really going to have much of an emotional attachment to any of the people portrayed in this movie, or any of the events being shown.

That being said, this movie is worth seeing just for the majestic battle scenes alone. My favorite part of the film is where the French cavalry charge, and Wellington's troops form into squares to better fight the onrushing foe. What we get is a helicopter's eye view of hundreds of troops forming the squares as hundreds of horses speed by, in, and around them. The result is simply breathtaking....it must have been fantastic to see this on a big screen.

And that's the big problem with WATERLOO. It needs to be seen on as big a screen as possible. My region-free DVD of the movie is non-anamorphic, and it is subtitled in Chinese, which makes me think it is an "unofficial" copy (I bought it from Oldies.com). As far as I know, there is not an official Region A DVD or Blu-ray release of this film, which is a shame. My DVD runs about 127 minutes--I've read rumors that the Russian version of the film is almost four hours long. A movie like WATERLOO simply cries out for a Blu-ray restoration. With the 200th anniversary of the battle, I was hoping that someone would officially release the film on home video, or that a cable movie channel would show the film in HD. No such luck.

If you do get a chance to see WATERLOO, by all means do so--especially if you have any interest in military history. If you think you've seen some great movie battle scenes, you haven't seen anything until you see WATERLOO. 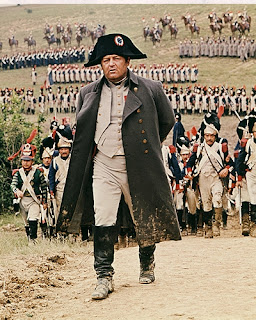