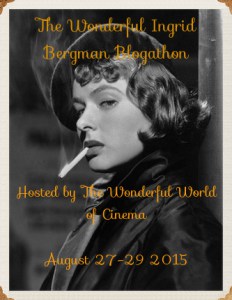 Ingrid Bergman is one of my favorite movie stars of all time. She was one of the most naturally beautiful women ever to appear on screen, and along with that beauty she had a naturally appealing personality that drew audiences to her.

For the purposes of this blogathon, I chose an Ingrid Bergman film that many of her fans have probably never even seen. JUNE NIGHT (original Swedish title: JUNINATTEN) was the last movie Bergman made in her native Sweden before resettling in the United States--this production was even released after Ingrid appeared in the American remake of INTERMEZZO in 1939.

In the liner notes for Kino's INGRID BERGMAN IN SWEDEN box set, it is stated that "Bergman could portray suffering and torment better than almost anyone", and JUNE NIGHT gives her plenty of opportunity to do so. The actress plays Kerstin Norbeck, who in the beginning of the film is shot be her angry lover. Kerstin's life is saved by radical heart surgery, but her troubles have just started. During her lover's trial it is Kerstin's behavior that is called into question, and the girl receives so much bad publicity that she moves away from the prying eyes of her small Swedish town and travels to Stockholm, where she changes her name and gets a job at a drugstore. Kerstin, who now goes by the name Sara Nordana, moves into an apartment with three other girls and attempts to start a new life. But the young woman is consumed with feelings of guilt and shame, and her past eventually catches up with her.

JUNE NIGHT is very much a soap opera-type of tale. Even while being troubled Bergman still looks gorgeous, and in the film she captivates every man she meets (can you blame them?). Even her roommates' boyfriends are smitten by her, which has major complications on the plot. Kerstin Norbeck is a well-meaning person who just wants to find peace and acceptance, but she has been "branded" by her lover's criminal act. This movie may have been released 75 years ago, but it is still relevant today--just think about what happens to many women who are victims of sexual and physical abuse when they choose to speak out.

What one especially notices when watching JUNE NIGHT is how perfectly natural Bergman's acting is. The movie's story may be a bit contrived, but Bergman certainly isn't. She already had almost a dozen movies on her resume when she worked on this feature, and it's easy to understand why Hollywood was taking an interest in her.

This movie is part of the INGRID BERGMAN IN SWEDEN DVD box set from Kino, which also includes the original Swedish versions of INTERMEZZO and A WOMAN'S FACE. Bergman aficionados should definitely check this set out. All three features look magnificent, and even though the dialogue is in Swedish, English subtitles are provided. When I watched this set for the first time I was impressed with overall quality of each movie. These are not Hollywood productions, but they hold up rather nicely against any American films of the same period. JUNE NIGHT, for example, has fine direction by Per Lindberg, who uses numerous close-ups, and moody black & white cinematography from Ake Dahlqvist. I'm no expert on the Swedish film industry of the 1930s, but going by the titles in this set the Swedes were very proficient in the cinematic arts.

After JUNE BRIDE Ingrid Bergman would go on to America and become one of Hollywood's biggest screen stars. Her mainstream film career would be derailed for a few years due to her personal and professional relationship with Italian director Roberto Rossellini, but she would return to Hollywood's good graces and become a cinema legend. Every time I watch this woman in a film I can't help but fall in love with her. Obviously she was physically attractive but there has to be more to it than just that. Ingrid Bergman had "It"--that indefinable quality that made audiences want to watch her and feel protective of her. JUNE NIGHT proves that even before she went Hollywood, she had "It". Her Swedish film performances may not be as well known as CASABLANCA and GASLIGHT but they are an important part of her screen persona, and those who admire this extremely talented woman are advised to seek them out. 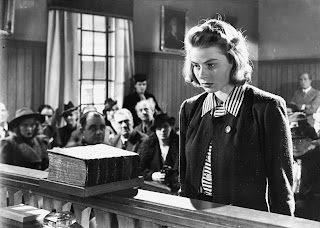