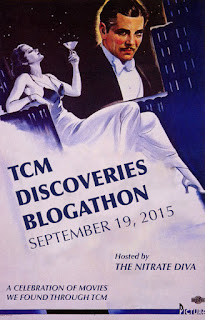 I can't tell you how many great movies I have seen for the very first time on the Turner Classics Movies cable channel. What I love most about being a film buff is "discovering" a film I had never heard of, or a film I assumed I would have no interest in. It's too easy for film buffs to watch the same movies over and over again. Being able to see something you have no knowledge of, and being pleasantly surprised by it, is a fine way to recharge one's cinematic batteries.

One of my most memorable TCM "discoveries" is 1940's REMEMBER THE NIGHT, starring Barbara Stanwyck and Fred MacMurray. The movie was produced at Paramount, and it was directed by Mitchell Leisen and written by Preston Sturges. On the surface it appears to be a typical classic screwball comedy--a man and a woman, who have totally different personalities, are stuck together in a situation that both of them do not want to be in--but REMEMBER THE NIGHT is much more than that.

Barbara Stanwyck plays Lee Leander, who is arrested for shoplifting in New York City right before Christmas. The case is prosecuted by rising young D.A. John Sargeant (Fred MacMurray). Sargeant gets the trial postponed until after the holidays--he's more worried about going back home to his family in Indiana. Sargeant pays Lee's bail so she doesn't have to spend Christmas in jail. Lee complains that she has no money and no where else to go, so Sargeant winds up taking Lee to Indiana with him when he finds out that she has family in Indiana too.

One can easily figure out that Lee and John will start falling for each other on the trip, but things get to be more complicated than that. The couple wind up getting into trouble for trespassing in Pennsylvania, and Lee gets them out of it by starting a fire in the courthouse. The scene is funny, but it also shows the audience that Lee's value system is somewhat skewed.

When the two finally get to Indiana, the movie takes a dark turn. Lee's family home looks like a haunted house, and her mother wants nothing to do with her, calling her a thief. The meeting devastates Lee, and it lays out the case that she has major emotional problems.

John decides to take Lee to his family's home. Lee is warmly welcomed by his family, and the love and kindness that they display have a profound effect on Lee. This is another sequence that defies the viewer's expectations--at first it seems Sargeant's relatives are going to be portrayed as stereotypical country folk, but they wind up being well-rounded and human. Lee experiences a type of lifestyle she's never had, and badly needs.

John's mother (Beulah Bondi--who else?) senses that Lee is falling for her son, and she goes out of her way to tell her that John has worked hard to get to his present position, and he has a bright future ahead of him. Lee of course is all too aware of this, and all too aware that her past would hurt John's career. The young prosecutor is falling for Lee as well, but both of them know that there is something hanging over their heads--the fact that soon they will have to go back to New York and deal with Lee's trial.

I would love to discuss the ending of REMEMBER THE NIGHT, but I simply can't, because I want those who have not seen this film to experience it for themselves. Let me just say that there is no standard Hollywood contrived climax where everything comes out all right in the end. The movie ends on a vague, unsatisfying note--just like real life does.

I think the reason why REMEMBER THE NIGHT stays in my memory is that the movie wasn't anything like I expected. Instead of a rollicking romantic comedy with wacky characters, we get a long discussion about the definition of law and justice and right vs. wrong between Sargeant and Lee. What's noticeable about Lee is that she is almost a 21st Century character. She has many issues, and deep emotional problems. The movie makes no bones about the fact that Lee will steal, or lie, or cheat, to get what she wants. Even so the viewer is still sympathetic to Lee, and that is due to the brilliance of Barbara Stanwyck, who shows that the woman is all too aware of her failings.

REMEMBER THE NIGHT is also a Christmas movie, and like most great features set during the holidays, there is a sense of longing and melancholy. The love and warmth of John's family during their Christmas reunion is contrasted with the emptiness of Lee's life. The result is that despite a then-in-force Hollywood production code which demands that Lee pay for her crimes, the audience does not want her to go to jail--serving time would probably send a person with Lee's emotional problems down a far darker path.

Before I had seen REMEMBER THE NIGHT for the first time on TCM, I had never even heard of the movie. Now I consider it one of the best films of the late 1930s, and one of Barbara Stanwyck's best performances. If it wasn't for TCM I might not have ever seen this movie....or dozens of other films I could mention. Hopefully TCM will continue to show those classics that don't seem to get the attention that they deserve.