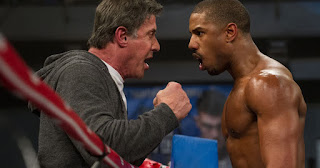 A lot of people find it easy to make fun of Sylvester Stallone, but the man is a pop-culture icon. He has been a part of three different highly successful film franchises, and not just as an actor--he's also written and/or directed entries in each of those three series.

His greatest work has to be the creation of Rocky Balboa. The character of Rocky is ingrained into the modern-day collective world consciousness. Whenever a Rocky in-joke is used, everyone will get it--even those that say they don't like the Rocky movies. It's amazing when one realizes that Stallone has been playing Rocky now for a span of almost 40 years. Has any other performer portrayed the same character on the big screen for as long a period? I can't think of an example as I am writing this.

A couple of generations have grown up watching the Rocky films, and the result is that millions of film goers are more familiar with Rocky's fictional life than they are the lives of most of their relatives. The general public has a true affection for Rocky--an affection that very few 21st Century film characters receive. All the Rocky movies are entertaining and well-done--even the much-maligned ROCKY V is a lot better than most give it credit for.

That affection is one of the reasons why the latest entry in the Rocky saga, CREED, works so well. You care about Rocky, and you want to see good things happen to him. Sylvester Stallone projects such an earnest ordinary likability as Balboa that you can't help but root for him.

But as the title of the film reveals, CREED is more than just the continuing story of Rocky. The actual main character is Adonis Johnson, played very effectively by Michael B. Jordan. Adonis is the illegitimate son of Rocky's old rival/friend Apollo Creed (Adonis was born after Apollo's death in the ring at the hands of Ivan Drago in ROCKY IV).

Having an entry to a film franchise revolve around the son of a long-dead supporting character is an inventive concept. When I first heard about it I thought it sounded too gimmicky, but co-writer/director Ryan Coogler makes the situation work by bringing an almost semi-documentary style to the Rocky series. The 1980s excess which flows through ROCKY III and ROCKY IV is nowhere in evidence here.

Adonis wants to be a fighter just like the father he never knew, despite the fact that he lives in relative comfort due to his being raised by Apollo's widow. All those around Adonis refuse to help him in his boxing dream, so he travels to Philadelphia and cajoles Rocky Balboa into being his trainer.

Both Adonis and Rocky have to face personal demons along the way. The storyline--and the climax--may be a bit predictable (there's only so many ways you can make a Rocky movie, after all)--but Coogler establishes the situation and the characters so well that the viewer goes right along for the ride.

There's been a lot of buzz about Sylvester Stallone getting a Best Supporting Actor award nomination due to this film. I don't put much stock into major entertainment awards, but it would be nice to see Stallone get some acknowledgement for his performance in this. I'm sure that any such recognition will be more for his overall career, but that's fine too--he has an impressive resume as an actor/writer/director (movies like OVER THE TOP notwithstanding).

CREED is not just another Rocky movie--it is one of the best films of 2015.