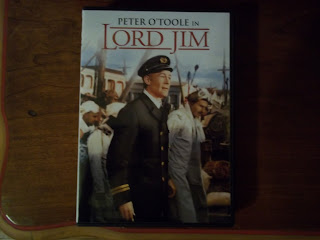 Believe it or not, there are plenty of "old" movies that I have not seen. For some reason or another certain films never get shown on TV, or they do not have a high profile on home video. The 1965 epic LORD JIM is one of those films, at least in my experience. I had never seen this film before until I recently purchased it on DVD from Edward R. Hamilton Booksellers (for only $6). The film is an adaptation of a Joseph Conrad novel (which I have not read), and it was produced, written, and directed by Richard Brooks.

LORD JIM, starring Peter O'Toole in the title role, is a meditation on the true definition of courage and the measure of a man. That description could also fit for many other movies directed by Richard Brooks (such as THE BLACKBOARD JUNGLE, ELMER GANTRY, and THE PROFESSIONALS). The character of Jim (we never really find out his last name) starts out as an idealistic young officer in the British Merchant Marine during the late 19th Century. Jim 's career is going along well until he suffers an injury and, after his rehabilitation, signs on to a disreputable freighter. During a storm Jim is convinced that the ship is going to sink, and he and the rest of the crew abandon ship, leaving all the passengers on board. The ship does not sink, however, and Jim turns himself in to a board of inquiry. His future as a Merchant Officer now ruined, Jim takes any job he can get in the South Seas. The disgraced man finds a chance to redeem himself by helping the population of a small Southeast Asian village defend themselves against a warlord and pirates.

When Peter O'Toole passed away in 2013, I wrote a tribute post to him in which I said that O'Toole usually played "...powerfully charismatic men, men who have a bit of mystery about them, and seem bent on a path of self-destruction." Lord Jim is certainly one of those men. Watching this movie I couldn't help but be reminded of O'Toole's performance as Lawrence of Arabia. One main reason is that O'Toole as Jim sports the same blond hairstyle the actor had as Lawrence. Jim and Lawrence have a lot of similarities to each other--both are English outcasts who hide away from the world that they supposedly belong to, and both men find their true selves by coming to the aid of natives fighting oppression in a far-away land. Both men are also so remote that the audience never really feels that they get to know them. LAWRENCE OF ARABIA is of course one of the most famous movies ever made, and the actual man that the movie is based on was mysterious, so the remoteness is part of the story. In LORD JIM, however, not having a connection with the main character I feel hurts the story. LORD JIM, while a very well-made film, doesn't have the scope and majesty of LAWRENCE--I never felt as if I had an emotional attachment to Jim or his fate.

LORD JIM clocks in at two and a half hours long, and the film is more brooding than exciting. I would call it a "thinking man's" epic. Most of the action happens in the middle part of the film, when Jim leads the natives in revolt against a tyrannical self-styled General played by Eli Wallach. (Wallach is fine as usual but I have to admit thinking that he was channeling his Mexican bandit persona from THE MAGNIFICENT SEVEN). After the General and his small army are defeated, Jim has to defend the village from pirates who are after the General's treasure. The pirates are led by none other than James Mason as Captain "Gentleman" Brown. Mason's philosophical brigand makes a huge impression, and seeing O'Toole and Mason verbally spar with one another may be the highlight of the film. The scenes with Mason gave O'Toole some much-needed verve--he spends most of the story with an anguished expression on his face. That being said, Jim is a character who is guilt-ridden and conflicted--and that may be the type of person one finds hard to watch for two and a half hours.

LORD JIM may not be the most exciting film in the world, but it is very well put together. Richard Brooks was an accomplished filmmaker, and he made the most out of the Cambodian locations used during the filming. Famed cinematographer Freddie Young contributes a number of striking images--this movie deserves to be released on Blu-ray. The supporting cast is filled with legendary names--Jack Hawkins, Curt Jurgens, Paul Lukas, Akim Tamiroff--and Hammer fans will appreciate that this movie features Andrew Keir and Marne Maitland. The only major female role is played by the astonishingly lovely Daliah Lavi, who portrays the native girl Jim falls for. Lavi is so good she almost steals the film (no mean feat considering her cast mates), but she might be a bit too attractive looking for someone living in a poor, backwater part of the world.

LORD JIM is very much the type of "important" epic film one rarely sees anymore. It is a combination of a respected director, famous novel, major cast, and breathtaking locations. It may be too thoughtful and stately for some, but it is worth seeking out.
Posted by Dan Day, Jr. at 3:11 PM