THE MAGNETIC MONSTER On Blu-ray 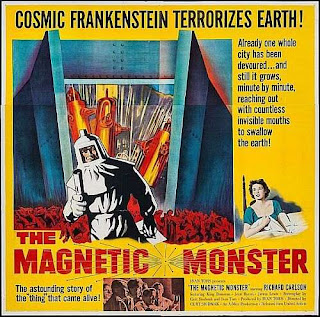 Kino Studio Classics has come out with a Blu-ray of one of the most unusual of 1950s sci-fi flicks: THE MAGNETIC MONSTER.

THE MAGNETIC MONSTER is unusual mainly for the fact that the "monster" is never really seen. A scientist, through his experiments with radiation, has developed a new element that constantly needs to feed on energy. Two "agents" (also known as "A" Men) from the Office of Scientific Investigation (Richard Carlson and King Donovan) find out about the danger from extreme magnetic activity in a hardware store. The OSI soon learns that the element will continue to feed on energy, and continue to grow until the entire planet is affected! The OSI decides that only a massive amount of electricity might stop the "monster", and the element is flown to an experimental underground generator located in Nova Scotia.

THE MAGNETIC MONSTER was produced and co-written by Ivan Tors, who used the OSI organization again in his movies RIDERS TO THE STARS and GOG. This movie almost qualifies as a sci-fi version of DRAGNET, with two "officers" tracking down a dangerous "culprit". (The use of voice-over narration and the rather basic filming style only heighten the comparison.) The only major special effects are at the climax when the generator (called a "Deltatron") is used--and these scenes are lifted from the 1934 German film GOLD! Of course, today it's easy to spot the stock footage--but one must remember that when this movie was made in 1953, nobody in the audience would have been aware of this, and they certainly wouldn't have noticed it.

The use of the stock footage, and the fact that the "monster" is never really properly shown, allows this film to have a very, very low budget (being that it is in black & white and not in widescreen, it doesn't look that much different than an average TV program from the same period). At one point the characters talk about how the element has caused an implosion at a university laboratory--but we are never shown this. The lack of bells & whistles may drive typical 2016 viewers crazy, but if you are a fan of this genre, and willing to accept the situation, you will find that THE MAGNETIC MONSTER is a intriguing little picture with a very different concept from the usual fantastic films released during this period.

What makes this film work in particular is its leading man, Richard Carlson. Carlson had a far more varied acting career than people like me give him credit for, but he's now mainly remembered for his science-fiction movie work in such titles as IT CAME FROM OUTER SPACE and CREATURE FROM THE BLACK LAGOON. Carlson had the unique ability to play a intelligent, determined scientific investigator yet at the same time still come off as a "regular guy". Carlson's character in THE MAGNETIC MONSTER is focused on his job, but he's also worried about his pregnant wife, and trying to decide whether he and she should move out of their apartment and take on a mortgage for a house. If an actor who didn't seem as reliable as Carlson was playing the leading role, it's doubtful anyone watching it would readily buy into its premise.

Also involved in THE MAGNETIC MONSTER was genre stalwart Curt Siodmak, who is listed as co-writer and director. How much involvement Siodmak had is in dispute (many sources list the movie's editor, Herbert L. Strock, as co-director--Strock would go on to direct a number of fantastic films of his own). The real guiding hand behind the production appears to be Ivan Tors, who would later create a TV show called SCIENCE FICTION THEATER which had a number of similar elements (no pun intended) to THE MAGNETIC MONSTER.

As stated before, this film is in black & white, and in standard aspect ratio. This Kino Blu-ray of THE MAGNETIC MONSTER is probably about as good as a low-budget feature like this is going to look. A meandering and unfocused commentary is contributed by Derek Botello, and there are a few trailers for some of Kino's other science-fiction Blu-ray releases.