A Tribute To Svengoolie 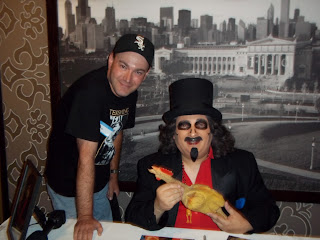 Rich Koz, better known as TV's "Svengoolie", has had to take a break from his show due to some recent health issues. I thought now would be a perfect time to explain what Sven has meant to me.

I've literally been watching this man for over 30 years. Rich Koz started out as "Son of Svengoolie" back in 1979 on WFLD, Channel 32, Chicago. He's just as funny and inventive now as he was back then. In fact, Koz is now probably more popular than ever, due to his being syndicated over the Me-TV Network all over America. If you've never seen a Svengoolie show, it's kind of hard to explain...yes, he's a horror-film host, but his comedy is not just restricted to monster movies. Koz has always mined popular culture, and he's always been able to stay current. Every "Svengoolie" show features a song parody, and Sven has "covered" just about every Top 40 musical act of the past 40 years.

Of course Sven pokes fun at whatever movie he happens to be showing, but he does it in a way that shows he respects classic horror and science-fiction. He laughs WITH the movie, not at it. He always provides bits of information about the films he shows, and he truly knows the genre and the talents behind it. I've seen clips of other horror-movie TV hosts, and most of them couldn't tell the difference between Lon Chaney Jr. and Ken Griffey Jr.

It's obvious that Rich Koz is a Baby Boomer and he grew up watching classic television. The comedy of Svengoolie is family friendly, and it appeals to all age groups. Unlike self-proclaimed "geniuses" like Bill Maher and Jon Stewart, Sven doesn't demean his audience or go out of his way to prove how clever he is. Every Svengoolie show is written by one man--Rich Koz. Unlike today's TV "talent", Koz doesn't have a staff of 20 or 30 writers.

But why am I writing a movie blog about him? The simple fact is, Svengoolie helped make me a film buff. Name just about every classic horror and science-fiction film ever made, and I first saw it on Svengoolie. The great films of Universal, Hammer, American-International, Toho....I first experienced them all through the courtesy of the great Sven.

You have to remember that when I started watching Svengoolie, there were no cable movie channels, no VCRs, no DVDs, no Netflix, no YouTube, none of that stuff. If you wanted to see a great monster movie, you had to rely on Sven.....and there was nobody better to rely on, at that time. I'm sure there are many others who got their first exposure to classic fantastic cinema because of this man. For that fact alone, he deserves the highest of accolades.

In a TV world of Ax Swamp Pickers and Alaskan Dance Preppers, Svengoolie truly reigns supreme. Hopefully, for many, many years to come, the cry of BERWYN!!!! will be heard throughout the land.