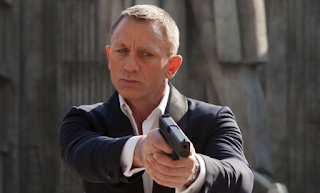 I just watched SKYFALL again on Blu-ray. I discussed this movie a little bit during my post on Daniel Craig (http://dandayjr35.blogspot.com/2012/11/daniel-craig-as-james-bond.html?spref=tw). Here's some more observations (you should see the movie first before reading this):

--The Cinematographer, Roger Deakins, is the real star of this movie.

--In my Daniel Craig post I mentioned how bad guy Javier Bardem seemed to be doing a riff on Heath Ledger's Joker. Maybe I thought that because the whole "bad guy allows himself to be captured so his incredibly intricate and complicated plot can go into motion" thing appears to be "inspired" by THE DARK KNIGHT.

--The climax of the film, where Bond turns his boyhood home into a fortress and takes on Bardem and all his guys by himself, reminds me of a cheesy 80s action flick starring someone like Stallone or Schwarzenegger. It's a very well done sequence, but it just doesn't have a true "Bond" feel to it.

--I still think the movie is about 20 minutes too long.

--Having the 1964 Aston Martin in the film, and actually putting it to use in the climax was cool....but if this is a 21st Century Bond that we've seen from the "beginning", the Aston Martin really shouldn't have a connection to him.

--How come Bond doesn't walk past the gun barrel at the start of the movie anymore? Why do they now have him do it at the end?

--SKYFALL won the BAFTA award (the British version of the Oscar) for Best British Film. I think that says more about the state of the British Film Industry than it does about the quality of SKYFALL.

In the end, SKYFALL is a decent Bond film...but I must admit it's not as great as some make it out to be.