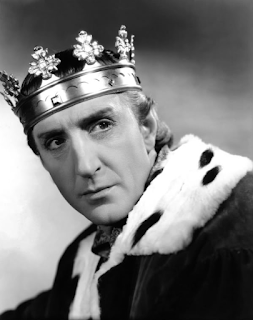 One of the trending topics this week on the internet has been the discovery of the supposed remains of 15th Century English monarch Richard III. I'm no expert on the British Royal family, or the plays of William Shakespeare. But I do know a little bit about films made at Universal Studios in the 1930s. So it's time to pay a visit to the TOWER OF LONDON.

TOWER OF LONDON was made at Universal shortly after the studio's very successful SON OF FRANKENSTEIN. TOWER reunites the Frankenstein film's director (Rowland V. Lee) and major stars (Basil Rathbone and Boris Karloff). On first glance TOWER would seem to be a horror film, but it really isn't. It's more of a historical melodrama...but it does have several thriller-like moments. The movie, while good, winds up being neither fish nor fowl. It falls short of being a Universal monster movie, and it's nowhere near a prestige historical epic.

Basil Rathbone is Richard III, fated to be forever remembered as one of history's greatest villains thanks to Shakespeare. One would expect an actor like Rathbone to let loose and ham it up with this part--but he doesn't. His Richard is quietly cold and calculating. Rathbone doesn't rant and rave--this Richard is always watching, always waiting for an opportunity to put one of his schemes into motion. Some may be disappointed that Rathbone doesn't go all out--but it's a novel take on a role that is considered an actor's dream.

Boris Karloff plays Mord the Executioner, the man who does all of Richard's dirty work. Karloff's Mord, bald-headed and club-footed, is certainly a striking image. Mord is introduced sharpening his axe while a raven perches on his shoulder. Karloff steals the show, even though his role is not all that big--there are long stretches of the movie where Mord does not appear. The relationship between Mord and Richard is an interesting one. Mord worships Richard the way a dog does it's master. Mord even begs Richard to take him into battle, where he can kill in "hot blood". This is one of Karloff's few roles in which he's absolutely evil.

TOWER OF LONDON, like a lot of other 1939 productions, has a standout cast. Among the players are Barbara O' Neil (better known as Scarlett O' Hara's mother), Rose Hobart (who was in the Fredric March version of DR. JEKYLL & MR. HYDE), Nan Grey (a Universal starlet who was in DRACULA'S DAUGHTER and THE INVISIBLE MAN RETURNS), John Rodion (son of Basil Rathbone), and Ian Hunter, who plays Edward IV. Hunter would portray another English king, Richard the Lionheart, in THE ADVENTURES OF ROBIN HOOD. We also get to see a very young Vincent Price as the Duke of Clarence. Price's Clarence is a sniveling, limp-wristed coward, and most viewers will be happy to see him get drowned in the vat of malmsey. Price would get his own chance to play Richard III in 1962 for Roger Corman in another TOWER OF LONDON. Universal monster movie fans will recognize such familiar faces as Holmes Herbert, Michael Mark, and Harry Cording.

One more casting note: little Donnie Dunagan, who was Rathbone's child in SON OF FRANKENSTEIN, and would later provide the voice of BAMBI, makes an appearance.

TOWER OF LONDON may not be a straight horror film, but it does have some gruesome moments, particularly for 1939. There are various tortures, and a feeble King Henry VI (Miles Mander) is stabbed to death while praying (I'm amazed the Hays Office let that scene go through). Of course there are the infamous murders of the Princes in the Tower. It's rare--and surprising--to have any children killed in a movie made during the Golden Age of Hollywood.

I'm no scholar on the War of the Roses, so I can't really say how historically accurate the screenplay is. (It was written by Robert N. Lee, the director's brother.) There are two major battles shown--Tewkesbury and Bosworth. The first battle is staged during a rainstorm and Bosworth, where Richard met his end, is set against a fog. The weather does add atmosphere but it also probably helped hide the lack of extras.

Is TOWER OF LONDON the best cinematic interpretation of Richard III? Maybe not, but with Rathbone, Karloff, and the Universal stock company, it's an interesting take on the subject. 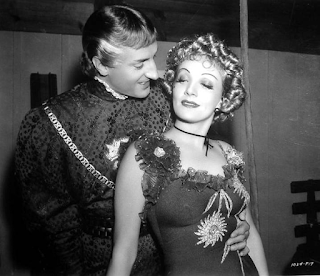 Basil Rathbone, in his Richard III costume, visits Marlene Dietrich, who was at Universal making DESTRY RIDES AGAIN. Now that's what I call a workplace enviroment.