Today is Charlie Chaplin's birthday. A lot of bloggers are writing posts about him, and Turner Classic Movies has been showing Chaplin films all day. I suppose I should write a post....but the thing is, with all due respect to the Little Tramp, I'm more of a Buster Keaton fan.

Mind you, I'm fully aware that Chaplin is one of the great icons of cinema history. He was in all certainty a great artist--he usually wrote, produced, directed, and starred in his own films, and he composed the music for most of them as well. It's just that, in my humble opinion, Buster Keaton's prime work was a lot more entertaining--and a lot funnier.

Whenever I watch Chaplin, I always get the feeling that he's trying a bit too hard to impress the audience. Charlie was a sentimentalist at heart, and he goes right for the viewer's emotions. Buster Keaton never played to the audience's sympathies (at least not until he got stuck at MGM in the 1930s and he had no control over his stories). Keaton goes for the laugh, or the gag. Keaton's best movies are like well-oiled machines--the gags follow each other naturally, and they never seem forced. THE GENERAL is the most perfect example of this. Every little gag or funny incident interlocks with one another. It's as if the action is happening for real instead of being staged.

The Keaton films from the 1920s still hold up today. Keaton, as a director and storyteller, was far more visually innovative than Chaplin. Chaplin never really left his British music hall roots--his directorial style in the 1940s and 1950s is just about the same as it was when he started making movies in the 1910s. Chaplin didn't even make a full talkie until THE GREAT DICTATOR in 1940.
Chaplin certainly wasn't a bad filmmaker...but his movies are ones you admire more than really enjoy. No matter how many times I watch one of Buster Keaton's best entries, I still wind up being amazed at some of the things he did.

The best way to define the difference between Chaplin and Keaton is to quote from Buster's autobiography, MY WONDERFUL WORLD OF SLAPSTICK (co-written with Charles Samuels):

.....Chaplin's troubles began when he started to take himself seriously. This was after he had produced A WOMAN IN PARIS.
......But the avalanche of praise for Charlie's brilliant directing also turned his head, I am afraid. It was his misfortune to believe what the critics wrote about him. They said he was a genius, something I would be the last to deny, and from that time on Charlie Chaplin, the divine clown, tried to behave, think, and talk like an intellectual.

This passage from Keaton's book is very telling. Keaton would never consider himself an intellectual, or a genius, or an artist. He looked upon show business as a job, a profession, something he had been doing since almost the very day he was born. Keaton wanted to make people laugh instead of impressing them.

In 1951 Chaplin asked Keaton to play a role in Charlie's film LIMELIGHT. Keaton discusses this in his autobiography:

.....He seemed astonished at my appearance. Apparently he had expected to see a physical and mental wreck. But I was in fine fettle. I'd just been in New York for four months doing an average of two TV guest shots a week. So I was prosperous and looked it.
"What have you been doing, Buster?" he asked. "You look in such fine shape."
"Do you look at television, Charlie?" I asked.
"Good heavens, no," he exclaimed. "I hate it. I will not permit it in my house. The idea of actors letting themselves be shown on that lousy, stinking, little screen!"

Note the difference between Buster and Chaplin's attitudes. Buster was willing to stay innovative and work with new technology and new methods; the great artist Chaplin considered himself above that sort of thing.

In fact Buster Keaton did a huge amount of television work, including many commercials (there are dozens of them on YouTube). There are a number of books and articles saying that Buster was "reduced" to working on TV, but Buster wasn't reduced to anything. He worked right up to when he died in 1966, and he kept his name and legacy current to a younger audience. If Buster were alive today, he would probably be making comedy videos for his Facebook page, and he'd more than likely have a Twitter account as well.

I realize that liking one actor or director over another is a matter of personal taste. I respect Chaplin and his work...but I actually own just about all of Keaton's silent movies on home video. I own them not because I'm supposed to as a film buff--I own them because I enjoy watching them. Chaplin's output really does seem to be from another age, while Keaton's still has a freshness and sharpness to it.

Charlie Chaplin was one of the greatest figures in the history of popular culture. But I'd rather watch Buster Keaton. 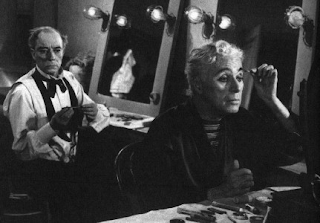