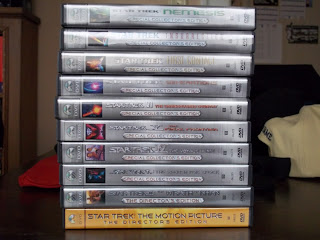 This blog deals with the big screen adventures of the Star Trek: The Next Generation crew. The TNG cast only made four movies, and while none of them are as terrible as say, STAR TREK V, none of them are as great as STAR TREK II. The term "missed opportunities" can certainly apply to the TNG movie era as well. All four films are competently made, and entertaining to watch--but overall they just don't seem to reach that next level of being outstanding or memorable. (Some fans believe there are individual episodes of TNG that are far better than the movies.)

The Next Generation always had a different vibe than the first Star Trek TV series. TNG was more politically correct, more touchy-feely. If Captain Kirk came across an evil computer, he'd just blow it up--the TNG crew would sit around and talk about the computer, then they'd spend more time talking TO the computer. A Star Trek movie is supposed to be popular science-fiction, which means space battles, explosions, impressive FX sequences, etc. All these things were incorporated into the TNG features, and they worked for the most part--but they are plenty of times were certain TNG cast members look a bit uncomfortable acting out their roles. I think it's safe to say that TNG was best served on the small screen.

As in Part One of this blog, movies are listed in my personal order of preference.

This movie is to TNG as WRATH OF KHAN is to the original series. After a very desultory start with STAR TREK: GENERATIONS, the Next Generation crew really get a film all to themselves, with TNG's main villains along for the ride. The movie opens with a spectacular space battle between the Federation and the Borg (one of the best overall Star Trek movie moments). The Borg then go back in time (more time travel!) to stop the Federation from forming in the first place. The Enterprise-D of course goes after them...Captain Picard (Patrick Stewart) was once turned into a Borg, and his quest for vengeance against them is a major plot point.
TNG star Jonathan Frakes directed FIRST CONTACT, and he's certainly no William Shatner when it comes to helming a Star Trek feature. This is all a TNG fan could have wished for--the Borg, an action filled story, and a new and interesting character in the Borg Queen (Alice Krige). There's even a nice cameo by Dwight Schultz as fan favorite Lt. Barclay. The story also brings in sub-plots about the creator of warp drive Zefram Cochrane (introduced in ST:TOS; here played by James Cromwell) and the first meeting between citizens of Earth and an alien race (the Vulcans, of course). Cromwell plays Cochrane a shade too broadly; he's set up here as a drunken comic relief.
Everything clicked in FIRST CONTACT....even the time travel aspect doesn't come off too bad (I still feel that this was kind of "borrowed" from STAR TREK IV). The question is....why didn't the other TNG movies work as well?

The very first TNG film is burdened by having to carry along the remnants of the original series. The movie doesn't even open with the Next Generation cast...it begins with Kirk, Chekov, and Scotty seeing off a new Enterprise. The new ship's maiden voyage is interrupted by a "ribbon" of space energy which supposedly kills Kirk. This "ribbon" is the Nexus, a energy field which gives whoever resides in it the ability to live in their own version of paradise.
Apparently Paramount wasn't that confident that a TNG movie would be that successful, so they stuck Kirk into the GENERATIONS screenplay. The idea of Captain Picard and Captain Kirk meeting face to face is cool one on the surface....but on the big screen it wound up being anti-climactic. Kirk's death falls kind of flat; and it also takes away from the main story at hand.
The thing that brings Picard and Spock together is the Nexus, and it's also the thing that makes the story somewhat confusing. The Nexus creates wanton destruction....yet if a being is able to be trapped in the Nexus, that being can spend eternity in a dream-like state. When Picard enters the Nexus, he experiences what his life would have been if he had married and raised a family. Naturally Picard is able to break free from the control of the Nexus (only Starfleet officers seem to have the ability to reject paradise when it is handed to them) and break Kirk out of it as well.
Picard uses the Nexus to go back in time (again!) and stop bad guy Dr. Soran (Malcolm McDowell) from his scheme to control the energy field for himself. Picard (with sacrificial help from Kirk) succeeds, but this begs the question.....how do we know that Picard isn't still in the Nexus, and his victory is just what his mind wants to believe?
One would assume that Malcolm McDowell would make a fantastic Star Trek antagonist, but Dr. Soran falls short of the Khan level. A sub-plot has Data getting a chip that makes him act "human". This gives Brent Spiner a chance to shine, but it doesn't really lead anywhere.
The main highlight of GENERATIONS is the Enterprise-D's saucer section separating from the rest of the ship and crash landing on a planet. The special effects for this are spectacular, and just about every Trekkie has long dreamed of seeing a "saucer separation scene".
As a big ST:TOS fan, I have to admit that GENERATIONS would have been a lot better off if Captain Kirk did not appear in it. The Nexus is a unique angle, but a hard one to understand.

This is the movie where Captain Picard tries to act like Captain Kirk. Starfleet has come across a planet inhabited by a race called the Ba'ku. Because of the special radiation surrounding the Ba'ku planet, the people are basically immortal. Starfleet (and a race known as the Son'a) wants to develop this planet for it's own purposes; Picard wants to protect the Ba'ku from being exploited, and he's willing to disobey Starfleet to do it.
Just like Kirk, Picard violates the Prime Directive (has anybody in the entire history of Star Trek actually FOLLOWED the Prime Directive?), goes against his superiors, and even gets to have a romance. The dramatics of Picard's "insurrection" are lessened by the fact that the Ba'ku are gentle, beautiful people who are kind of like space hippies, while the Son'a are mean and ugly. If the Ba'ku were the ugly ones, then maybe Picard's actions would have carried more weight. But the script makes it way too easy to support Picard's rebellion, especially when it gives him an attraction with a Ba'ku woman (Donna Murphy).
Near the end of the film it is revealed that the Ba'ku and the Son'a are the same race, but it comes too late to add any depth to the situation. The theme of a "paradise planet" is one that has been used in the Star Trek Universe several times. If you are a major Trek fan, you've been down this road before (major characters going down to the planet and starting to "change" or said characters acting "youthful"). It's disappointing, especially after FIRST CONTACT, that Producer Rick Berman and Co. would go down such a well-traveled road.
The supporting cast includes F. Murray Abraham as the leader of the Son'a, and the wonderful character actor Anthony Zerbe as a Starfleet Admiral.
INSURRECTION is capably directed by Jonathan Frakes, and it's mildly diverting....but if you want Captain Picard to be a bad-ass, then you should really let him be one.

The farewell for the Next Generation crew worked a bit too well; it almost killed off the Star Trek movie franchise. NEMESIS features the Romulans, a Star Trek race never really dealt with in the film series. Trek fans love the Romulans, and there was a huge buzz about them finally making it to the big screen. Unfortunately, they're wasted. The main villain is a clone of Picard named Shinzon (a very young and very skinny Tom Hardy) who has somehow taken over the Romulan Empire. How a clone of a Starfleet officer became the leader of a xenophobic race like the Romulans is never explained--heck, there's a lot of things in this movie that don't get explained.
Journeyman Stuart Baird was called on to helm this entry, even though he had no experience with the Star Trek Universe whatsoever. It shows in the final product. NEMESIS is also the darkest-looking and murkiest of all the Trek films--maybe this was supposed to be atmospheric, but it just makes everything look ugly.
We get introduced to a earlier (and not as intelligent) version of Data. The new android is a setup for Data's eventual fate...a fate which happens to be a rip-off of Spock's in WRATH OF KHAN. (I guess if you wind up running out of ideas, you can always steal from your own history.) The Romulans are a intriguing race, filled with possibilities...but instead of the script actually dealing with them, we get a guy doing a Patrick Stewart imitation.
Where NEMESIS really fails is in being a true send-off for Picard's crew. A large number of scenes, mostly "character moments", were cut out of the film. These are the things that true TNG fans wanted to see in the first place. A prime example is the wedding of Riker and Troi. What is one of the most important events in TNG becomes almost a throwaway. Poor Wesley Crusher (Wil Weaton) got the shaft entirely. Here's there at the wedding banquet, sitting at the end of the table--you just have to look real hard for him. There are a number of cut scenes on the NEMESIS special edition DVD, and these are more interesting than what made it into the final film. Telling TNG fans that NEMESIS is the big send-off and then denying the fans the chance to see the characters have some final nice moments was not very smart. Paramount needs to one day release a special cut of NEMESIS...but that probably won't happen.
And one more thing. Somebody at Paramount decided to release NEMESIS at the same time as a Harry Potter film, a James Bond film, and a Lord of the Rings film. The result? To this date, NEMESIS has made less money than any other Star Trek feature.

The Next Generation films were produced (Rick Berman) and written (Brannon Braga, Ronald Moore, etc.) by veterans of the TV series. Despite that, all the features (with the exception of FIRST CONTACT) are just about average. In all honesty, after FIRST CONTACT, I could have ranked the rest of them in a number of ways...it really wouldn't have made much difference.

J. J. Abrams' re-boot (or whatever you want to call it) goes along pretty well for the first half-hour or so, and then Vulcan gets blown up....and forty years of Star Trek history get wiped away so Abrams can appear to be "edgy". Chris Pine's Kirk is so arrogant and cocky that the William Shatner Kirk would have punched him in the face. You wouldn't want Pine walking your dog, let alone commanding a starship. The "new" Spock and McCoy are okay....but Uhura acts like a upscale supermodel, and Scotty is portrayed as a Highland redneck. As for Sulu and Chekov, they're just....there.
Leonard Nimoy gets an extended cameo in an obvious effort to make this movie an "official" Star Trek story. But if anything, Nimoy's presence just underscores how lacking the new Trek really is.  But hey, this movie made a lot of money, and the kids love it....so what do I know?