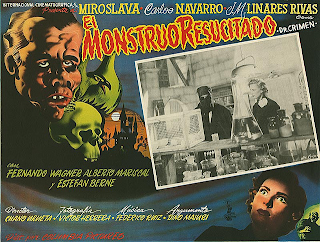 One of the great things about being a film buff is that you are always making discoveries. No one can watch EVERY movie ever made (unless you're independently wealthy and you've got nothing else better to do). I've seen plenty of old monster movies, but there's still a few I haven't gotten to yet.

One of the websites I visit regularly is Glenn Erickson's DVD SAVANT. Recently he reviewed a DVD of a Mexican horror thriller titled MONSTER. I was so intrigued by his description of the movie that I went to Amazon and ordered it myself. (A prime example of why I'm not rich.)

MONSTER is actually a 1953 Mexican film originally titled EL MONSTRUO RESUCITADO. The story centers on a Dr. Herrmann Ling, a disfigured plastic surgeon who is so desperate for companionship that he places a mysterious ad in the local newspaper. A beautiful journalist, Nora, is encouraged to answer the ad by her editor (who thinks there might be an interesting story behind it). Nora is taken by Dr. Ling to his seaside castle, where he reveals his feelings of loneliness and self-disgust. He also reveals his hideous face. Nora plays upon the Doctor's torment, hoping to write a series of articles on him. But when the Dr. Ling finds out that Nora is using him, he plots a hideous revenge.

This movie has just about everything for the classic horror film fan. There's a mad scientist who wears a black cloak and a wide brimmed hat, and hides his face with wrappings and dark glasses. He lives in a creepy castle next to a graveyard (of course), and he even has a half-witted servant. He has a full laboratory in his basement (where else would it be?) and he even keeps a half-man/half-ape creature in a cage. And...Dr. Ling makes bizarre-looking female wax statues.

The monster makeup for Dr. Ling isn't all that impressive (it certainly isn't on the Jack Pierce level). It looks as if the Doctor has a bad case of acromegaly. The makeup does have a passing resemblance to Lon Chaney's Phantom, especially when the Doctor is wearing his cloak and hat. The Doctor's emotional pain also resembles most of Chaney's characters. At one point in the film Nora, out of pity, kisses Ling on the forehead and the man is so overcome with joy he starts ranting and raving. In a way the viewer kind of feels sorry for Dr. Ling--Nora is basically planning to use him to get a sensational story. (I say...never trust the media.)

Ling's plan of revenge involves his reviving a recently deceased handsome man, turning him into a zombie, and having him go after Nora. That's a lot of trouble to go to, considering there's a number of times in the film where the Doctor could just go ahead and kill Nora by himself. Like most Mexican monster movies, there are enough plot holes to drive a truck through. For example...nobody seems to bother to go up to the castle and see what's going on until the very end of the movie. But for all that, the movie is certainly entertaining, especially for classic monster movie fans. It has a nice B & W atmosphere, and it has just about every horror film cliche in the book--but there's also a off-kilter aspect to everything that makes the movie seem familiar and brand new at the same time.

One would automatically think that MONSTER was influenced by the Universal thrillers of the 1930s...but the movie reminds me of the cheap 1940s horror films made by Monogram and PRC. If this story had been made in America, the role of Dr. Ling would have been perfect for someone like Bela Lugosi or Lionel Atwill.

The MONSTER DVD was released by a company called One 7 Movies. The disc is region free, and runs 80 minutes. The print appears to be from Italy--the main credits are Italian, and the actual title on the film is IL MONSTRUOSO DOTTOR CRIMEN. The film is in Spanish, with removable English subtitles. Because this was made in 1953, it is in black & white and full frame. The picture quality is not great, but it's serviceable.
One bit of trivia: the director, Chano Urueta, later had a role in THE WILD BUNCH as a Mexican village elder.

If you are a classic horror film fan and you think you've seen everything, chances are you haven't come across EL MONSTRUO RESUCITADO. I would recommend it as a rare piece of Gothic cinema. Just remember, if you plan to buy it look for the DVD title MONSTER.