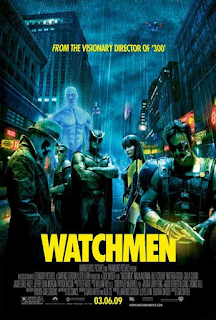 The Comic Book/Superhero film has now become the leading big-budget spectacular of choice for the 21st Century entertainment industry. It wasn't that long ago that the idea of spending a huge amount of money and hiring A-list talent to make a movie based on a comic book would have been considered absurd. Now, it's all too common.

There have been so many superhero movies made recently that they are all starting to run together. It's getting to the point where if you've seen one, you've seen 'em all. But with all the money that IRON MAN 3 is raking in, this genre is going to keep on going for a while. There's literally hundreds of costumed characters that haven't even been touched yet by either movies or TV.

A movie based on a comic book (or graphic novel, if you prefer) doesn't have to have a superhero in it. Just look at films like GHOST WORLD, 300, or THE ROAD TO PERDITION. Some comic book writers like Frank Miller and Alan Moore create work far more interesting, and far more entertaining, than the average Hollywood screenwriter. The film industry loves adapting comic books because it's the ultimate in high concept, but for the most part they fall far short in properly dramatizing the comic world.

Batman is my favorite superhero, and this is the best Batman movie, so it gets the top spot. Christopher Nolan saved the Batman movie franchise (and made Warners a crapload of money) by taking a "real" look at the classic character. It does have to be said that Nolan was obviously influenced by Frank Miller's seminal BATMAN: YEAR ONE. Liam Neeson steals the film, and Gary Oldman is perfect as Lt. (future Commissioner) Gordon. The only downbeat note: Christian Bale's uninspiring portrayal of the Caped Crusader.

This was made so long ago, it's kind of been forgotten. But it was the first major big-budget movie to be based on a superhero, and it's still an influence on comic book movies today. The scene where Glenn Ford as Pa Kent explains to young Clark how great power comes with great responsibility has been reworked in just about every superhero movie ever since. The scene may have been copied, but it's never been topped. The first part of the movie, featuring Krypton and Clark Kent's youth, is absolutely sublime--Krypton is eerie, fascinating, and chilling (the Forbidden Zone scared me as a kid), and the young Clark sequence has an almost John Ford-like feel.
The reason this movie doesn't get the top spot is the second half, where the dopey comedy kicks in. This change in tone caused director Richard Donner to quit before SUPERMAN II was finished. Overall, though, the first major superhero film is far better than most of it's modern counterparts.

It's amazing that Zach Snyder's film of Alan Moore & Dave Gibbons' acclaimed comics series even got made. WATCHMEN is not mainstream movie material--it's dark, realistically (as opposed to movie) violent, and if you haven't read the source material, it's almost impossible to follow. Nevertheless, it did get made--and for all those people who complain about writers & directors changing things, it follows the original about 99% of the time. (And what happened? Critics complained that the film was too close of an adaptation!)
This is not a movie for everyone, especially kids. WATCHMEN didn't do the kind of box office most superhero flicks do, and many consider it a bomb--but it's one of the best visualizations of a legendary comic book ever made.

This movie is really the beginning of the 21st Century Comic Book Film Era. If it hadn't been successful, there might not have been any other big-budget Marvel adaptations. Bryan Singer makes an exciting, realistic, and accessible story--not a mean feat considering all the X-Men history he had to deal with. The X-Men are mutants, and Singer equates mutation with being an outsider, making the audience relate to the core cast. Singer was helped by a number of fine actors such as Patrick Stewart and Ian McKellen. But it's Hugh Jackman, in a breakout performance, who makes the biggest impression as fan favorite Wolverine. One of the most important of all the comic book films.

This is based on an Italian Fumetti (comic book) on a master thief named Diabolik. (And please don't tell me that it "shouldn't count".) Cult director Mario Bava makes one of the ultimate cult films. It's filled with more wild action and inventive style than a dozen major Hollywood productions combined. John Phillip Law plays the mysterious Diabolik (nothing in this movie is explained--Diabolik doesn't even have a backstory) and Marisa Mell is his super-hot girlfriend. DIABOLIK also features a fantastic score by Ennio Morricone. This is one of those 1960s films that Video Watchdog editor Tim Lucas has referred to as "Continental Op". How cool is this movie? The Beastie Boys' "Body Movin" video is an homage to it. 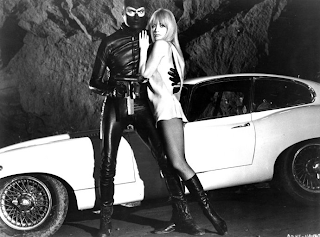