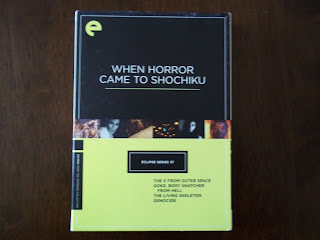 My journey through the Criterion Eclipse WHEN HORROR CAME TO SHOCHIKU box set is now complete. THE LIVING SKELETON (1968) is a prime example of a Japanese kaidan, and a surprising departure from the other films in this collection.

A freighter carrying gold bullion is ransacked by pirates, and crew members & passengers are machine-gunned down. Three years later, the twin sister of one of the ship's victims begins acting strangely, setting into motion a revenge planned seemingly from beyond the grave.

What makes THE LIVING SKELETON the odd movie out in the Shochiku set is the fact that it is in black & white. The exquisite cinematography enhances the film's eerie tone with a number of memorable images. Adding to the tone is the story's languid pace, which picks up a bit toward the end.

THE LIVING SKELETON foreshadows the 21st Century Asian horror film by the use of a female "ghost" with long black hair and a fair amount of rain and water. But it also throws in some Western elements as well. One of the main characters is a Catholic priest, and several scenes are set in the priest's church. The various religious iconography harkens back to the Universal thrillers of the 1930s. This is, however, a story set in contemporary times, and the juxtaposition between the modern world and the creepy coastal settings contributes to the film's mood. One of the "revenge" killings is actually a take-off on the PSYCHO shower scene.

In the second half of SKELETON there are a couple plot twists that even the most experienced film geek will not have seen coming. It's in the climax that the ultra-weirdness of the other Shochiku horror films makes an appearance. The story almost becomes a tribute to the Bela Lugosi-Mad Scientist B pictures of the 1940s. When the "ghost" freighter starts melting due to a secret formula, you know you're not watching a typical horror tale.

I've been a little bit vague on plot details because I really think those inclined should view this picture, and discover it's crazy charms for themselves. THE LIVING SKELETON is a ghost story beyond any type of comparison.

Now that I've seen all the movies included in this set...is it worth buying?

Well, remember that I didn't buy this set (I got it for free). Any Criterion product is not cheap, and I probably wouldn't have bought this set on my own because I had never honestly heard of any of the films featured in it.

But having seen the films involved, I do have to say that it is worth buying....for a certain type of audience. If you don't like films with subtitles, or films where you have to use your imagination, stay away. But if you are someone who loves classic horror and science-fiction, and has seen just about every example of those genres known to man, this set is for you. I also think that this set would make a great gift for someone who fits the description in the last sentence. I'm fairly sure that not many film buffs out there have seen these movies, or at least seen them uncut and in widescreen. I enjoyed WHEN HORROR CAME TO SHOCHIKU because it enabled me to discover a group of titles I had no knowledge of. These days, that's about all a film buff can hope for when it comes to modern home video.