THEY DARE NOT LOVE 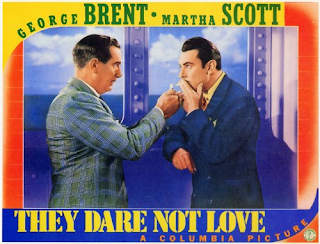 I happen to be a member of the Peter Cushing Association on Facebook, and not too long ago I won a contest run by PCA head Christopher Gullo. (By the way, I highly recommend joining this august organization.) One of the prizes was a DVD-R of the 1941 Columbia film THEY DARE NOT LOVE, which features Peter Cushing in a very small role. But what's more interesting is that this movie is the last feature film directed by James Whale, known for his work at Universal in the early 1930s. Whale has gained more renown in recent years due to his being portrayed by Ian McKellen in the biopic GODS & MONSTERS.


THEY DARE NOT LOVE is a WWII suspense melodrama--or I should say it tries to be one. It's not very suspenseful or dramatic. The story concerns an Austrian Prince (George Brent) who flees his country after the Nazis take over. Before he leaves the Prince swears he will do whatever he can to help out his homeland--but his "escape' consists of taking passage on a luxury cruise ship to America. While on board the Prince romances another Austrian emigre, Marta (Martha Scott). The Prince spends most of his time in the U.S. living the life of a playboy, until Marta's father shames him into deciding to trade himself for seven Austrians incarcerated in concentration camps.

George Brent is best remembered for the many movies in which he co-starred with Bette Davis. He was the leading man in a number of soap-opera type films of the 1930s, and he shared the screen with just about every famous actress of that period, including Barbara Stanwyck, Ginger Rogers, Greta Garbo, Ann Sheridan, Ruth Chatterton, and many others. Brent's real job was to make his leading ladies look good--he certainly wasn't in the class of Clark Gable. His portrayal of the Prince is a bit stiff and underwhelming....just like most of his other roles. It doesn't help that it's hard for the audience to get all that involved in the Prince's fate. He's the type of guy who puts on a ceremonial uniform before fleeing his own country. We are told that the Prince is an Austrian legend, and the Nazis fear his return because he might incite his countrymen to rebel....but the guy spends most of his time wearing fancy clothes and partying. Another actor might have brought something to the role, some sort of hidden resolve. It's not a very well written part (how can the average viewer root for a undynamic aristocrat?), but Brent's lackluster playing of it does not help matters.

Brent goes to Gestapo agent von Helsing (catch that name, Peter Cushing fans?) to effect his transfer for the Austrian prisoners. This great plan shows that the Prince isn't the smartest guy in the world--did he really believe that he could make a deal with Nazi Germany?? The Gestapo agree to send the Prince on a boat to neutral Belgium. Right before the boat sails, the crew is replaced by Germans, Marta scampers on board to stop the Prince, and the Austrian couple learn that the boat's real destination is Hamburg.

The Prince and Marta are saved not by any slam-bang heroics from the leading man, but by a last-minute plot contrivance. One suspects that the Prince will go on to continue his high-class life.

When one first glances at the credits of THEY DARE NOT LOVE, one expects a far better picture than the end result. Among the credited writers are Charles Bennett, who worked on a number of Alfred Hitchcock's "British Period" suspense thrillers of the 1930s, and James Edward Grant, who had a long association with John Wayne. Despite the involvement of these men, THEY DARE NOT LOVE is rather slow-moving at even a short 76-minute running time. Most of the scenes are of dialogue exhanges, and they are filmed about as generically as possible.

Other members of the cast include Paul Lukas, who gives the best performance in the film as Gestapo agent von Helsing. (One wishes he had played the role of the Prince.) Frank Reicher plays the German ship captain, and it's a very different role from the ship's captain the actor portrayed in KING KONG. There's also a very, very young Lloyd Bridges as a German sailor.

And as for Peter Cushing....he appears at the very end, in a very small role as a Royal Navy Officer. It's one of the few times Cushing would be able to serve his country on-screen.

Even though the title credits show James Whale as the sole director of THEY DARE NOT LOVE, several sources list Charles Vidor, and even Victor Fleming, as having a hand in the film. Apparently Whale was replaced during shooting, and how much of the film was under his stewardship is unclear. As mentioned before, the movie is shot in a very ordinary manner--it's professionally done, and it's certainly not terrible, but it lacks a certain style to make it more than merely competent. THEY DARE NOT LOVE lacks Whale's quirky flourishes, and it's missing his eccentric sense of humor. There is one scene that has the mark of James Whale--it's the aforementioned part where the Prince makes his vow to serve Austria. The scene takes place at the burial of the Prince's chauffeur, and it features a large slanted crucifix...one that almost exactly resembles the crucifix hanging on the wall inside the blind hermit's home in BRIDE OF FRANKENSTEIN.

I don't know what exactly happened to James Whale during the filming of THEY DARE NOT LOVE, but I suspect that the acerbic director was so bored with the script he contrived to get himself taken off the picture. Back in his glory days as "The Ace of Universal", Whale usually had control of the projects he worked on. After the Laemmle family sold their share of the company Whale was no longer top dog, and he drifted from film to film, being increasingly harder and harder to deal with. THEY DARE NOT LOVE was probably the final straw, and after it Whale retired, never to make another major studio film again.

It's too bad that THEY DARE NOT LOVE was the swan song for one of movie history's most talented and unique directors. The movie is of interest as a curiosity piece, but it doesn't really warrant multiple viewings.