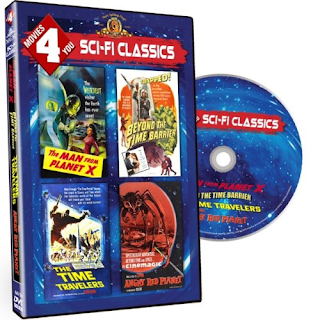 I recently bought this DVD from Amazon for $5. It contains four different low-budget science-fiction films from the 1950s and 60s. Calling them "Sci-Fi Classics" is a very big stretch....there's certainly no FORBIDDEN PLANET or DESTINATION MOON here. However, each film does have various items of interest.

Let's take a look at the four movies:

THE MAN FROM PLANET X (1951)
This movie is one of the very first "Alien from another planet visits Earth" stories, along with the original THE THING and THE DAY THE EARTH STOOD STILL. But this entry is a very poor cousin to those other features. A reporter travels to Scotland to cover the story of a newly discovered planet. Soon, a resident of Planet "X" lands nearby. The alien attempts to communicate, but humans, as usual, screw things up.
This movie was directed by cult film maker Edgar G. Ulmer (1934's THE BLACK CAT, BLUEBEARD, DETOUR). Ulmer uses the Scottish setting as an excuse to pump in tons of fog, and he even throws in a spooky castle, where most of the story takes place. This Gothic atmosphere gives PLANET X an extra advantage compared to most movies of it's type (the cinematographer for PLANET X was John L. Russell, who would later work for Alfred Hitchcock on his TV show and PSYCHO). Unfortunately, the pace is as brooding as the atmosphere, and the story moves really slow, even at only 70 minutes. At least the design of the alien and it's spaceship is intriguing.
The cast includes Margaret Field, who was the mother of Sally Field, and William Schallert, well-remembered by Baby Boomers for his many TV and movie appearances.

BEYOND THE TIME BARRIER (1959)
Leading man Robert Clarke (who also was the lead in THE MAN FROM PLANET X) produced this film on a (very) shoestring budget. He hired his PLANET X director Edgar Ulmer to helm this tale of a U.S. Air Force test pilot who breaks the time barrier instead of the sound barrier. He lands in the year 2024, and finds out that Earth has suffered from a world-wide plague. He finds the typical movie post-apocalyptic set-up--normal looking people banding together against bald, vicious mutants. The normals live underground in a fortress-like place called a "citadel", where most of the women wear short skirts and black stockings. (In most science-fiction movies of the 50s and the 60s, no matter what the circumstances, the women almost always have nice legs.) There's more talk than action in this movie, until the mutants are let loose and battle the normals during the climax. The Air Force major does get back to his own time, but his ultimate fate is a surprising revelation.
Of interest here is the involvement of legendary makeup artist Jack Pierce. Pierce of course is known for all the great monster makeups for the Universal horror films of the 30s and 40s. What Pierce actually did on this project is a bit unclear--hopefully he wasn't in charge of the mutants, because they all are wearing some rather ill-fitting and obvious bald caps.
BEYOND THE TIME BARRIER has a few decent moments--such as when Robert Clarke lands in the future and finds his air base is now a deserted wreck. But other than the Twilight Zone-type ending, this movie has very little to distinguish it from the dozens of sci-fi features made around the same time. Edgar Ulmer has a huge reputation, but I've found his films to not be as brilliant as critics make them out to be.

THE TIME TRAVELERS (1964)
This movie is the best in the collection. A group of scientists create a "time portal" and wind up 107 years in the future, where (guess what?) the remnants of normal civilization live in caves and fight off bald-headed vicious mutants. This one's in color, and it was photographed by famed cinematographer Vilmos Zsigmond. What makes this one special is the various interesting and unique special effects incorporated in the story. There's an android factory, which is highlight, and there's also a very nice miniature rocketship and launchpad. The movie looks bigger than the budget. And it has a wildly fantastic ending.
The cast includes old timers Preston Foster and John Hoyt, and there's a cameo by the original fanboy, Forrest J. Ackerman. THE TIME TRAVELERS was directed by Ib Melchoir, who had a hand in a number of sci-fi features during this period.

THE ANGRY RED PLANET (1960)
This one deals with a mission to Mars that goes totally berserk. The problem is....the movie is about 36 minutes old before anyone even steps on Mars' surface. (I sure that kids watching this movie in a theater back in 1960 were squirming in their seats, waiting for something to happen.) The Martian sequences are highlighted by a FX process called "Cinemagic", which involves a deep red tinting and some very effective Martian creatures. If most of the movie had been presented in Cinemagic, it may have been a lot better (although the red tinting might have drove a number of people crazy). The story suggests that the entire planet is rising up against the Earthlings, a good idea which isn't really developed properly. Ib Melchoir directed this one (his story for the later JOURNEY TO THE SEVENTH PLANET also contains a world vs. astronauts plot). The co-producer, and creator of Cinemagic, was Norman Maurer....Moe Howard's son-in-law!


All four films are on one disc. I did not have any playback problems, and the visual quality is okay, but it would have been a lot better if each movie had it's own disc (but then, it wouldn't have cost $5).
There are no trailers, and the only extra is a 5 minute photo gallery, which contains stills and posters from all four films. It's a nice bonus to have on here, but I wish there had been some captions to go along with it. I did some internet research, and as far as I can tell, each film is uncut and seems to have the proper running time and aspect ratio. I say "seems" because with low-budget films of this kind you can never be 100% sure about such things. As an old monster movie aficionado and collector, this DVD is a steal considering the price I paid for it. But I certainly wouldn't call these titles "Sci-Fi Classics".