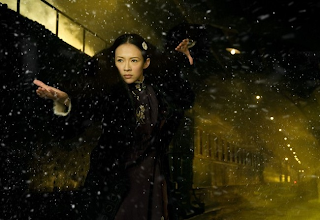 Yesterday I went and saw THE GRANDMASTER, a Chinese film produced, written, and directed by the acclaimed Wong Kar-wai. I became interested in this picture after seeing some trailers, and learning that it starred Zhang Ziyi, an actress I've followed since first seeing her in CROUCHING TIGER, HIDDEN DRAGON.

THE GRANDMASTER features Tony Leung as famed martial arts master Ip Man. Ip Man was a real historical figure (he's best known for training Bruce Lee), and a number of other kung fu films have been made about his life. In THE GRANDMASTER Ip Man is used more as a symbol than as a real human being. This is not a typical screen biography--the story highlights various incidents involving Ip Man, but the viewer won't really know that much more about Ip Man than they will when they came in the theater.

This is a movie where style, mood, and atmosphere are more important than a conventional storyline. There's very little dialogue (the movie is subtitled in English), and when characters do speak it's mostly in metaphors.

There are plenty of fight scenes--but the scenes are more like ballets than hard-hitting battles. Despite all the kung fu there's very little blood. Wong Kar-wai wasn't trying to make a violent action thriller....and that's going to disappoint some people. In the U. S. this movie is being marketed as a martial arts epic. Action fans are going to go to this film and be angry that it's more like an art film, and arthouse fans are going to go and be mad that there's a bunch of fight sequences. THE GRANDMASTER falls somewhere in between an art film and a kung fu story, and because of this probably won't get a lot of attention in America.

There are a number of exquisite visuals here, courtesy of cinematographer Philippe Le Sourd. The editing is excellent as well, and the fight scenes are handled by legendary stunt coordinator Yuen Woo-ping. THE GRANDMASTER has more technique than humanity. Tony Leung and Zhang Ziyi both give fine performances, but in the end you still don't feel you know much about their characters.

The version of THE GRANDMASTER being shown in the U. S. right now is a shorter version than the original cut--which means that Americans are seeing an "incomplete" film. What I've just written pertains to the American cut--for all I know, the "complete" version could be a totally different film. I guess I'll never really know until the original version comes out on home video someday.

Is THE GRANDMASTER worth going to the cinema to see? If you enjoy watching movies that are out of the norm, and are used to a foreign style of storytelling, you may enjoy THE GRANDMASTER. No matter what, it is a beautifully made film. But if you are expecting something like RUSH HOUR 2, you'd better stay home. This is not a picture for those only used to ordinary American movie making.