The Vincent Price Collection On Blu-ray 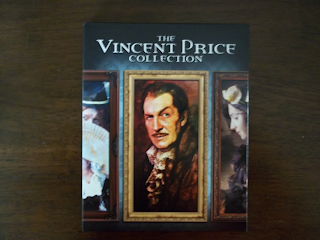 I usually don't write a blog on a DVD or Blu-ray set until I've seen every one of the extras and listened to all the commentaries, but The Vincent Price Collection from Shout Factory is so filled with various goodies that it would be a long time before I got a chance to tell you about it. So I've decided to take the opportunity to go ahead and tell you how great it is.

The set includes six films starring Vincent Price: THE PIT AND THE PENDULUM, THE MASQUE OF THE RED DEATH, THE HAUNTED PALACE, THE FALL OF THE HOUSE OF USHER, THE ABOMINABLE DR. PHIBES, and WITCHFINDER GENERAL (also known as THE CONQUEROR WORM). I have watched all the Blu-rays of these movies, and they look spectacular, especially THE MASQUE OF THE RED DEATH and THE PIT AND THE PENDULUM. I do have to admit that THE HAUNTED PALACE looks a tad bit too dark.

All of these titles had already been released on DVD as part of the legendary "Midnite Movies" collection. Shout Factory was smart enough to include the extras on the original DVDs as part of this Blu-ray set. But there's a ton of new extra features as well. For those who own all these films on DVD, the increased picture & sound quality and the new added extra features of the Blu-ray set should be more than enough for you to spring for an upgrade.

This truly is a "greatest hits" collection for Vincent Price. Most everyone will agree that these six films are among Price's best showcases (I believe that THE ABOMINABLE DR. PHIBES is Price's best performance ever). The six productions on this set are so esteemed that any fantastic film fan will want to purchase it, let alone Vincent Price admirers.

I have managed to watch some of the set's extras, such as the new interview with Vincent Price's daughter, Victoria. This runs about 45 minutes, and it gives a unique insight into what Price was really like away from the camera. (By the way, I highly recommend reading Victoria Price's biography of her father.) Another extra I viewed was David Del Valle's talk with Vincent Price for the "Sinister Image" show. This runs about 60 minutes, and it covers the length of Price's career in horror and fantastic films. I haven't delved into any of the new audio commentaries yet. The one I'm really looking forward to hearing is from director Robert Fuest for THE ABOMINABLE DR. PHIBES. Fuest recently passed away, and he had a reputation for being as unusual as the films he directed, so his commentary should be interesting.

Each movie gets an extensive still & poster gallery, and every film except THE ABOMINABLE DR. PHIBES has a special introduction from Vincent Price (these were taped for a Iowa PBS station in the 1980s). The Vincent Price Collection also includes a 24-page booklet with an essay by David Del Valle. The booklet contains photos from the movies in the set.

Here's a quick rundown of the four discs in the set:

THE FALL OF THE HOUSE OF USHER with audio commentary by Roger Corman, an audio interview with Vincent Price conducted by David Del Valle, and a commentary by Lucy Chase Williams

Shout Factory has released some outstanding home video products, and The Vincent Price Collection is a perfect example. It's definitely going to make my list as one of the best DVD/Blu-rays of 2013.