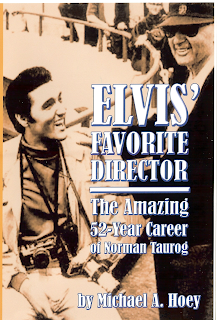 Author Michael A. Hoey happens to be the son of character actor Dennis Hoey, who is best known for portraying Inspector Lestrade in the Universal Pictures series of Sherlock Holmes films. Hoey's book on the Holmes series, SHERLOCK HOLMES & THE FABULOUS FACES, is a favorite of mine, and his new book covers the life of classic Hollywood film director Norman Taurog.

Norman Taurog may not be a famous name, even to most film buffs, but his resume certainly should be well known. Taurog won an Academy Award for Best Direction for the 1931 movie SKIPPY, starring his nephew by marriage, Jackie Cooper. He also directed Spencer Tracy in his Oscar-winning role as Father Flanagan in BOYS TOWN. It's easier to list who Taurog didn't work with instead of those he did. Among the stars who appeared under Taurog's direction: W. C. Fields, Bing Crosby, Carole Lombard, Robert Taylor, Mickey Rooney, Judy Garland, Deanna Durbin, Cary Grant, Dean Martin, Jerry Lewis, Fred Astaire, Eleanor Powell, and many, many others.

Because of Taurog's success with SKIPPY, he gained a reputation for dealing with younger actors and for light comedy. Hoey documents that Taurog could handle just about any assignment, and his reliability and professionalism enabled the director to earn a contract with MGM during the studio's height.

Of course any book with the title ELVIS' FAVORITE DIRECTOR is going to involve the King. Taurog directed more Elvis Presley films than anyone else (nine in all, including such favorites as G. I. BLUES and BLUE HAWAII). Hoey (who worked on a number of the Taurog-Elvis features) presents Elvis as shy, hardworking, and polite....maybe too polite when it came to his manager, Col. Tom Parker. Hoey voices the opinion that it was Parker who was responsible for the mediocre features Elvis starred in during the mid-1960s.

One of the nice things about ELVIS' FAVORITE DIRECTOR is that it is not a "tell-all" book...there's very little wild gossip. Hoey discusses the somewhat difficult temperaments of stars such as Mickey Rooney, Judy Garland, Jerry Lewis, and Mario Lanza, but only in the context of showing how patient Taurog was in dealing with them and still making sure the job got done.

Obviously the main selling point of ELVIS' FAVORITE DIRECTOR is.....Elvis Presley, but there's way more to the volume than that. Norman Taurog may not have been on the level of a John Ford or a Howard Hawks, but his long and varied Hollywood career should hold more than enough interest for any major film buff.