MADE FOR EACH OTHER 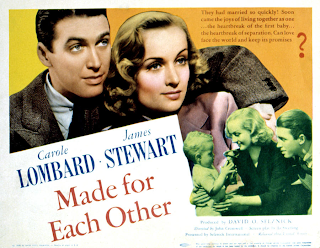 Are there any New Year's Eve movie traditions? There's dozens and dozens of Christmas movies....but there doesn't seem to be a clear-cut genre known as the "New Year's Eve film". When I was a kid I remember local stations showing Marx Brothers movies on New Year's Eve, and some channels still do. I don't know where the idea of having the Marx Brothers on during the night of 12/31 came from (if anyone out there knows, please leave a post in the comments section).

There are of course a lot of movies that have New Year's Eve scenes. And it always seems that whenever a movie has such a scene, it means that something bad is about to happen (POSEIDON ADVENTURE, anyone?). For some reason the coming of the new year is a portent of doom in the world of the cinema.

A perfect example of this is MADE FOR EACH OTHER (1939), produced by none other than David O. Selznick.

MADE FOR EACH OTHER is about the struggles of a young married couple, played by Carole Lombard and James Stewart. (The title sequence at the beginning of the film shows Lombard and Stewart signing their names on a wedding license, a nice touch.) Stewart plays John Mason, a young New York City lawyer who marries Jane (Lombard) after spending just one day with her. (If I had spent only one day with Carole Lombard, I'd have married her too.) The newlyweds have to deal with John's crusty boss (Charles Coburn), who doesn't give John a promotion, and John's overbearing mother (Lucile Watson), who winds up living with John & Jane in a small apartment. Jane has a baby boy, but soon John is distressed by all the bills coming in and his lack of success at the law firm.

I don't want to call MADE FOR EACH OTHER a "dramedy"--that's a 21st Century term and it really doesn't apply here. It attempts to be a slice-of-life melodrama. The real charm in watching this picture is seeing Carole Lombard and James Stewart. They work great together, and it's a shame they were never able to co-star in a real honest-to-goodness comedy.

So far MADE FOR EACH OTHER is a nice little story about an appealing married couple--but David O. Selznick didn't want to make nice little stories. As New Year's Eve approaches, the movie gets darker, and the script starts going off the rails.

On New Year's Eve John and Jane are all dressed up, but they have no place to go--John's rival co-worker promised to pick them up and take them to a party, but he doesn't show. Soon John, Jane, and John's mother start arguing (Jane finally tells her mom-in-law off, something the viewer has been wanting her to do for the whole movie). John angrily leaves, and Jane follows him. The couple wind up at a club, where during a raucous celebration John tells Jane he thinks the marriage has been a mistake. A sobbing Jane decides to call home to check on the baby--and she finds out the baby is terribly sick.

The baby has pneumonia--and only a special serum will cure him. Nobody in New York has any of the serum--it can only be found in Salt Lake, and it has to be flown in, but there's a major storm in that part of the country, and no pilot will take a chance on flying except for a lot of money, so John has to barge into his boss's house in the middle of the night, and beg him for help, and--you see how this movie is going? The nice little film has turned into a heavy-handed overwrought soap opera. But it gets even better--or worse.

A pilot finally does take up the offer to fly. He gets lost in the storm, and no one is able to make contact with him. I have to mention that while all of this is going on, William Cameron Menzies' production design gets more and more expressionistic--the Catholic hospital the baby is at resembles a haunted house instead of a place of healing. Jane goes into the hospital chapel to pray for her baby's life, in a scene that looks like it comes from a John Ford movie.

Just after Jane's prayer, the skies clear...but the pilot starts having engine trouble, and he has to bail out. When he hits the ground, he's knocked unconscious...but he soon wakes up and, although injured, crawls to a nearby farmhouse where the farmer phones the hospital.

The baby is saved....but after so much melodramatics I can't say the same for the movie. I don't know this for sure, but I suspect the memo-writing hand of David O. Selznick himself was involved in "improving" the third act of the story. Selznick always wanted something big, and MADE FOR EACH OTHER certainly ends in a big way.

The late 1930s was the period when Carole Lombard appeared in a number of films which were designed to show that she was more than just a "screwball girl". She handles the dramatics in MADE FOR EACH OTHER very well....but she didn't need the movie's contrived climax to prove she was an excellent actress. James Stewart is typically James Stewart....but his character is a bit too much of a nice guy, and Stewart doesn't really get the chance to use his nervous energy and take matters into his own hands.

MADE FOR EACH OTHER was not a box office hit, and it is not regarded as a great film by either Carole Lombard or Jimmy Stewart fans. It is well directed by James Cromwell, and of course being a Selznick picture it is well produced (maybe too well produced, considering that it's supposed to be about a struggling young married couple). The wild ending of MADE FOR EACH OTHER keeps it from being known as a classic. By the way, if you do want to purchase this movie on DVD, stay away from all the cheap public domain copies on the market. MGM home video has a version on DVD which has excellent picture and sound quality, and you can easily find it online.

As for New Year's Eve....that's a date where you don't want to be a movie character.