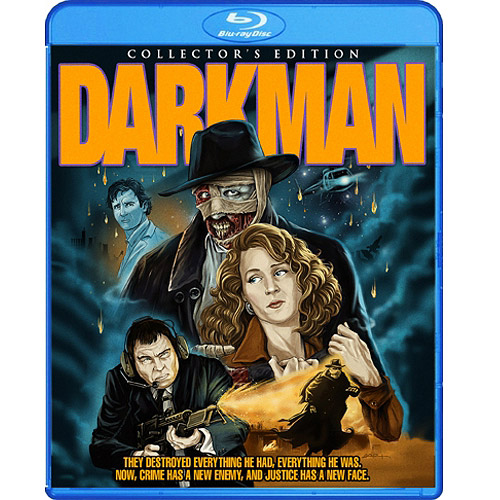 Shout Factory has come out with another collector's edition Blu-ray of a 80s/90s cult genre film. This time it's Sam Raimi's DARKMAN (1990). The film was writer/director Raimi's first major studio project, and it is still more entertaining than Raimi's more "important" recent work.

Made between EVIL DEAD 2 and ARMY OF DARKNESS, DARKMAN was created by Raimi to serve as the basis of a comic book/superhero story. A brilliant scientist (Liam Neeson) is savagely attacked and left for dead by gangsters. The scientist survives, but in a horribly disfigured state. He uses his research into producing artificial skin to enable him to become just about anyone he wants, and getting revenge on his enemies.

DARKMAN is more of a dark revenge fable instead of a straight comic-book story. The Darkman isn't interested in fighting crime--he's just trying to get back at those who ruined his life. There's a lot of horror/noir elements in this film, mixed in with Raimi's love for goofy slapstick humor and grotesque cartoonish violence. The result is a very unique movie, made even more so by the leads being played by Liam Neeson and Frances McDormand (not exactly the type of actors you would expect in a story such as this).

The Shout Factory Blu-ray of DARKMAN has a lot of extras, including new interviews with actors Liam Neeson, Frances McDormand, Larry Drake, Dan Bell, and Danny Hicks. The talk with Liam Neeson isn't very long (only about 7 minutes), but it's nice that Neeson looks back on the role fondly, and agreed to be on the Blu-ray. There's also features with production designer Randy Ser, art director Philip Dagort, and makeup artist Tony Gardner which go into the challenges of making the film (even though this was a major step up budget-wise for Sam Raimi, it still was not a very expensive picture).

The audio commentary features director of photography Bill Pope. DARKMAN was Pope's first film as a DOP (he would later work on THE MATRIX films and SPIDERMAN 2 & 3). Pope gives a lot of insight in what it was like working for Raimi, and the various non-CGI tricks used in the film.

The Blu-ray also includes interviews & material from when DARKMAN was first released. What the extras do not have is anything new from Sam Raimi himself--kind of surprising, considering that Raimi is usually all over the extras on the video releases of his other films.

Unfortunately the picture quality of this Blu-ray is somewhat disappointing. It's not terrible, but it isn't that much of an improvement over the look of the DARKMAN DVD. The 5.1 DTS sound mix is impressive, showcasing Danny Elfman's excellent music score.

As I have stated before, since DARKMAN Sam Raimi has gone on to make a lot of more famous pictures--but I still think his first major studio effort is more memorable.