THE HIDDEN FORTRESS From Criterion 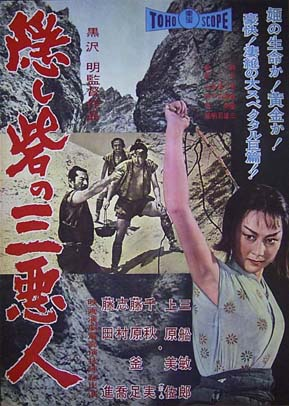 My latest Criterion Blu-ray features Akira Kurosawa's THE HIDDEN FORTRESS. I first saw this movie at the University of Notre Dame's Browning Cinema. THE HIDDEN FORTRESS is well-known among film buffs for being a major influence on George Lucas and STAR WARS, but my first reaction after seeing it was how much it reminded me of Sergio Leone's film work. (Remember that Leone's A FISTFUL OF DOLLARS is basically a Western remake of Kurosawa's YOJIMBO.) THE HIDDEN FORTRESS has a lot in common with Leone's THE GOOD, THE BAD, AND THE UGLY. Both movies involve a small group of characters who make an arduous journey through a countryside affected by civil war, with a fortune in gold at stake. Sergio Leone's widescreen visual style owes a lot to Kurosawa, and both directors were huge fans of John Ford. It's very easy to connect the dots from John Ford to Kurosawa to Leone to George Lucas.

The story begins with two bumbling peasants, Tahei and Matashichi, who get themselves stuck in a wartime adventure in 16th Century feudal Japan (much like C3PO and R2-D2 would get involved in intergalactic wartime adventure). The duo are tricked into helping a fugitive princess (Misa Uehara) by General Rokurota (Toshiro Mifune). The characters of the General and the proud and determined princess were obviously inspirations for George Lucas' Ob-Wan Kenobi and Leia Organa.

Mifune is his typical commanding self, and he makes a huge impression with a knock-out action sequence which shows him chasing foes on horseback and fighting a lance duel with another general. The duel certainly foreshadows the lightsaber battles in the STAR WARS saga, and is very reminiscent of Sergio Leone's various gunfights.

For my money it is Misa Uehara who steals the film. Her Princess Yuki is one of the great female roles of action-adventure cinema, and more proof that old movies didn't always treat women badly. (In my opinion, women had far more opportunities to prove their talent in classic films than they do today.)

THE HIDDEN FORTRESS was Akira Kurosawa's first widescreen film. It's hard to believe that fact after watching it--you would be sure that Kurosawa had been working in the widescreen format for years. Kurosawa and his cinematographer, Ichio Yamazaki, bring such a clarity, and such a depth of field to the scenes, that there are times you feel you are looking at a 3-D production.

Kurosawa and Yamazaki's work is enhanced by the stunning picture quality of Criterion's Blu-ray. Criterion has also included a 3.0 surround soundtrack presented in DTS-HD audio which replicates the original Perspectra sound track. The audio commentary is by Kurosawa expert Stephen Prince, and it is well worth listening to. The rest of the extras include a eight-minute interview with George Lucas about Kurosawa, and a 40-minute documentary on the making of THE HIDDEN FORTRESS for the series AKIRA KUROSAWA: IT IS WONDERFUL TO CREATE. There is also a booklet written by film scholar Catherine Russell. Like all new Criterion product now being released, a DVD of the film and all the extras is included.

My favorite film of all time is STAR WARS, and my second favorite film is THE GOOD, THE BAD, AND THE UGLY. So of course I would recommend THE HIDDEN FORTRESS. But don't buy this Blu-ray or watch this movie because you feel you have to as a film buff--watch it because it really is an entertaining, well-made film from one of the great cinema artists of all time.