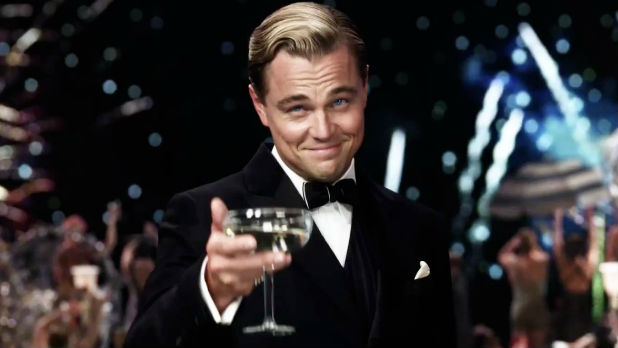 While watching THE WOLF OF WALL STREET, it struck me that Leonardo DiCaprio has now become the perfect example of the cinematic ugly American. Just think about the roles that he has played in the last decade: Howard Hughes, J. Edgar Hoover, the con artist of CATCH ME IF YOU CAN, an evil slave owner in DJANGO UNCHAINED, Jay Gatsby in THE GREAT GATSBY, and now a obnoxious financial swindler.

DiCaprio achieved breakout success after starring in James Cameron's TITANIC. One would assume after playing the lead role in one of the biggest blockbusters of all time, DiCaprio would wind up getting a number of typical leading man roles. But he hasn't, mainly due to his association with director Martin Scorsese. Despite playing a variety of notorious characters, DiCaprio is considered a major star, and he has been nominated for five Academy Awards.

If DiCaprio had wound up playing "normal" leading man roles, I don't think he would be anywhere near as big as he is now. The fact is that DiCaprio is best when he is being an absolute jerk on screen. There just something about Leo....he has a certain smugness about him, a snarky attitude. (Just look at the photo above--it sums up DiCaprio's screen persona to a T.) DiCaprio's babyface looks accentuate his on-screen villainy rather than detract from it. He always reminds me of the guys in high school who were good-looking and well-off and knew it.

Something else that makes Leo a great bad guy--his cinematic temper tantrums. When one of his characters goes off, they act worse than a three year-old. It's a different kind of anger than say, a De Niro or a Pacino would have.

Even when DiCaprio isn't really supposed to be a "bad guy", you still don't like him all that much. Let's take a look at THE GANGS OF NEW YORK and THE DEPARTED (which is almost a modern-day remake of GANGS). In both films DiCaprio is a lower-class punk who falls under the sway of, and eventually betrays, a charismatic, vicious crime boss (Daniel Day-Lewis and Jack Nicholson, respectively). In each case DiCaprio may nominally be the "hero", but you still wind up not being all that sympathetic toward him. He comes off as a underhanded rat.

Does anyone remember the 1998 version of THE MAN IN THE IRON MASK? In that movie DiCaprio played dual roles--twins--and as the evil twin he came off way, way better than when he was the good twin.

After TITANIC came out there was a huge backlash toward the film and DiCaprio, a backlash that is still going on to this day. (TITANIC is always high on one of those "Worst movies to win Best Picture Oscar" lists.) I think now people respect DiCaprio's acting ability (at least, I think they are beginning to), but I also think DiCaprio still isn't very popular among the general public. His association with Scorsese is the real reason for most of his box office success (THE GREAT GATSBY was a bomb, at least in America). I do have to say that DiCaprio is a very good actor--but he's really a character actor, not a major leading man. In the future will DiCaprio continue working with Scorsese, or will he find a "heroic" role and put his career on a different path like Robert Downey Jr. did after starring as Iron Man?