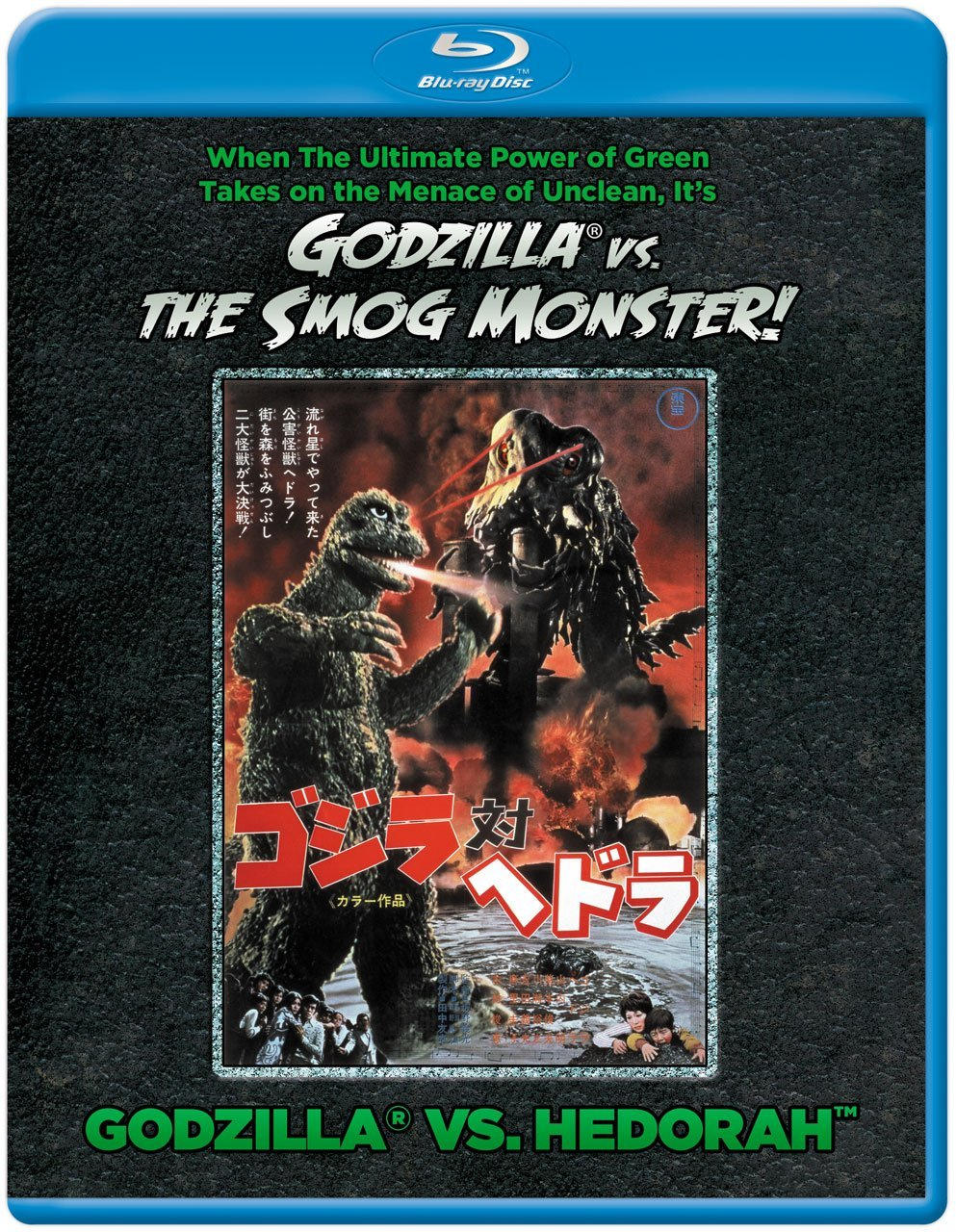 Next up on my look at the Kraken Releasing series of classic Godzilla Blu-rays is GODZILLA VS. THE SMOG MONSTER (also known as GODZILLA VS. HEDORAH). This is one of the most famous Godzilla movies of all time, mostly because of the title, and for the lousy reputation it has.

The monster Hedorah is actually a product of mankind's pollution (although it is suggested in the story that the original version of Hedorah may have come from outer space). Hedorah is not only made of pollution, it feeds on it as well--which makes it almost impossible to destroy. Hedorah may be one of Godzilla's goofiest foes, but he certainly does give the King of the Monsters a run for his money (Godzilla acts rather silly throughout most of the film, and appears to be off his game).

GODZILLA VS. THE SMOG MONSTER (1971) is usually considered by most to be a horrible film, even by hardcore Kaiju fans. It's not so much bad as bizarre. On the one hand the movie has a wild early 70s psychedelic vibe to it--there's a theme song, a scene at a disco, weird animated sequences, and even some split-screen work. But on the other hand there are a lot of dark moments in the story--we see several views of dirty rivers and seas, smoke-filled skies, and various detritus and decay. The movie certainly does not have the bright, colorful look of the earlier Ishiro Honda/Godzilla extravaganzas. We are also shown individual deaths of innocent victims--something that was almost never seen in a Japanese fantasy film since the earlier Toho monster movies of the 1950s.

The combination of wacky weirdness and dark foreboding over the Earth's ecology makes for a story that resembles a Gamera tale instead of a Godzilla feature. There is of course, an annoying "cute" kid, who apparently "dreams" Godzilla into showing up to fight Hedorah. And not only is there the aforementioned disco scene, there's also a teenage rave held on the slopes of Mt. Fuji (I'm sure that if there were a couple of giant monsters fighting in my vicinity, I could think of better things to do).

The most memorable highlight in this production (other than the title song, which I'll get to) is the scene where Godzilla.....flies. Yes, that's what I said--the big G tucks his tail between his legs and uses his atomic breath as a sort of jet propulsion, and off he goes. I have to admit it's a rather impressive feat, but Godzilla never attempted the stunt again (maybe there were insurance concerns).

As for the title song, it is one of the reasons for so many people looking down on this film. That's because in the American version of this, the song was dubbed into English and called "Save the Earth". On this Kraken Blu-ray the song is in the original Japanese...but it is NOT subtitled, which is a shame. I think Kraken should have tried to include the English-dubbed version of the song as an extra, since it is one of the most remembered parts of the movie (for better or worse).

Kraken Releasing's Blu-ray of GODZILLA VS. THE SMOG MONSTER is without doubt the best version of this title so far. The picture quality is fine (even though the film is supposed to be somewhat murky-looking), and the sound is excellent. There is the original Japanese dialogue track with subtitles (except for the songs, as mentioned) and there is a English-dubbed dialogue track. The only extra is the original Japanese trailer.

GODZILLA VS. THE SMOG MONSTER is one of the weirdest films of all time. It tries to be a dark 1970s ecological thriller, while at the same time it is also a goofy kid-friendly monster flick. The fact that the director (Yoshimitsu Banno), the composer (Riichiro Manabe), and the FX supervisor (Teruyoshi Nakano) were all brand-new to the Godzilla series may account for the film's uneven tone. Monster movie and Kaiju fans will still want to add this Blu-ray to their collection.