INDIANA JONES AND THE TEMPLE OF DOOM--30th Anniversary 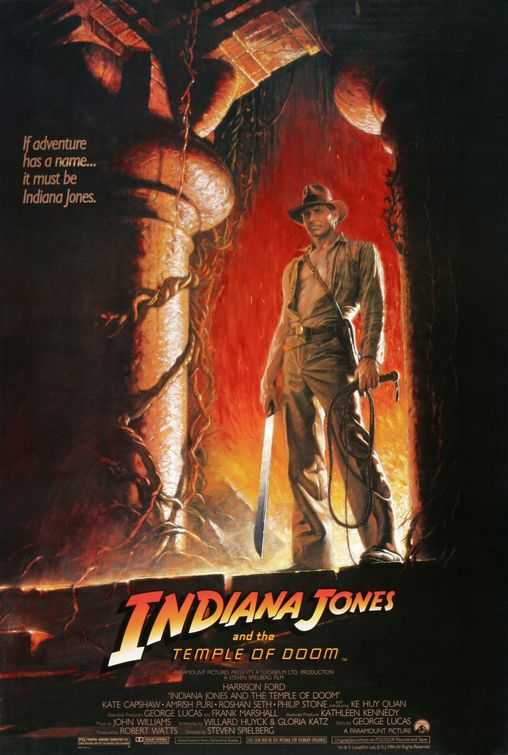 Here's something that will make you feel old....on this day 30 years ago, INDIANA JONES AND THE TEMPLE OF DOOM made its theatrical debut. George Lucas and Steven Spielberg's prequel to RAIDERS OF THE LOST ARK made a huge sum of money during the summer of '84, but it certainly does not live up to its predecessor.

It's fair to say that TEMPLE OF DOOM may be one of the strangest mainstream summer blockbuster movies of all time, right alongside BATMAN RETURNS. This Indiana Jones adventure saddles the archaeologist with not just an annoying leading lady, but an annoying kid sidekick as well. The movie is filled with goofy attempts at humor--and as every film buff knows, any time George Lucas (or Spielberg for that matter) tries to be funny, it usually falls flat. (There was humor in RAIDERS....but the humor there came out of the situations, instead of being forced.)

What makes TEMPLE OF DOOM so strange is that, right alongside the silly comedy, there is a huge amount of very disturbing plot material. This is a movie that features:

Dozens of malnourished children being held as slaves and forced to work in a mine.

A cult that worships an evil god, practices strangulation, and believes in human sacrifice.

A man being strapped down, having his heart torn out, and then (while still alive) lowered into a lava pit.

The female lead also being strapped down, and almost lowered into a lava pit.

The hero and his kid sidekick being tied up and whipped.

The hero becoming possessed by evil and striking his kid sidekick.

And that list doesn't even mention the infamous "chilled monkey brains" sequence, where various Indian characters are shown eating bugs, snakes, worms, and other slimy animals. (For being supposed left-wing guys, Lucas and Spielberg somehow manage to offend a lot of ethnic groups in their movies.)

The juxtaposition of weird humor and dark tidings makes for a very uneven script. Lawrence Kasdan, the screenwriter of RAIDERS, was originally offered the chance to write TEMPLE OF DOOM, and he wisely turned it down. The final script was written by the team of Willard Huyck and Gloria Katz, old friends of George Lucas (in fact they had polished up Lucas' script for the original STAR WARS).
Apparently Huyck and Katz were "experts" on India and its culture, but it seems that they gained all their knowledge from old cartoons. One gets the feeling that Huyck and Katz put in all the goofiness to offset the dark violence.

Harrison Ford IS Indiana Jones, no ifs ands or buts, and he does the most to make the picture work. Indy is a bit more rougher around the edges than in RAIDERS, and there are times when the real Ford looks personally exasperated on having to deal with Kate Capshaw as leading lady Willie and Ke Huy Quan as sidekick Short Round. One assumes that these characters were put into the story to "humanize" Indy, but they just spend most of the time getting in the way. Steven Spielberg fell in love with Kate Capshaw during the making of TEMPLE OF DOOM (they later married), and maybe that's why as a director he wasn't able to see how problematic the role of Wille is. I can understand wanting someone who was different than Karen Allen in RAIDERS, but Willie winds up being nothing more than a caricature.

As for Short Round....the idea that Indy would drag this kid along into so much danger kind of makes Indy look like a jerk instead of humanizing him. The poor kid has almost the same type of legacy now as Jar Jar Binks and the Ewoks.

Now that I've gotten the whining and moaning out of the way.....there are a number of spectacular action scenes in TEMPLE OF DOOM, especially the mine car chase and the rope bridge sequence. This movie showcases ILM at its very finest--and remember, all this work was done before the age of CGI. Douglas Slocombe's cinematography gives the film an almost David Lean-like look (before you say anything, I said "almost"), and John Williams contributes another epic musical score. TEMPLE OF DOOM certainly isn't perfect, and it certainly isn't RAIDERS, but it does deliver a wild, exciting movie-viewing experience....which is the reason why it was made.

As stated earlier TEMPLE was a huge financial success (I believe it broke the record for the biggest opening weekend ever). TEMPLE also generated a fair amount of controversy for its mix of children-in-peril and grossness, so much so that it helped lead to the development of the PG-13 rating. Because of this you could truly say that TEMPLE changed movies forever. The PG-13 rating has now become the Holy Grail for anyone wanting to produce a major mainstream box-office hit.

What is the real legacy of INDIANA JONES AND THE TEMPLE OF DOOM? Well....it makes RAIDERS OF THE LOST ARK look that much better.