ONCE UPON A TIME IN AMERICA: The Extended Director's Cut On Blu-ray 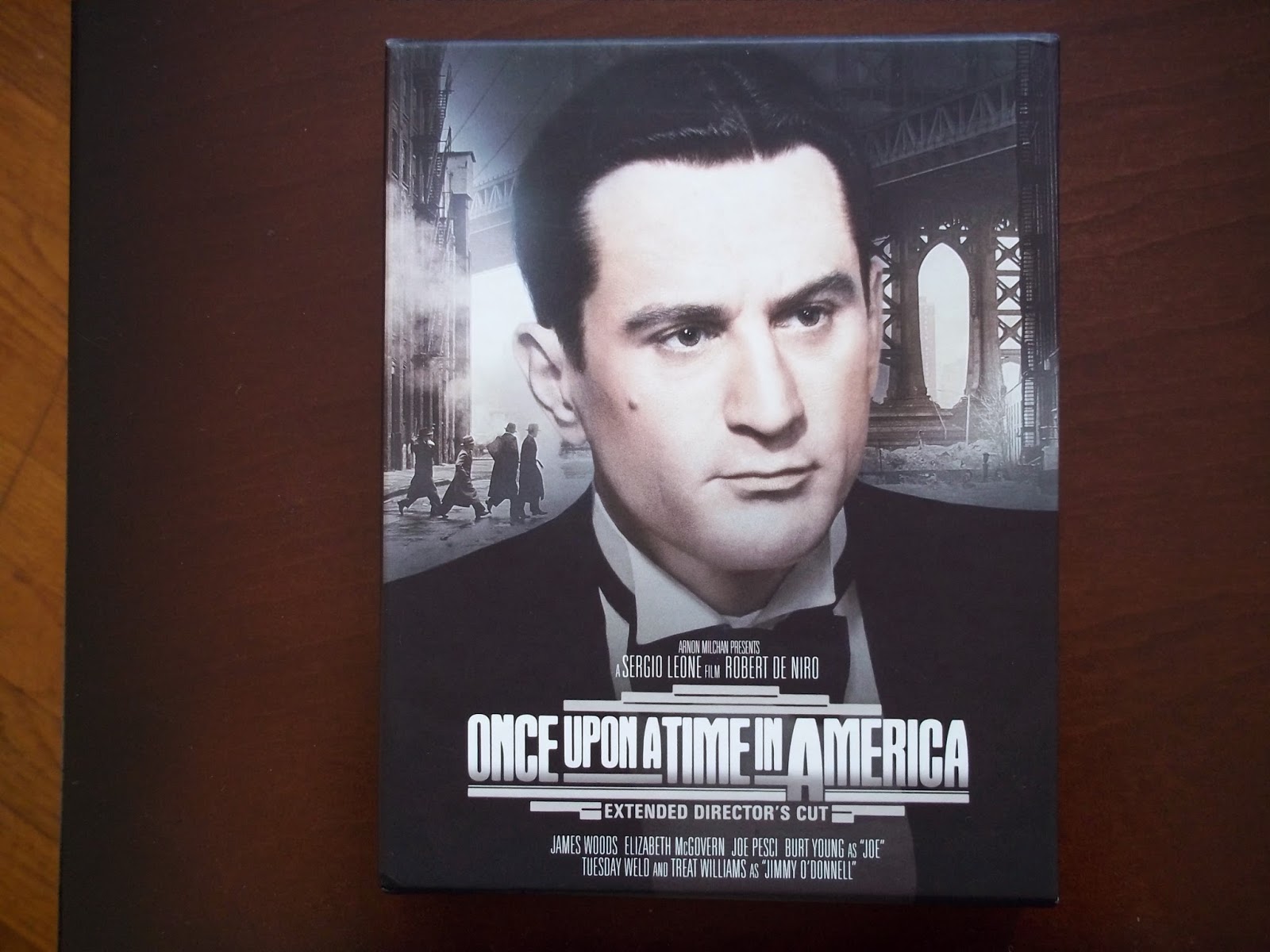 Sergio Leone may have died in 1989, but his films continue to get longer and longer. Warner Home Video has just released an "Extended Director's Cut" version of ONCE UPON A TIME IN AMERICA on Blu-ray. Leone's gangster epic now clocks in at 251 minutes--the restored theatrical version available on home video had a running time of 229 minutes.

If you are familiar with this blog in any way, you know about my admiration for Sergio Leone and my love for his cinematic work. I first saw ONCE UPON A TIME IN AMERICA on a pan & scan video cassette (I've never seen this picture in a proper theater). I wasn't really all that taken with it on first viewing. I thought it was slow and confusing, and I was expecting something along the lines of Leone's Westerns. After seeing it a number of times over the years, I've grown to appreciate it more and more. ONCE UPON A TIME IN AMERICA is not a simple film, nor is it an easy viewing experience. It is a movie which requires attention, and thought, on the part of the audience.

Sergio Leone had tried for years to bring this story of a group of young Jewish gangsters in early 20th Century New York City to the big screen. When ONCE UPON A TIME IN AMERICA was released in American theaters in 1984, it was an edited edition that mangled the non-linear storyline. The restored 229 minute version has long been available on home video, and it is considered by some to be Leone's masterpiece.

This "extended director's cut" restores 22 minutes of footage. All of the added scenes are important, and they all add to the complex storyline. (They also add the entire performance of Louise Fletcher, who had been cut out of the film.) This restored footage, however, is not of the same quality as the rest of the film. The footage isn't terrible (the quality isn't as bad as the restored scenes in Criterion's Blu-ray of IT'S A MAD MAD MAD MAD WORLD), but there is a noticeable picture change when one of these scenes pops up.

The picture quality of the rest of the 251 minute ONCE UPON A TIME IN AMERICA has caused some internet controversy. The image is much sharper than the 229 minute Blu-ray version (which is included in this package), but the colors seem to have been desaturated a bit. There are some reviewers saying that the 251 minute edit looks horrible. I don't agree with that--I certainly can't tell you exactly how Leone wanted this film to look--but I do have to point out that this 251 minute ONCE UPON A TIME looks different than the 229 minute version.

Is this difference important? According to the 32-page mini-booklet included with this Blu-ray, the 251 minute edit was restored and prepared under the supervision of Sergio Leone's family and his surviving collaborators. If the color was all wrong, you'd think someone would have noticed or objected. There's plenty of film buffs out there who are steamed up about it (which is getting to be par for the course for just about any movie released on Blu-ray these days).

Whatever version of ONCE UPON A TIME IN AMERICA you watch (or accept), you are going to see a magnificent piece of work. ONCE UPON A TIME IN AMERICA is comparable to a great multi-layered novel--there's so much to take in, and so many nuances of the story to understand, that it demands repeat visits. That's probably the reason it took me a while to get into it. I actually think that this film works better at home than in a theater--at home you can stop and go over certain scenes, just like in a novel, whereas in a theater I believe the average audience member would be too distracted to give four hours of attention to a difficult plot.

ONCE UPON A TIME IN AMERICA was Sergio Leone's last feature film as a director, and he went out on the top of his game. His recreation of New York's Lower East Side, circa 1910s, looks as authentic as a series of photographs (and Leone did it without matte shots or CGI). The production design of Carlo Simi is astounding, and Ennio Morricone's music score has now reached legendary status. As for the cinematography of Tonino Delli Colli....a number of his shots are simply breathtaking.

Having said all that.....I can see why some people, even Leone fans, would not get into this film. This is a story about American gangsters, no doubt. But if you are looking for something on the same level as THE UNTOUCHABLES or SCARFACE, this picture is not it. There is violence, and gunplay--but it is not the typical "fun & exciting" movie violence. ONCE UPON A TIME IN AMERICA is more European art film than ordinary gangster flick.

There's also the fact that while all of the film's many characters are interesting, none of them are very appealing. Robert De Niro's Noodles, for example, commits violent sexual assault twice. There is a large streak of cynicism throughout all of Leone's work, and it is never more apparent than in this film. And then there is the movie's ambiguous ending, which will leave many shaking their heads.

ONCE UPON A TIME IN AMERICA has its faults, as do all films directed by Sergio Leone....but it is still pure cinema at its finest, and it is the type of film that will more than likely never be made again.

A movie like ONCE UPON A TIME IN AMERICA really deserves the Criterion treatment. Any Blu-ray package for it should include tons of extra features and documentaries detailing the film's production. This Extended Director's Cut has with it a 32 page mini-booklet, which has some nice photos and a few factoids on the movie. It's okay, but it really doesn't begin to scratch the surface with a project such as this. The other extras are those that appeared on the earlier release of the 229 minute cut. Having the 251 minute and 229 minute cuts in one package is good...but I must admit I kind of wish this had included the now-notorious 139 minute version put out in U.S. theaters, just so I could see how bad it plays.

The lack of extras is disappointing, but that shouldn't stop anyone from buying this Blu-ray. An extended version of ONCE UPON A TIME IN AMERICA should be seen by all those who truly love great cinema.