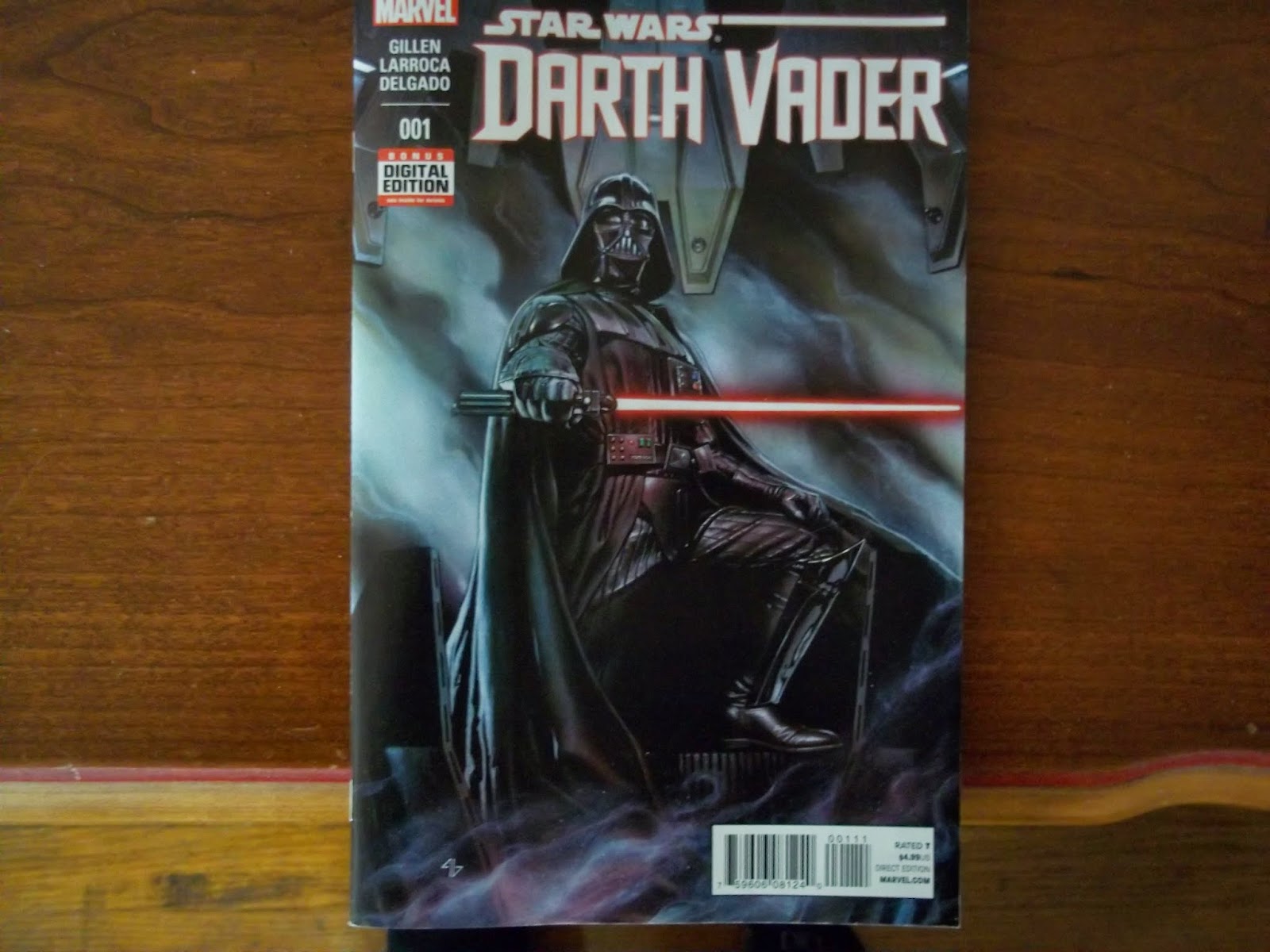 Last December I wrote a review about the Star Wars Novel TARKIN. In it I mentioned how the Disney Corporation--the new owners of Lucasfilm--have decided that any new non-movie Star Wars material would be considered as "official" Star Wars history. In other words, all the Star Wars stuff that will be created under the auspices of Disney "counts", and all the old "Expanded Universe" product will be pushed aside.

Some Star Wars fans are a bit piqued about that...it doesn't really bother me, I never paid all that much attention to the Expanded Universe to begin with. What Disney is doing is consolidating the Star Wars fictional empire--they have a lot of movies planned, so it makes sense to bring some order to all the various books, video games, and media devoted to the Star Wars Universe.

One of the big new Star Wars/Disney offerings is a comic book agreement with Marvel. Original Star Wars fans will remember that it was Marvel that published the official comic book movie adaptation of the first STAR WARS in 1977. That adaptation was hugely influential--I know that as a little kid I actually read the Marvel Star Wars movie comic before I had a chance to see the film. Marvel continued making Star Wars comics for a few years after, then the rights were later taken over by Dark Horse comics. Dark House put out some okay material, but they seemed more interested in stories that had very little to do with the core Star Wars original trilogy characters.

A Marvel/Disney/Star Wars combination is huge. Those are three of the biggest names in the entertainment industry right now. Currently there is a regular Star Wars comic, which takes place right after the events of the 1977 film, and a special Darth Vader title (a comic on Princess Leia is scheduled to debut in March). The Star Wars and Darth Vader titles share the same storyline, and I assume the Leia issues will also. It appears that Disney and Marvel want to make sure that this new Star Wars comic line has a consistent tone and look to it. It's rather telling that the series is focusing on the original trilogy characters having adventures during the original trilogy time period. That's what most Star Wars fans want to see (well, at least it's what I want to see).

As an original Star Wars fan I can wholeheartedly assure you that the new Marvel comics have the right feel to them. Hopefully this feeling will continue throughout future issues. The folks at Marvel must have went out of their way to do Star Wars properly--they had to have known that any type of disappointment from hard-core fans would be displayed all over the internet. So far, from what I can tell, the new Marvel Star Wars has been received enthusiastically.

Another new Star Wars product is the computer-animated TV series STAR WARS: REBELS. The show debuted last fall and it plays on the Disney XD channel. At first glance the series is reminiscent of STAR WARS: THE CLONE WARS, but REBELS is set four years before the events of the 1977 feature film. The first batch of episodes has featured such original trilogy characters as C-3PO, R2-D2, Darth Vader, Lando Calrissian, and Grand Moff Tarkin. STAR WARS: REBELS also has what I believe is the right feel to it. Having the series set nearer to the events of the original trilogy certainly helps.

It appears to me that Disney is going back to the original trilogy as much as they can....maybe in an effort to prove that they know how to make authentic Star Wars material. The original trilogy of Star Wars movies have now become modern mythology. So far Disney is playing to the strengths of the Star Wars franchise. Will that translate into good feelings for all the upcoming Star Wars feature films? It remains to be seen how those projects will accepted, but with STAR WARS: REBELS and the new Marvel comics, Disney is off to a good start. They can really win the fans over by releasing the REAL original trilogy on Blu-ray.