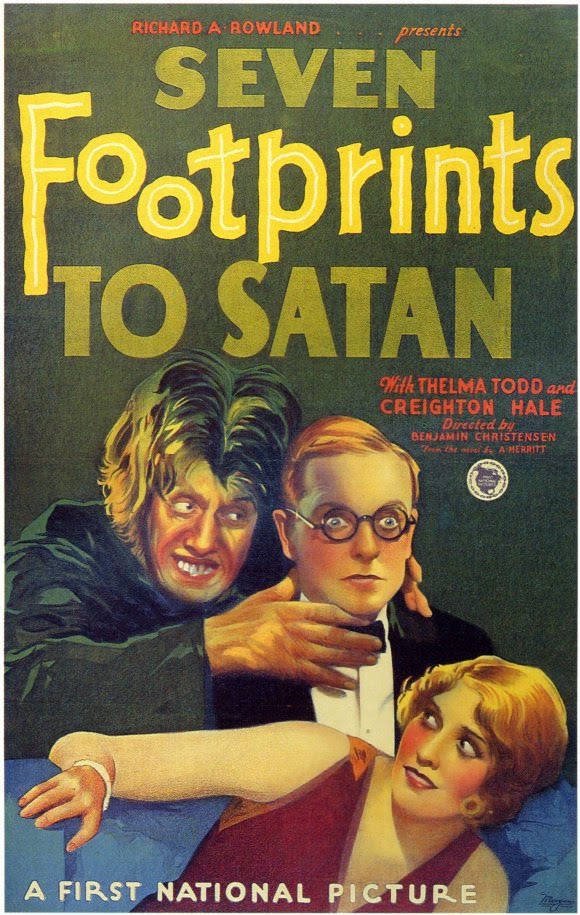 I recently found on YouTube a "restored" version of the silent mystery thriller SEVEN FOOTPRINTS TO SATAN, produced in 1929 by First National and directed by Benjamin Christensen. This YouTube video was produced by Eric Stedman of The Serial Squadron company, and it features a new score by Kevin McLeod.

The Danish Benjamin Christensen is best known for making the ultra-cult silent film HAXAN, a bizarre docu-drama about the history of witchcraft. If you are a silent film aficionado and you haven't yet seen HAXAN, you really ought to--it is one of the weirdest and wildest silent films of all time. After HAXAN Christensen found his way to Hollywood, were he directed the great Lon Chaney in the melodrama MOCKERY, a story about a peasant caught up in the Russian Revolution. Christensen went to First National to make a trio of horror-mysteries. The first film, THE HAUNTED HOUSE, and the third film, THE HOUSE OF HORROR, are considered lost.

The second film, SEVEN FOOTPRINTS TO SATAN, survives, but not in the best condition. The print shown in the YouTube video is so soft visually that at times you can barely see the actors' faces. The real restoration here is new English title cards and a new music score.

The movie starts out by introducing us to James Kirkham (Creighton Hale), who has recently inherited his father's wealth. Jim wants to go off to Africa in search of adventure, an idea scorned by his Uncle Joe and his girlfriend Eve (Thelma Todd). At a party Jim and Eve are suddenly whisked away to a spooky mansion, where they encounter all sorts of mysterious goings-on. Among the strange characters that the couple encounter are a dwarf, a hideous crone, a crazed man on crutches, a flapper version of Morticia Addams, and a gorilla.

Jim and Eve learn that all the crazy incidents are orchestrated by a man known only as "Satan". Jim eventually learns what's really behind it all--and if you are familiar with American silent movie thrillers of the 1920s, you can probably guess how things turn out. I'm not going to reveal the climax, but I will say that the end does not justify the means to it.

SEVEN FOOTPRINTS TO SATAN features just about every typical silent thriller trick in the book. There's sliding panels, characters being watched in secret, forbidding servants, a gorilla running around loose, etc. What makes this movie different is that tries to up the ante with some rather grotesque behavior. The story intimates that the various denizens of the mysterious house engage in floggings, devil-worship, and other forms of debauchery. We don't actually see anything of the sort taking place (and if you see the movie's ending, you'll know why), but the fact that such naughtiness is even suggested makes it unique among American silent thrillers. (While doing some research on this film I came across a review posted on IMDB website which compared SEVEN FOOTPRINTS to Kubrick's EYES WIDE SHUT--a comparison which isn't really that far off the mark.)

Creighton Hale, who plays Jim, also had the male lead role in the 1927 version of THE CAT AND THE CANARY. Hale gives almost exactly the same performance in this movie as he did in the earlier one--he even wears the same type of glasses. Hale spends most of his time looking scared (there's even a shot of his knees knocking), but he does show a bit of backbone at the end. The gorgeous Thelma Todd, best known for her roles with just about every classic Hollywood movie comedian, plays Eve in the usual damsel-in-distress manner. Todd was also in Christensen's THE HAUNTED HOUSE and THE HOUSE OF HORROR, which makes her a sort of early-day scream queen. When you think about it, running about and reacting broadly to events around her gave Thelma some good practice in dealing with the likes of Laurel & Hardy and the Marx Brothers.

It's too bad that this print of SEVEN FOOTPRINTS TO SATAN shown on YouTube is not that impressive. Benjamin Christensen and cinematographer Sol Polito go heavy on the shadows and the atmosphere, and if the film were better looking, a viewer might better appreciate the filmmakers' work. The new music score by Kevin McLeod is serviceable, and the soundtrack has been augmented by effects such as gunshots and screams--I personally feel that the sound effects were unnecessary.

I believe that any classic horror film fan should take the opportunity to see SEVEN FOOTPRINTS TO SATAN at least once. The movie has a lot of appetizing elements to it--but the ending does not make proper use of those elements. (It has to be pointed out that the ending was par for the course for just about every American mystery thriller made at the time.) Thelma Todd fans should watch it since it is (so far) the only surviving evidence of her short tenure as a scream queen. 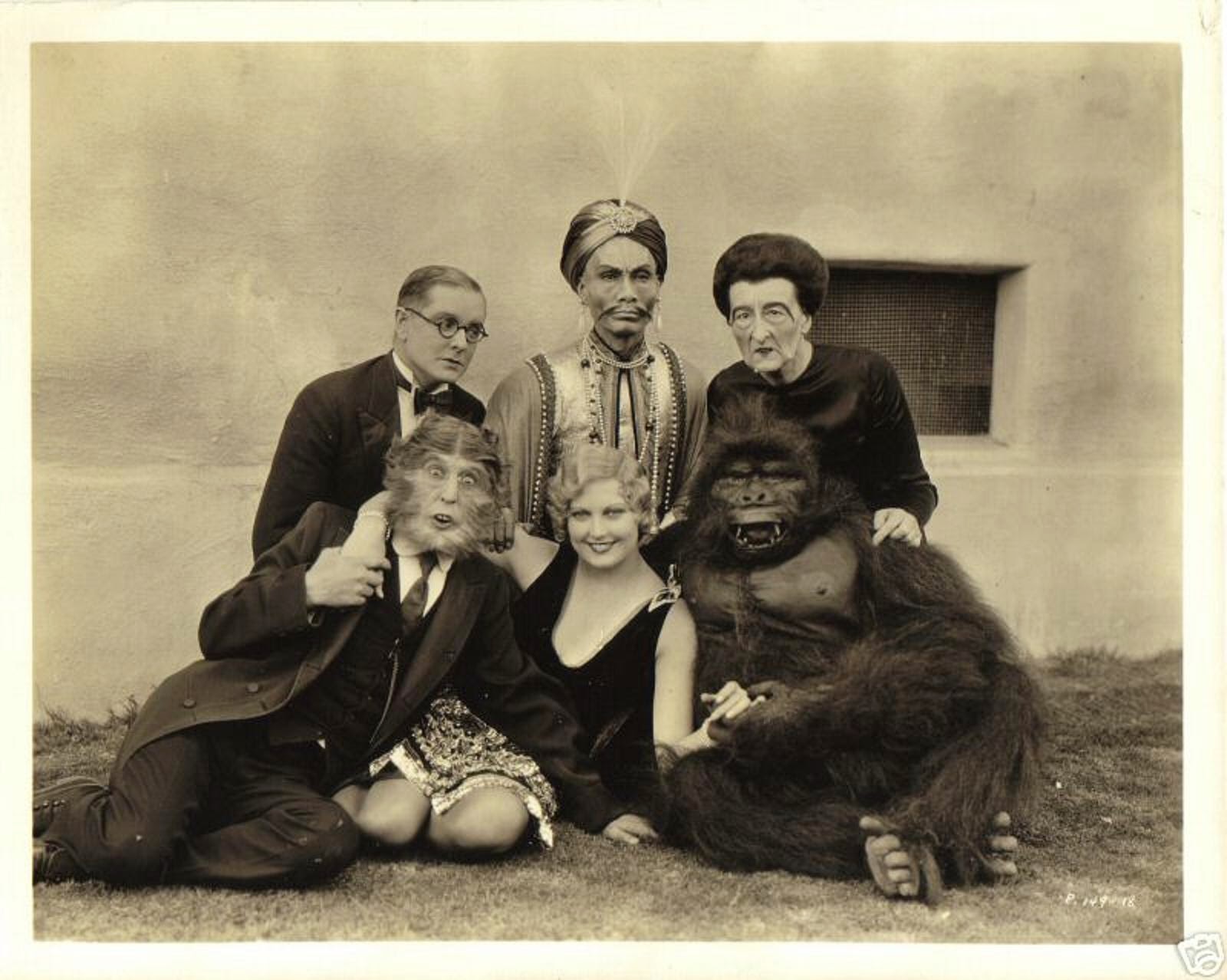