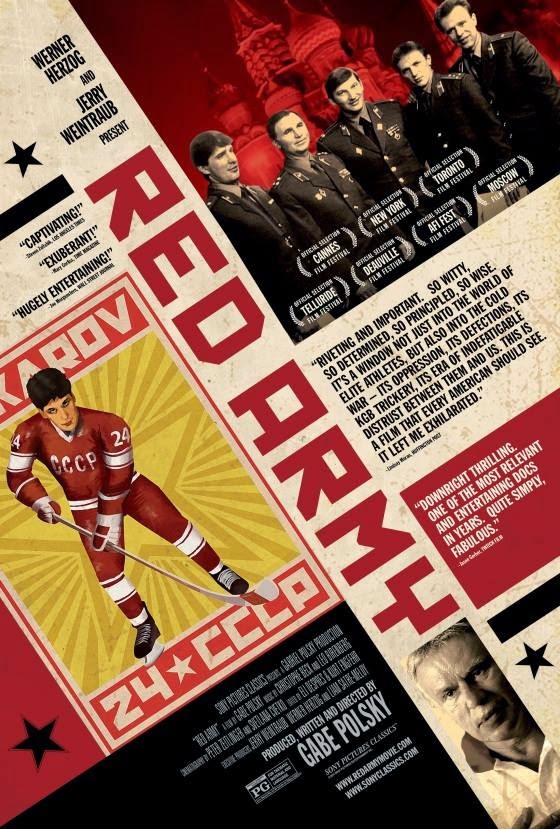 *In the interests of full disclosure, I must admit that this blog post was written by a lifelong Chicago Blackhawks fan.

One of the most powerful and feared sports teams of the 1970s and 1980s did not play for a North American professional league. The Soviet Union's Red Army Hockey Club was considered all but invincible back then, so much so that when it was defeated in the medal round by the United States team in the 1980 Winter Olympics, it was looked upon as one of the greatest upsets in sports history.

One of the leaders of that team was superb defenseman Viacheslav ("Slava") Fetisov. Fetisov's story is the main focus of Gabe Polsky's documentary RED ARMY.

Through several interviews with Fetisov, we are taken back to the time of the Cold War and Soviet domination of international hockey. We see how hard it was to become a Red Army player in the first place, and how it was even harder to be a fully-fledged member of the team. I always assumed that great athletes in the Soviet Union got special privileges, but RED ARMY shows that more often than not the players were worked like dogs (and they were just about treated like dogs as well).

After the Red Army's loss against the U. S. in 1980, the team went on to win the Gold Medal in the next two Olympics. Despite that Fetisov and his teammates became increasingly dissatisfied with their tyrannical head coach, Victor Tikhonov. By the late 80s and early 90s a number of Russian players began leaving their country to go to the West and play in the National Hockey League, and Fetisov was among them. Fetisov's arrival in North America brought on a whole new series of problems, but eventually he and his fellow Russian players were accepted in the NHL, and Fetisov went on to play on two consecutive Stanley Cup champions with the Detroit Red Wings.

After his retirement as an active player, Fetisov went back to Russia and was named Minister of Sport by Vladimir Putin. His challenge today is trying to keep hockey relevant in a country that has become chaotic since the downfall of the Soviet Union.

RED ARMY is obviously a film about sports, but don't make the mistake of thinking that only hardcore hockey fans will enjoy it. When I was a kid the Red Army hockey team was portrayed as a monolithic machine. Gabe Polsky shows the viewer that the members of that team were unique individuals in their own right, not just representatives of a repressive regime. The most unique of all is Slava Fetisov. The legendary defenseman may have spent of lot of time in the West, but he is certainly not "Americanized". Fetisov is man of few words--he shows more but not saying something than by talking. Polsky wisely keeps the camera tight on Fetisov during these quiet moments (put a camera on an American athlete and he or she will do nothing but talk). RED ARMY also shows Fetisov as a very proud man who has a bit of an edge to him (which is understandable when one thinks about the circumstances under which Fetisov has lived).

There is plenty of stuff here for hockey addicts to lap up, such as rare footage of the Red Army team in action, and interviews with hockey greats such as Scotty Bowman and several of Fetisov's Russian teammates. (If you happen to be a fan of the chant "Detroit Sucks", be warned--there's plenty of Red Wings footage toward the end.) There's even a voice cameo from the great hockey announcer Pat Foley.

For those not so sports-inclined, RED ARMY also serves as a cultural history of the late 20th Century and the late Soviet Union. The documentary does not choose political sides, but after watching it a viewer cannot help but look upon the Russian nation with sorrow--the Communist system is still cursing the country and its people to this very day. If Fetisov and his former teammates come off as a bit hard to read, one has to remember what these men went through and the times they lived in.

Entertaining, informative, and amusing, RED ARMY is an fine documentary that should be seen by even those who have no interest in competitive sports. I can't help but wonder what Producer/Writer/Director Gabe Polsky's next project will be.