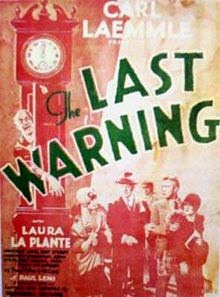 Another famous silent film that I was able to see for the first time recently is Universal's 1928 mystery thriller THE LAST WARNING, directed by Paul Leni. Apparently THE LAST WARNING featured some talkie sequences upon its release, but the version I saw on YouTube did not include such scenes.

Universal has always promoted the heck out of its "Classic Monsters" line of films, but the company as of now seems to have no interest in the great silent movies produced under their banner. The 1923 THE HUNCHBACK OF NOTRE DAME and the 1925 THE PHANTOM OF THE OPERA have fallen into home video public domain--you can find decent DVDs of both titles, but they won't be from Universal Home Video. The two famous films directed by Paul Leni at Universal before THE LAST WARNING--THE CAT AND THE CANARY and THE MAN WHO LAUGHS--are available on DVD also from other companies. THE LAST WARNING, as far as I know, does not even have an "official" DVD release. Why Universal refuses to take advantage of its legendary silent film heritage is rather puzzling. Monster movie buffs would definitely buy an official Universal Silent Thrillers box set. My guess is that the company just doesn't want to spend the money to remaster and refurbish a bunch of silent films that they feel will have very little attraction to the mainstream video marketplace.

The German-born Paul Leni (1885-1929) is not as famous as Tod Browning and James Whale, but perhaps he should be. Leni started out as a set & costume designer in his native land, and he was part of Germany's Expressionist film movement. Leni directed the dark anthology film WAXWORKS (1924), starring such acclaimed performers as Conrad Veidt and Emil Jannings. Leni was brought to Hollywood by Universal, where he directed the aforementioned THE CAT AND THE CANARY and THE MAN WHO LAUGHS. Both films, particularly the former, were successes, and Leni's next project had a lot of similarities with CANARY--it too was based on a play and it was also an "Old House" thriller, except in this case the old house is a abandoned Broadway theater.

At the beginning of THE LAST WARNING, we are shown the death of actor John Woodford, which happens on stage during a performance of his latest play. Woodford's body disappears before an autopsy can be administered, and the resulting scandal over the murder causes the theater (named after Woodford) to close down. Years later a producer named McHugh (Montagu Love) decides to re-open the theater and stage the exact same play that John Woodford was acting in at the moment of his demise. McHugh even hires some of the same actors and backstage crew that were also present that fateful night. As expected, numerous strange occurrences happen before all is revealed.

THE LAST WARNING is more of an impressive exercise in cinematic style than it is a riveting mystery. Cinematographer Hal Mohr's swooping subjective camera is everywhere--it ducks under a falling stage curtain, it swings on a rope over the backstage area along with the killer, and it looks up from the ground floor to the box seat patrons peering down from above. (If the theater looks familiar, that's because it is the Paris Opera House theater & stage set from THE PHANTOM OF THE OPERA.) Not only is the camerawork intriguing in THE LAST WARNING, the title cards are as well. The titles expand, contract, or go in and out of focus, depending on the circumstances of the story or the mood of the characters. The look of the titles of a silent film can be just as important as the acting or the production design (unfortunately most restored silent films do not have their original title cards).

Despite the fact that the Woodford Theater is set in downtown 1920s New York City, it is just as much of a spooky run down place as those featured in other examples of the silent movie mystery film. The abandoned theater is a perfect set for a director like Leni to play around in. It has plenty of trap doors, hidden rooms, and other surprises. The theater is almost a character itself--when we are shown the front part of the building, it resembles a dour human face.

As for the actual human characters in THE LAST WARNING, there are a number of actors in this film that have connections to several famous productions. Leading man John Boles was in Universal's 1931 FRANKENSTEIN, and Mack Swain, who plays one of the theater's owners, appeared alongside Charlie Chaplin in THE GOLD RUSH. Laura La Plante, who starred in THE CAT AND THE CANARY, plays a similar role here, but she doesn't have as much to do as she did in the earlier movie. Margaret Livingston, best known as "The Woman From the City" in F. W. Murnau's SUNRISE, gets a showy part as a flirty actress who isn't what she seems--one of the reasons she attracts the viewer's attention is that the subjective camera gives a nice look at her legs. 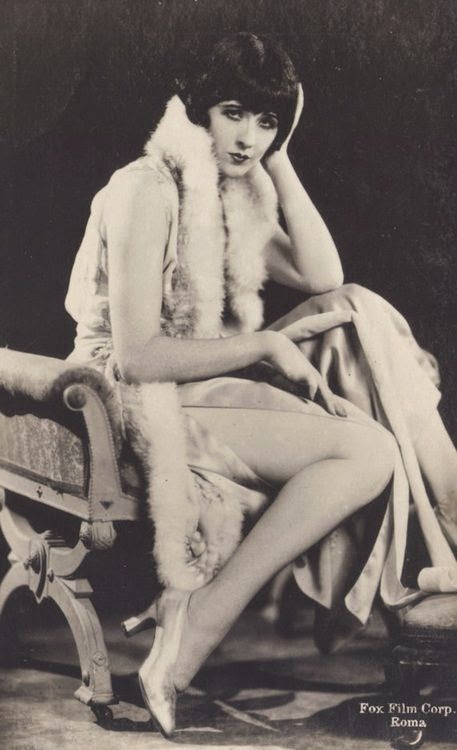 The version of THE LAST WARNING that I watched on YouTube ran about 78 minutes. The picture quality was acceptable, but certainly not great. It would be fantastic if a company like Kino, or Criterion, or Flicker Alley, could fully restore THE LAST WARNING and put it out on Blu-ray (I would especially like to see the talking sequences that were prepared for this film).

Sadly Paul Leni died in 1929 at the age of only 44, due to blood poisoning. The question that has to be asked is, "What if Paul Leni had lived?" Would he have been given the assignment to direct Universal's adaptation of DRACULA? Or FRANKENSTEIN? Would the entire Classic Monsters series produced at Universal have turned out differently, with Leni's involvement? We'll never know. What is a fact is that Leni was responsible for many outstanding examples of silent cinema, and he no doubt would have had the creativity and the talent to make an effective transition to the sound era. If you love silent film technique, you really should take the opportunity to see THE LAST WARNING.
Posted by Dan Day, Jr. at 1:56 PM