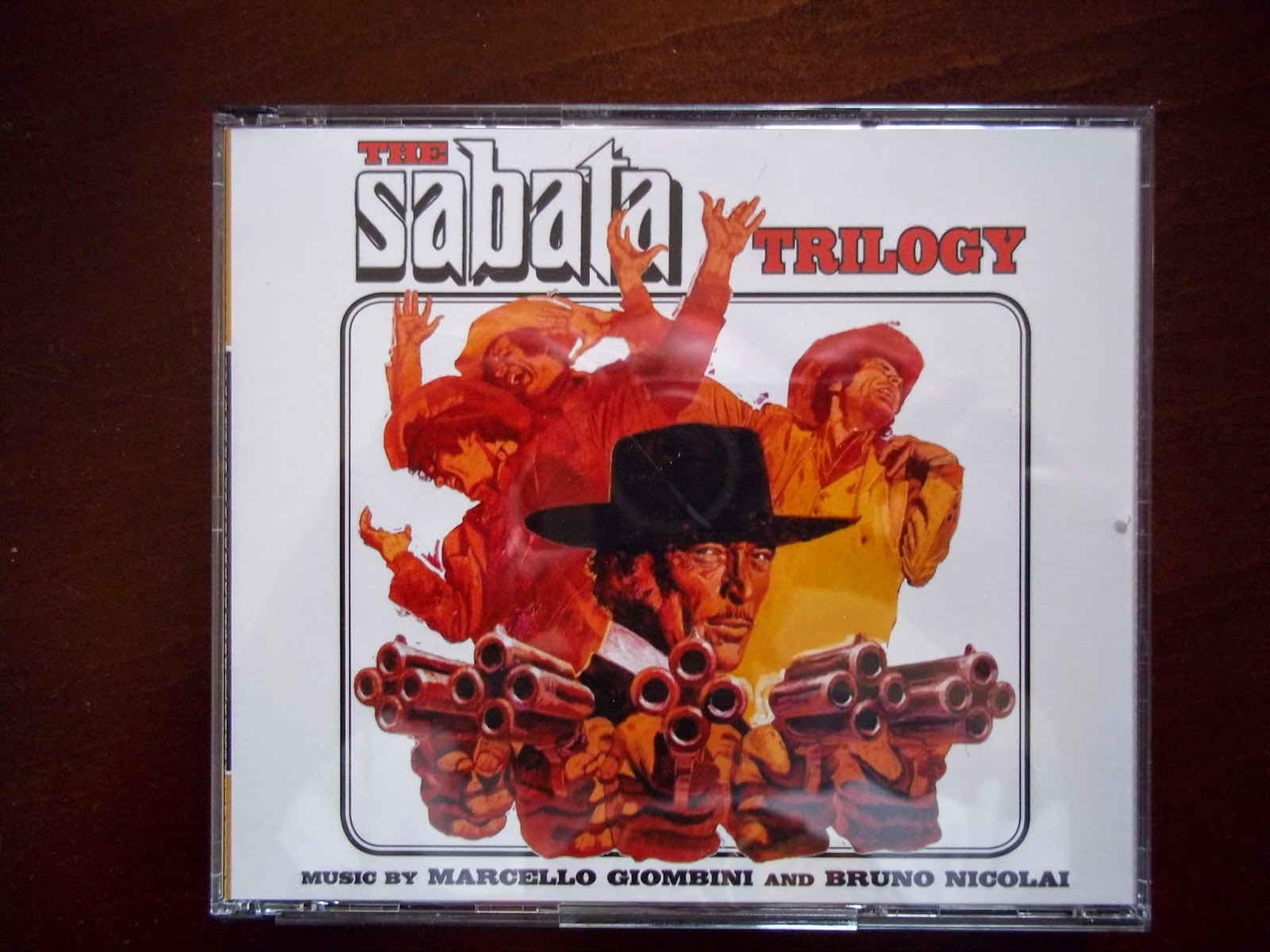 Screen Archives Entertainment is the place to go if you are looking for recently released rare movie soundtracks. SAE is particularly known for offering soundtracks from foreign films--they carry more Morricone CDs than you can shake a fistful of dollars at (see what I did there?). I have always loved the music of Spaghetti Westerns, and SAE has just come out with a 3 CD set containing the soundtracks of all three SABATA films.

All three SABATA films were directed by Gianfranco Parolini and written by Renato Izzo. The first starred Lee Van Cleef, and the actor played yet another variation on his "Colonel Mortimer" character from FOR A FEW DOLLARS MORE. The second film wasn't even supposed to feature Sabata....the movie was originally called INDIO BLACK, and Yul Brynner played the eponymous role. The first Sabata film was such a big hit in Europe that INDIO BLACK was rechristened ADIOS, SABATA, even though Yul Brynner didn't look or act anything like Lee Van Cleef. (The idea of changing the title of a Spaghetti Western to copy the success of another popular character was nothing new in that genre. There are dozens of European Westerns which have famous names like Ringo, Django, and Trinity in their titles even though they have nothing to do with those characters.) Van Cleef came back for the third film in the official series, RETURN OF SABATA.

The score for the first Sabata film was composed and conducted by Marcello Giombini. It certainly isn't as great as Ennio Morricone's work of the period, but it fits the film rather well. The music isn't as heavy or brooding as other Spaghetti Western scores, but SABATA isn't a heavy or brooding movie. This score is disc one in the collection and it has 21 tracks totaling about 55 minutes of running time.

The score for ADIOS, SABATA was composed and conducted by Bruno Nicolai. This one sounds the most like a Morricone work, which isn't surprising, considering that Nicolai had worked as an arranger with Morricone on various films. This score is far more in the expected tradition of Spaghetti Western music, and it is the best CD of the set. Throughout the score you can hear a choir chanting Indio Black! The soundtrack for ADIOS, SABATA has 24 tracks and runs about an hour.

Marcello Giombini returned to do the music for RETURN OF SABATA. This soundtrack is the wildest and most avant-garde of the set, with a title tune that has to be heard to be believed (just go on YouTube sometime and look it up). This score has 18 tracks and runs about 42 minutes.

All three scores feature the work of musician Alessandro Alessandroni, whose guitar work and whistling talent will be familiar to Ennio Morricone enthusiasts. The sound quality on all three scores is superb.

Included in the set is a nice 28-page booklet written by Randall D. Larson. Larson discusses the entire Sabata trilogy, looking at each film individually, and examining each film's music score. The booklet is filled with color photo stills from the film.

This set was produced by Quartet Records, and is limited to a run of 500 units. Screen Archives Entertainment is selling it for $29.95, which I think is a very good price for 3 CDs of rare Spaghetti Western music. Anyone who is a Italian Western fan will tell you how hard it is to get decent, official, high-quality versions of music scores for this genre. This set will make a great addition to any movie music fan's collection.
Posted by Dan Day, Jr. at 12:00 PM