TALES OF TERROR On Blu-ray 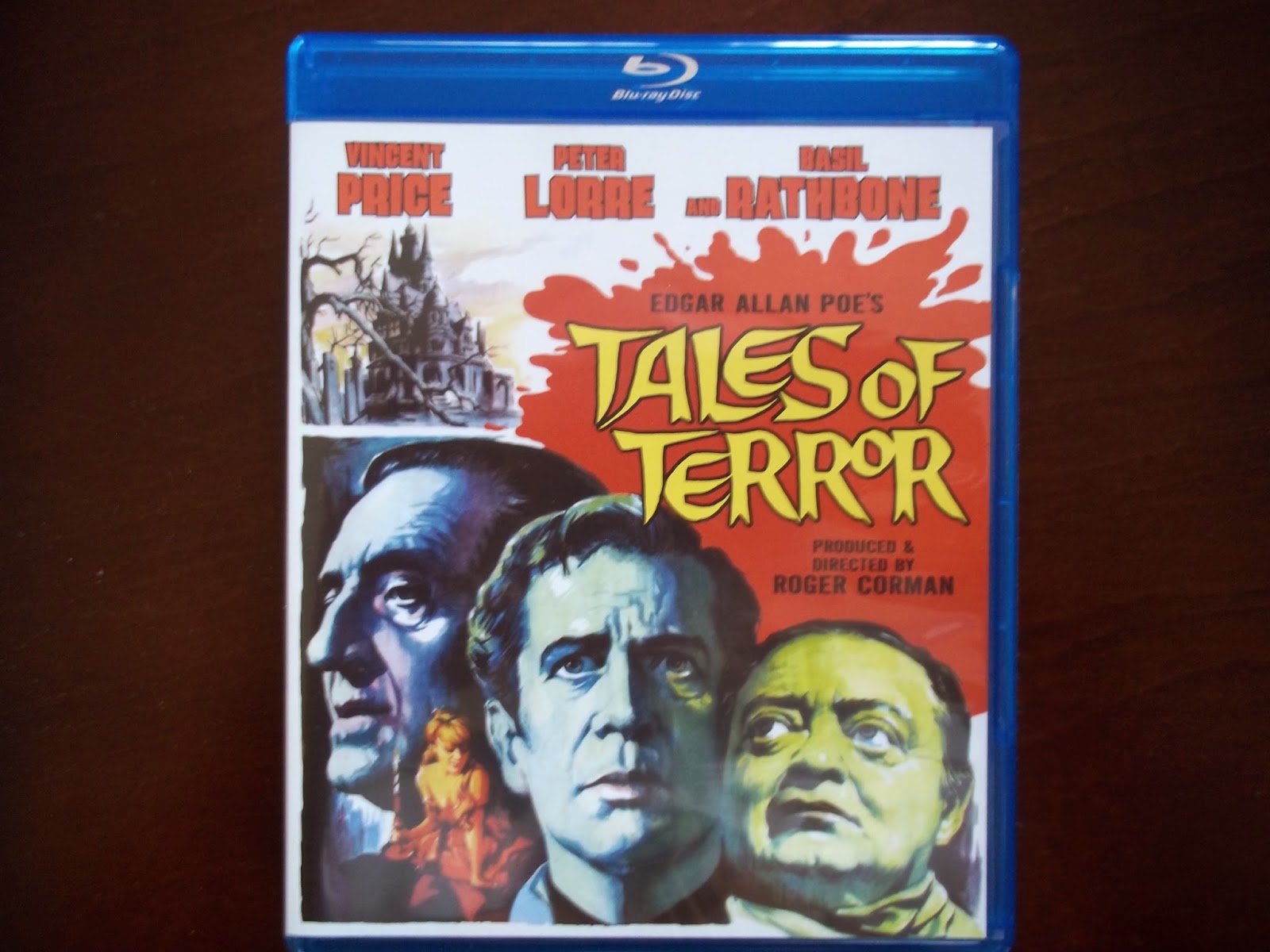 Over the past couple years, Shout Factory has come out with two different Vincent Price Blu-ray sets. Every Roger Corman-directed Edgar Allan Poe movie starring Price has been included in them....except TALES OF TERROR.

Now TALES OF TERROR has been released on Blu-ray by Kino Lorber, and that company will be putting out several other Vincent Price movies later on this year. If Shout Factory is going to put together a third Price set, I don't know what they are going to be able to put in it.

TALES OF TERROR (1962) was the third Poe adaptation that Vincent Price and Roger Corman had worked on together. It was the fourth Poe movie for Corman.....before TALES he had tried to make THE PREMATURE BURIAL outside of American-International Pictures, so he could get more of the profits back.....but AIP bought the film while it was still in production. (THE PREMATURE BURIAL featured Ray Milland instead of Vincent Price.)

The Poe series was already starting to show signs of over-familiarity, so for TALES Corman and writer Richard Matheson tweaked the ingredients a bit. TALES concerns three stories instead of one, and a comic flavor was injected into the middle segment. Two big-name stars were also added to appear along with Vincent Price: Peter Lorre and Basil Rathbone.

The elements of comedy and guest stars would carry over in the next entry in the Poe series, THE RAVEN, which was a full-fledged spoof that added the King of Monsters, Boris Karloff, to join up with Vincent Price and Peter Lorre. Some have suggested that TALES OF TERROR was a turning point in the production of the Poe series--and not in a good way. It must be pointed out, however, that two of the best Price/Corman/Poe films of them all--THE MASQUE OF THE RED DEATH and THE TOMB OF LIGEIA--were still to come.

The first tale in TALES OF TERROR is "Morella". A young woman named Lenora (Maggie Pierce) returns to her New England home after 26 years away to find that her dissolute, reclusive father (Vincent Price) has been keeping the corpse of her mother (who died after giving birth to her) in an upstairs bedroom. "Morella" is the weakest tale in this film, and it is very reminiscent of HOUSE OF USHER. It also anticipates the later THE TOMB OF LIGEIA. Most of the typical Corman/Poe elements are stuffed into this story--Vincent Price playing a brooding recluse, a portrait of a dead woman having importance, and a fiery climax, in which we get to see the "burning barn" footage that would be used again and again in the AIP Poe series. According to the excellent Tim Lucas commentary on this Blu-ray, "Morella" was originally supposed to be the closing story in TALES OF TERROR--it's a good thing it wasn't.

The second tale is "The Black Cat". You could say that this second segment is made up of two Poe tales--the story takes a lot from "The Cask of Amontillado" as well. Drunken lout Montresor Herringbone (Peter Lorre) finds out that his wife Annabel (Joyce Jameson) has been having an affair with the snooty Fortunato Lucresi (Vincent Price). Montresor's solution to this is a little home-improvement project in his basement, but his wife's hated black cat literally gets in the way. The result is a horror-comic gem, with a hilarious off-the-wall performance by Peter Lorre. Price is very funny as well--the actor still doesn't get enough credit for his sense of humor (and as Vincent would readily admit, there's a very thin line between comedy and horror). Price and Lorre's comedy act would be reprised in THE RAVEN and THE COMEDY OF TERRORS.

The final tale is "The Case of M. Valdemar". Dying and in great pain, Mr. Valdemar relies on the ministrations of a creepy hypnotist named Carmichael (Basil Rathbone) to obtain relief from his suffering. Carmichael asks for only one thing in return--a chance to hypnotize Valdemar at the very point of death. The hypnotist does this, but then holds Valdemar in a kind of purgatory.....all so he can claim Valdemar's wife (Debra Paget). This is what I feel is the best tale of the movie, with a deadly serious Basil Rathbone taking the acting honors--you can almost feel the anger coming out of the man (maybe the reason why Rathbone seems so put out here is that he wasn't too happy about working at AIP in the first place). The "voice" of the in-limbo Valdemar is one of the creepiest sound effects of all time ("RRRREEEEELLLLEEAASSSEEE MMMMMEEEEE..."). The ending of "The Case of M. Valdemar" is more than sufficient enough to put a memorable capper on the entire proceedings.

As mentioned before, Tim Lucas from Video Watchdog contributes another one of his masterful audio commentaries. There is also a second commentary on this Blu-ray from David Del Valle and actor David Frankham, who played the David Manners-like role in "The Case of M. Valdemar". This commentary is an informative and fun-filled chat between Del Valle and Frankham, and Del Valle does make two very relevant points, one being that Roger Corman was more a producer than a director, and the other being that despite AIP's reputation of churning out drive-in movies for the youth market, the company gave out major work to numerous older Hollywood legends (Lorre, Rathbone, Karloff, Lon Chaney Jr., Buster Keaton, etc.).

The Blu-ray has a new 10-minute interview with Roger Corman in which he discusses the making of TALES OF TERROR, and a "Trailers From Hell" segment with Corman.

TALES OF TERROR is one of the many classic horror films I first saw as a kid back in the 1980s on TV, and I still have an affection for it. Price, Lorre, and Rathbone are all magnificent, and I can still remember certain lines of dialogue ("It's from the better slopes of the vineyard." "For the love of God, Montresor!!"). Kino has put together a very nice Blu-ray package (the colors really pop on this release), and I'm looking forward to their AIP Blu-rays in the future (although I don't believe my wallet is).