The Movie Scientist Blogathon: Lionel Atwill In THE VAMPIRE BAT 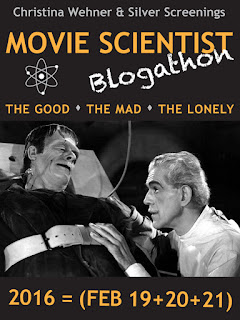 Those wishing to participate in the Movie Scientist Blogathon were given three groups of movie scientists to write about--the good, the mad, and the lonely. Due to my classic horror film leanings I had no choice but to pick the mad--and how could I not write a post about Lionel Atwill, the maddest Hollywood Scientist of them all?

Atwill played a number of mad doctor roles, and he was dementedly glorious in every single one of them. Whenever Atwill was expounding on one of his crackpot theories, or whenever he was threatening a pretty ingenue, the actor's eyes seemed to expand and light up with an unearthly glow. Atwill positively reveled in his mad doctor roles--his dark men of science may have used the excuse that they were trying to help humanity, but there was something more sinister, more personal, behind their unholy doings.

Atwill's first real Mad Scientist role was that of Dr. Von Niemann in the 1933 film THE VAMPIRE BAT. For most of the story Von Niemann is looked upon by the villagers of the Central European town of Kleinschloss as a kindly respected research doctor. But it is Von Niemann who is really responsible for the onslaught of local murders--murders which appear to have been committed by a vampire.

Von Niemann is draining the blood of the victims and using it to feed his "creation", a lump of living tissue. (It has to be admitted that the tissue looks like a sponge lying in a fish tank.) The villagers are convinced that the murders are supernatural, and pin the crimes on local simpleton Herman (played by Dwight Frye--who else?). Young Inspector Karl (Melvyn Douglas)--who happens to be sweet on Von Niemann's pretty assistant Ruth (Fay Wray)--scoffs at the thought of vampiric happenings.

Von Niemann has hypnotic control of another assistant, Emil (Robert Frazer). It is Emil, under the orders of Von Niemann, who kills and takes the victims to the doctor's laboratory. Ruth inadvertently finds out about this, and she is confronted by Von Niemann, in the film's best sequence. 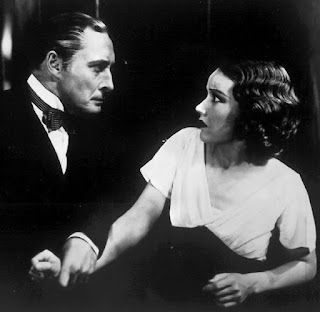 
Von Niemann grabs Ruth's arm and lets rip with some of the greatest mad doctor dialogue ever. "Mad? Is one who has solved the secret of life to be considered mad??"

"Life...created in the laboratory. No mere crystalline growth, but tissue, living growing tissue!"

I can transcribe Atwill's lines, but I cannot recreate the way that he says them--or the trance-like look of orgasmic pleasure on the man's face during this scene. Von Niemann may be angry that Ruth has found out his secret, but at the same time he's exuberant over the fact that he can tell someone what he has accomplished. (Especially that the someone is a attractive female in his power.) What else can Von Niemann do but tie up Ruth to a chair and have her watch his latest experiment? (One gets the feeling that Von Niemann may have wanted to tie up Ruth in any case.) Von Niemann has sent out Emil to kill and bring back Kurt, but the young man turns the tables on them--it is Kurt who brings back a dazed Emil. Von Niemann tries to fight it out with Kurt, but Emil demands that the doctor be left to him--so Kurt leaves with Ruth, while Emil and Von Niemann kill each other off-screen, in a rather limp climax.

For most of its running time, THE VAMPIRE BAT is set up in the same manner as the Universal horrors of the same period. The movie's art director was Charles D. Hall, who worked on several of the Universal monster entries, and Lionel Blemore plays the same type of Burgomaster as he did in the 1931 FRANKENSTEIN. Dwight Frye's Herman is of course a variation on his Fritz and Renfield roles for Universal, and when the torch-wielding villagers chase after Herman, you can't help but be reminded of James Whale's work.

Where THE VAMPIRE BAT differs from the Universal thrillers of the period is that the supposed un-dead occurrences are all a feint--but if anything, the revelation of Von Niemann's activities makes the movie even wilder than its contemporaries. THE VAMPIRE BAT was produced by an independent low-budget studio called Majestic, and one wonders how truly great the movie might have been if it had a major studio budget.

Melvyn Douglas brings some much needed dry humor to the "David Manners" role, even though I'm sure an actor of his standing probably didn't think very much of it. (Remember that Douglas too, had been in a Universal horror--James Whale's THE OLD DARK HOUSE.) Maude Eburne, as Ruth's Aunt Gussie, is incredibly annoying as the comic relief (one wishes that Von Niemann had gotten rid of her).

It doesn't need to be said that Fay Wray is one of the greatest screen scream queens of all. Her collaborations with Lionel Atwill--DOCTOR X, THE MYSTERY OF THE WAX MUSEUM, and THE VAMPIRE BAT, are legendary in the annals of classic movie horror. Whenever Wray was asked about the actor in interviews, she didn't appear all that impressed with Atwill, but the fact remains that the two will forever be associated with each other in the minds of movie buffs. The really didn't share all that much screen time together, but Wray was Atwill's most famous "partner". Wray's innocent screen persona contrasted well with the dubious nature of Atwill's characters--no one could leer at a woman the way Atwill could. The differences in the ages of Atwill and Wray also helped the contrast. There was just something unseemly about Atwill's feelings for Wray when they appeared in a movie together--even in DOCTOR X, when they played father and daughter!

THE VAMPIRE BAT is in the public domain, and can easily be accessed on YouTube. When the VHS boom hit in the 1980s, you could find cheap tapes of THE VAMPIRE BAT almost everywhere. It would be nice if someone like Kino came out with a remastered and restored version of this film--I've never seen a copy of it that looks good. The Alpha DVD I have of it appears too dark during several scenes, and there's a question of how long the movie is supposed to be--there are several different running times listed. Nevertheless it is an important title for monster movie fans, just for the fact that it is the very first time the maddest doctor of them all plays an actual mad doctor.

Lionel Atwill would go on to carve a very fine career as an accomplished Hollywood character actor in many acclaimed films. But his reputation today rests mainly in the horror thrillers he starred in. Atwill would go on to play even madder doctors than Von Niemann, in such movies as THE SUN NEVER SETS, MAN MADE MONSTER, and THE GHOST OF FRANKENSTEIN. But his role in THE VAMPIRE BAT set the template for a career in thrillers that still entertains audiences to this day. There have been many extraordinary Mad Scientists in movie history--Boris Karloff, Bela Lugosi, George Zucco, John Carradine--but in my opinion Lionel Atwill was the truly maddest of them all, the one man that is the ultimate representation of everything a movie Mad Scientist is supposed to be--over-the-top, nutty, dangerous, perverted, and devilishly brilliant.