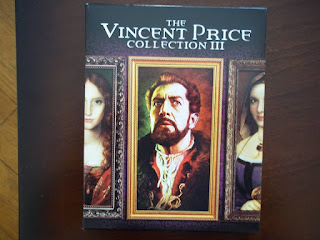 Shout Factory has come out with a follow-up to their first two well-regarded Vincent Price Blu-ray sets. It's a bit surprising that there is a VINCENT PRICE COLLECTION III, simply because so many Price movie titles have been released in the last year or so by Kino. None of the movies on this set are what I would call "must haves", but as usual Shout Factory gives each disc enough bells & whistles to make this set a worthy purchase for hard-core classic horror fans.

The set has four discs in all. Disc One features MASTER OF THE WORLD, a personal favorite of mine. MASTER OF THE WORLD is based on two Jules Verne novels about a Nemo-of-the-skies called Robur, who has built a magnificent aerial ship in the late 19th Century. Vincent Price brings a determined panache to the role of Robur, and if you have a lot of imagination and are willing to lose yourself in the story, the movie is entertaining fun. Unfortunately American-International didn't have the budget to truly do justice to Verne's vision. Viewers used to CGI-fueled spectacle might be disappointed by the special effects. (I think anyone watching this movie will have to admit that the model of Robur's airship, The Albatross, is quite impressive.) The story's hero is played by Charles Bronson! (No, he doesn't shoot Vincent Price.) The extras include an engaging audio commentary by actor David Frankham, who tells all sorts of great stories about what filming MASTER OF THE WORLD was like. There's a 72 minute interview with writer Richard Matheson, who talks about almost every movie he scripted for American-International, including MASTER OF THE WORLD. A photo gallery is provided, with pictures from David Frankham's personal collection. MASTER OF THE WORLD does not look as sharp as the rest of the films on this set, but that is probably due to the many matte effects used in the movie.

Disc Two contains the 1962 version of TOWER OF LONDON. Roger Corman directed this film for Admiral Pictures, with the company hoping to recreate the success Corman and Vincent Price had with their Poe team-ups. In Universal's 1939 version of TOWER OF LONDON, Price played the Duke of Clarence; here, he gets promoted to the lead role of Richard III. Price really lets it rip in this one--the movie's only about five minutes old when he starts killing people, and it's only a few minutes later that his Richard is ranting and raving. Maybe it's just as well that Price is so overwrought, because everything else about the production is rather lackluster. This is a film that appears to have been made in 1952 instead of 1962. The extras feature interviews with Roger Corman and his brother Gene (who was this film's producer), two episodes of the 1950s TV series SCIENCE FICTION THEATER which starred Price, and a photo gallery. The black & white TOWER looks sharp as a knife on Blu-ray.

Disc Three has DIARY OF A MADMAN, another production from Admiral Pictures. This tale, based on two stories written by Guy de Maupassant, has Price as a late 19th Century Parisian magistrate who is taken over by an evil being known as the Horla. The synopsis sounds promising, but producer-writer Robert Kent and director Reginald Le Borg fashion a lukewarm result out of it. The movie looks and feels like a typical episode from 1960s American television, and the only vitality that comes from it is brought by the gorgeous Nancy Kovack, who plays a conniving model that catches Price's eye. There's an audio commentary from Steve Haberman, and a photo gallery. This movie (which is in color) looks very fine on this Blu-ray.

Also on Disc Three is an hour long TV special called AN EVENING OF EDGAR ALLAN POE. The special was shot on videotape in 1970, and has Price acting out four different Poe tales, all by himself. Price was quoted as saying that this was one of the best things he ever did, and he does give a spectacular overall performance. The special was the idea of Kenneth Johnson (who was also the man behind the popular V TV mini-series), and he gives an interesting interview about how the show came about, and how it was produced. The special is not in HD--it is in full-frame video, but that shouldn't detract from Price's ultimate presentation of Poe.

Disc Four contains two different versions of the 1970 American-International film CRY OF THE BANSHEE. One version is Gordon Hessler's director's cut, which runs about 91 minutes. The other is AIP's theatrical cut of the film, which runs 87 minutes. (If you really want to know all the differences between the two versions, read Tim Lucas' article on the subject in issue #98 of VIDEO WATCHDOG magazine.) Each cut has different title sequences, and each cut has a different music score (the AIP cut features a very below-average score from Les Baxter). CRY OF THE BANSHEE is set in 16th Century England, and it tries to be a take-off of WITCHFINDER GENERAL (with a little bit of THE MASQUE OF THE RED DEATH thrown in). Instead of being thrilling or frightening, the movie is just unpleasant--in the first fifteen minutes of the director's cut, three different women are violently abused and have their breasts exposed. Price, as Lord Edward, is the head of the brutal Whitman family--a family so repellent that the viewer doesn't really care about what happens to them. The only character in the story that engages the audience in any way is the exquisite Hilary Dwyer as Price's daughter. The story is convoluted no matter what version of it you watch. Steve Haberman contributes an audio commentary, and there's an interview with director Gordon Hessler that originally appeared on the "Midnite Movies" DVD of this title. The director's cut looks a little bit better than the AIP version, but both are fine visually.


This set comes with a 12-page booklet featuring many of the stills used in the photo galleries.

All the movies on this set have been released on DVD before, and some of the extras have been on those DVDs as well. I would say that this set is more for the super Vincent Price fan, or the major geek film buff. The titles here are underwhelming, but Shout Factory has gone out of their way to still make the set palatable. I pre-ordered this from Amazon and my final price averaged out to about $12 per disc. I wouldn't call this set a must buy, like the first Price set...but if you have any interest in it chances are you'll probably get it anyway. I doubt that there will be a VINCENT PRICE COLLECTION IV--I mean, what else is left?? But then again, I didn't expect that there was going to be a VINCENT PRICE COLLECTION III.
Posted by Dan Day, Jr. at 3:25 PM