SPEEDY At The Indianapolis Museum Of Art 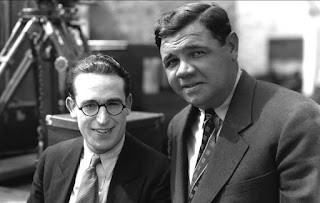 On Friday, March 4, I had the pleasure of attending a screening of the 1928 silent comedy SPEEDY, featuring Harold Lloyd. SPEEDY was Lloyd's last silent film, and while it is not as well known as other Lloyd classics such as SAFETY LAST or THE FRESHMAN, it remains one of the best comedies from that period.

The screening was held at the Indianapolis Museum of Art, and the Indianapolis Chamber Orchestra provided the music. I've seen silent films with organ accompaniment, and I've seen silent films with piano accompaniment, but I've never seen a silent with live music from a 34-piece orchestra. The effect was tremendous, especially since the ICO was playing the Carl Davis score specifically written for SPEEDY. The orchestra also provided various sound effects during the running of the film.

Playing a live musical score for a silent picture has to be a major challenge--the score must be perfectly timed to what is happening on the screen. Any lull or change in tempo will be picked up immediately by the audience. The ICO did a fantastic job--the combination of music and picture was seamless.

What also made the evening even more special was the fact that the large number of attendees enjoyed the film immensely, and laughed loudly at its many gags. SPEEDY provides a lot of entertainment, with such sequences as Harold (attempting to be a taxi driver) frantically driving Babe Ruth to Yankee Stadium, and Harold taking his girlfriend out to the actual Coney Island. The final sequence, which involves Harold trying to save the last horse-drawn trolley in New York City, is as thrilling and as tightly edited as any recent movie being shown on screens today.

Seeing any silent movie on a big screen, with a large audience, is a treat in itself....but seeing a great film like SPEEDY, starring one of the true legends of film comedy, with a live orchestra, is something that every true film buff should experience if they get the chance.
Posted by Dan Day, Jr. at 1:03 PM