40 Things I Love About STAR WARS 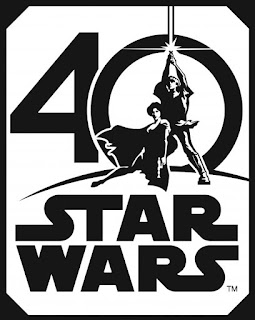 In honor of the 40th Anniversary of the original STAR WARS, here are 40 things I love about the movie. These are listed in no particular order, except for No. 1.

40. The way everyone pronounces Alderaan a different way--it's either Alder-RON or Alder-RAN.
39. The R2 unit decked out in New York Jets colors that we saw at the Rebel Base on the Yavin moon.
38. The three drunk Jawas sitting out in front of the Mos Eisley cantina.
37. "THANK THE MAKER!! THIS OIL BATH IS GOING TO FEEL SO GOOD!!"
36. The opening sequence. Still gives me chills every time I see that Star Destroyer fly over.
35. The sound of the lightsabers.
34. The fact that Han shot first.
33. Carrie Fisher's attempt at a English accent during certain parts of the film.
32. The Millennium Falcon.
31. How whiny Luke sounds throughout the movie.
30. Darth Vader's personal TIE fighter.
29. "That's no moon....it's a space station."
28. The way our heroes are totally dry about a minute after getting out of the trash compactor.
27. Every single note of John Williams' score.
26. "Evacuate!!?? In our moment of triumph!!??"
25. Hyperspace.
24. Gaffi sticks.
23. "When I left you, I was but the learner. Now I am the master."
22. A long time ago in a galaxy far, far away...
21. Vader putting Admiral Motti in his place.
20. The end credits font.
19. The fact that Darth Vader wears a cape, even though it is totally unnecessary.
18. The two stormtroopers bull%^&*$#@+ while Obi-Wan is turning off the tractor beam.
17. Porkins....never forget his sacrifice.
16. There's about a thousand stormtroopers in this movie, and 99% of them are basically useless.
15. The uniform of the TIE fighter pilots.
14. "Boring conversation anyway..."
13. The Imperial Star Destroyer.
12. The idea that, in this movie at least, there is sound in space.
11. "Aren't you a little short for a stormtrooper??"
10. The way Han rolls his eyes when he first meets C-3PO.
9. The way Alec Guinness pauses when Luke asks him, "How did my father die?"
8. "These aren't the droids you're looking for."
7. Every member of the Empire is an arrogant white guy.
6. The seats the Rebel pilots are sitting in during the briefing on how to destroy the Death Star look as if they come from a junior high school.
5. Princess Leia's lip gloss.
4. Gold Leader's speaking pattern.
3. The scene where Luke stares out at the twin suns of Tatooine.
2. The fact that I have contributed immensely to George Lucas' personal fortune.
1. And the No.1 thing I love about STAR WARS is....I love EVERYTHING about STAR WARS!
Posted by Dan Day, Jr. at 12:24 PM