THE VAMPIRE BAT--Looking Better Than Ever On Blu-ray 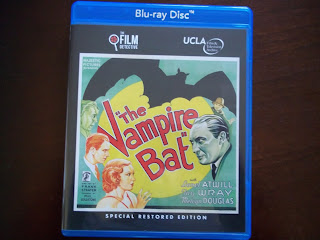 THE VAMPIRE BAT (1933) has long been a staple of public domain home video. The fact that it features stars such as Lionel Atwill, Fay Wray, Melvyn Douglas, and Dwight Frye has given several fly-by-night companies the incentive to slap a copy of it onto a videotape or a disc. Those cheap versions are now rendered obsolete by a new Blu-ray of the movie from The Film Detective, restored from 35mm elements preserved by the UCLA Film & Television Archive.

Saying "it's like seeing it for the very first time" may seem like hyperbole, but in this case it is true. This presentation of THE VAMPIRE BAT blows away anything else available. The picture is sharper and more defined, and the black & white contrast is excellent. This Blu-ray isn't 100% visually perfect--this is a 80+ year old movie, after all--but that's alright, because it does not have the overly processed look of some restored older titles. The sound quality is also improved slightly. During the part of the story where Dwight Frye's creepy Herman is chased by torch-wielding villagers, the torches have been tinted a fiery orange (apparently this was done on some prints of THE VAMPIRE BAT in 1933). It is an intriguing, eerie effect, and at least there is some historical justification for it.

Watching this Blu-ray gave me a better appreciation for director Frank Strayer's camera set-ups. The movie still has a low-budget sensibility to it--it was produced by a company called Majestic instead of a major Hollywood studio--but it plays a bit better in this restored print. The improved visuals still do not cover up some plot problems. Even though the movie is only 63 minutes long, it's not until the very end that Lionel Atwill and Fay Wray are allowed to go into full-blown mad doctor and scream queen mode. Most of the film follows Dwight Frye's red herring Herman ("BATS...SOFT!"), and Maude Eburne, who plays Fay Wray's comic relief spinster Aunt, gets way too much screen time. (If you're the type of film buff who is annoyed by Una O'Connor, Maude Eburne will really drive you nuts.) Most old monster movie fans tend to overlook the flaws of THE VAMPIRE BAT and look upon it fondly, probably because they are so familiar with it. (If you'd like to read more about my thoughts on the film, please check out my February 2016 blog post for "The Mad Scientist Blogathon", in which I wrote about Lionel Atwill's performance.)

I have to point out that this Blu-ray disc is Made-On-Demand, instead of a regularly pressed one. (I experienced no playback problems with my copy.) The back cover of the disc package says that this Blu-ray is Region Free. The Film Detective has provided two bonus features, one of them being a very short interview with Gregory Hesselberg, the son of Melvyn Douglas. The other is an audio commentary by cult independent film producer Sam Sherman. Sherman proves that he is a knowledgeable film buff, and he does offer up a few interesting nuggets of info, but his talk is very rambling, and it strays away from the movie several times. A Greg Mank or a Tom Weaver would have been better. Ironically, Weaver himself recently posted on the Classic Horror Film Board that it wouldn't have been worth featuring either Mank or him on this Blu-ray, because there's isn't anything new that can be said about THE VAMPIRE BAT. Personally, I think Mank or Weaver could have easily spent 63 minutes successfully discussing the film.

THE VAMPIRE BAT isn't on the level of most of the Universal Monster Classics made during the same time period, but the cast and subject matter make it worthwhile viewing for those who are fans of retro horror films. The main treat of this Blu-ray is seeing it in a fine, restored print.