THE HOUSE THAT DRIPPED BLOOD On Blu-ray From Shout Factory 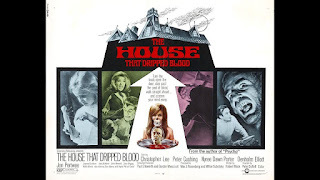 The 1970 horror anthology film THE HOUSE THAT DRIPPED BLOOD is my favorite Amicus film of all time. There are several reasons for this. The top reason is the main cast: Peter Cushing, Christopher Lee, Ingrid Pitt (looking as luscious as ever), and Jon Pertwee, who also happens to be my favorite Doctor Who. There's also the fact that I saw it for the very first time on the "Son of Svengoolie" show back in the mid-1980s. And it helps that out of the four tales presented in the movie, there's not a weak one in the bunch. Shout Factory, through its Scream Factory label, has released THE HOUSE THAT DRIPPED BLOOD on Blu-ray with some choice extras, making it one of the best home video presentations so far this year.

In many of the other Amicus anthology films, the tales basically existed for their trick endings. Here director Peter Duffell brings some nuance to each story, taking the time to inject characterization and atmosphere. This was the first time that Duffell had directed a feature-length theatrical film (he had spent a number of years in British television), and one wishes he had done other genre entries. Duffell seemed to have avoided the usual interference from producer Milton Subotsky, but he couldn't stop co-producer Max Rosenberg from giving the movie its now-infamous title. The title is over the top--one doesn't see a single drop of blood in the entire film--but it is a memorable one (even people that don't like horror movies recognize it).

The four tales in the film were adapted by Robert Bloch from his own stories. The first tale concerns a writer (Denholm Elliott) who believes that his latest creation has come to life. The next features Peter Cushing as a lonely middle-aged bachelor who is painfully reminded of a lost love when he visits a nearby wax museum. The third tale revolves around uptight businessman Christopher Lee and why he is afraid of his very young and seemingly angelic daughter (Chloe Franks). The final story features Jon Pertwee as low budget horror film star Paul Henderson, whose quest for Gothic authenticity leads him to purchase a mysterious cloak. Ingrid Pitt is his co-star (in more ways than one). The wraparound tale that links all the stories together has a cynical police inspector investigating the disappearance of Paul Henderson and all the other strange occurrences that have happened to those that have rented the "House" of the main title.

All of the tales are at least above-average, with the Christopher Lee segment one of the best Amicus anthology tales of them all. The Jon Pertwee story has a humorous bent to it, which might annoy some--but it is a nice change of pace, and it is filled with all sorts of classic horror movie in-jokes.

THE HOUSE THAT DRIPPED BLOOD looks fantastic on this Blu-ray--the print is full of detail and very colorful. I think it's better looking than any of the movies that were included in the Severin Amicus box set which came out earlier this year.

This Blu-ray features two very fine commentaries. The one with Troy Howarth is brand new, and it's one of his best--enthusiastic, analytical, and informative. The other talk features British horror film expert Jonathan Rigby and director Peter Duffell. The duo go over every aspect of the production, and thankfully Duffell has an excellent memory. The other extras include a very short interview with Mike Higgins, who was second assistant director on the film, and a vintage featurette in which Peter Duffell, Ingrid Pitt, and Chloe Franks appear. There's an extensive image gallery, and a series of radio ads for THE HOUSE THAT DRIPPED BLOOD and other Amicus films (some of these ads have to be heard to be believed).

Despite its being set in contemporary times, THE HOUSE THAT DRIPPED BLOOD remains one of the best English Gothic films made during the late Sixties-early Seventies. It has been released on home video many times before, but this Blu-ray from Shout Factory is a very welcome upgrade.