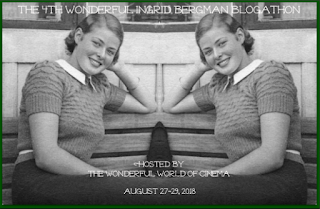 For this annual Ingrid Bergman blogathon, which I've taken part in the last few years, I've chosen to cover the 1943 film FOR WHOM THE BELL TOLLS, which was released on Region A Blu-ray by Universal a few months back. Ingrid Bergman was nominated for a Best Actress Academy Award due to her performance as Maria, a young guerrilla fighter during the Spanish Civil War.

FOR WHOM THE BELL TOLLS was as high concept as you could get for early 1940s Hollywood. It was based on the already famous novel by Ernest Hemingway, and it was produced and directed by Sam Wood, who at the time was one of the most important filmmakers in the industry. Esteemed production designer William Cameron Menzies was part of the project as well. The leading man was to be Gary Cooper, and most of the film was to be shot on location near Sonora, California. (Shooting the film in Spain was in impossibility of course due to the Franco regime and WWII.) The movie was made in Technicolor and after a long shooting schedule was released by Paramount in 1943.

When filming on FOR WHOM THE BELL TOLLS began in late 1941 Bergman was not yet attached to the project, despite rumors that she would be cast. The production shut down after Pearl Harbor was attacked, and when filming resumed in July, 1942, Vera Zorina was cast in the role of Maria. Sam Wood was reportedly not happy with her, and soon Bergman was brought on to replace her.

The character of Maria is a teenage girl who has been mentally and physically traumatized by events she has experienced during the Spanish Civil War. She has seen her parents killed in front of her, she has had her head shaved, and even though it is not specifically stated in the film, it is obvious she has been sexually assaulted as well. Bergman is superb at conveying Maria's fragile emotional state--she is constantly shy and hesitant, only opening up to Gary Cooper's Robert Jordan, an American who is helping the band of guerrilla fighters the girl is with. Bergman's Maria is overwhelmed by the handsome older man, and she becomes infatuated with him. Jordan is taken by Maria as well, and much of their scenes together consist of them staring longingly at one another in close-up. Gary Cooper and Ingrid Bergman were two of the best-looking people in the world at the time, so you can't blame Sam Wood and William Cameron Menzies (who was just as responsible for the shot selections as the director was) for taking advantage of that fact. In fact much of this long film is made up of gripping close-ups of the characters, rare for an epic production like this made on mostly outdoor locations.

The recent Blu-ray of FOR WHOM THE BELL TOLLS uses a excellent transfer of the film, which shows off the work of Menzies and cinematographer Ray Rennahan very well. Color, shadows, and silhouettes are used throughout the story to heighten the emotional intensity. The sharpness of the Blu-ray brings all this out in considerable detail--but it also makes the various actors who play the members of the guerrilla band appear as if they are wearing multiple layers of fake tan. This effect is more pronounced when Bergman is among them in a scene. Bergman's natural Nordic beauty makes her stick out from the other characters like a sore thumb. The actress was not given any special makeup to appear Spanish (unless you count her short haircut, which still gives her enough length so as not to come off as distracting). Certainly no one was going to inhibit Ingrid Bergman's looks. But I have to admit that Bergman doesn't look to me like a Spanish teenager who has undergone serious travails. I'm not saying this as a knock on her performance--it's to her credit that Maria comes off as believable and appealing. A less talented actress than Bergman might have come off as ridiculous.

Gary Cooper is fine as well in a role that was basically written for him by his friend Ernest Hemingway--a typical Cooper role, the soft-spoken man who has high principles and does what has to be done no matter what the circumstances. (It must also be pointed out that Cooper here is dressed almost exactly the same as Harrison Ford would be when he played Indiana Jones some 40 years later.) The true standout performances in the picture, however, are by Katina Paxinou and Akim Tamiroff as Pilar and Pablo, the married couple who lead the guerrilla band. Paxinou makes the earthy Pilar out to be tougher than anyone else in the cast, and Tamiroff's treacherous and jealous Pablo is the most interesting character in the cast. Cooper, Paxinou, and Tamiroff were all, like Bergman, nominated for Academy Awards for their performances in FOR WHOM THE BELL TOLLS (Paxinou was the only winner, for Best Supporting Actress). The movie received nine Academy Award nominations in all, including one for Best Picture. It also was one of the biggest box office successes of 1943. 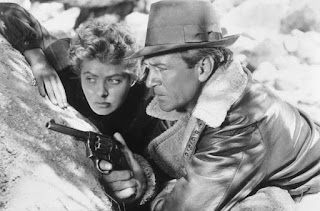 Ingrid Bergman and Gary Cooper in FOR WHOM THE BELL TOLLS

Despite the movie's critical and financial success, it seems to me that FOR WHOM THE BELL TOLLS doesn't have the same popularity now as most of Ingrid Bergman's other major movies from the same period. It very rarely gets shown on TV, and it isn't discussed with as much frequency as, say, other Bergman films as CASABLANCA or GASLIGHT. It may be due to the movie's excessive length--the restored running time on the Blu-ray is almost three hours. It may also be that the Spanish Civil War is a subject that doesn't resonate with a number of people today, especially Americans (I certainly know very little about the subject). The movie falls in between being a historic war action-adventure picture and a romantic melodrama. While the recent Blu-ray of FOR WHOM THE BELL TOLLS looks fantastic, it has absolutely no extras--and that's a shame. It sorely needs audio commentaries and featurettes to explain the production difficulties the film went through and to adequately provide insight into Hemingway's novel and the conflict the story is set against. FOR WHOM THE BELL TOLLS really deserves the Criterion treatment.

I would still recommend the recent Blu-ray. This film is a prime example of classic large-scale Hollywood film making, and Ingrid Bergman is the recipient of some of the most exquisite close-ups in cinema history.
Posted by Dan Day, Jr. at 11:43 AM