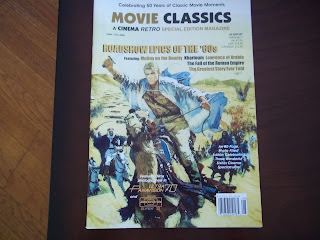 The fantastic movie magazine CINEMA RETRO has come out with another magnificent special issue. This one covers five big-budget historical epics made and released in the 1960s--LAWRENCE OF ARABIA, the 1962 version of MUTINY ON THE BOUNTY, THE FALL OF THE ROMAN EMPIRE, THE GREATEST STORY EVER TOLD, and KHARTOUM. All of these films were photographed in 70mm--a format that is all but extinct today.

The issue is 80 pages long, and it extensively covers and analyzes each production. It is also filled to the brim with photos, stills, and advertising art from the movies. If I had any quibble with this, it is that many of the photos are not large enough to take in properly--but I'm sure that if all the pictures were reproduced in a larger size the issue would have to be at least twice as big and twice as expensive.

I own three of the films covered on home video. LAWRENCE OF ARABIA is one of the greatest movies ever made, and one wonders what more can be said about it--but this issue still makes it seem fresh and exciting. THE FALL OF THE ROMAN EMPIRE is a very underrated epic that needs more attention--it is basically a more sedate version of GLADIATOR. KHARTOUM is also very underrated, and like the other two films I have just mentioned has a momentous cast.

MGM's 1962 remake of MUTINY ON THE BOUNTY is a film I have only seen parts of--from what I did see I wasn't too impressed with it. This issue tries to make the case that it is better than its reputation has led some to believe. THE GREATEST STORY EVER TOLD is George Stevens' mammoth attempt to recreate the life of Christ--at the time it was released it was the most expensive American film ever made. Out of all the films in this issue THE GREATEST STORY EVER TOLD is the one that has the least critical or popular acclaim, and CINEMA RETRO does not shy away from that.

Some folks are annoyed by the phrase "They don't make 'em like this anymore", because it suggests that classic film making is always better than that of the present day--but it accurately describes the movies showcased in this special issue. The time, money and talent invested in these productions--particularly productions that have these types of subjects--would not be invested the same way today. This style of movie-making truly is a lost art, and thankfully CINEMA RETRO goes out of its way to celebrate it.