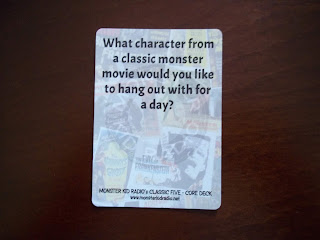 Now, here's a question that seems relatively simple, but is actually quite complicated. My immediate response would be, "I'd like to spend time with one of the Hammer heroines!" The thing is, I basically did that for real on the set of HOUSE OF THE GORGON earlier this year. But the question isn't about which classic monster movie performer you'd like to hang out with..it's which classic monster movie character.

And that's where it gets complicated, because, when you think about it, how many great classic monster movie characters are the type of people one would want to spend time with off the screen?? Can you honestly imagine hanging out with, say, Bela Lugosi's Dr. Vollin, or Peter Lorre's Dr. Gogol? I highly doubt those chaps would be all that much fun to be around. It's always entertaining to watch the mad scientists played by the likes of Lionel Atwill or George Zucco....but to spend time with those characters for real would be highly dangerous.

Okay...instead of picking a mad scientist type, what about a classic monster movie good guy? What about, say, Robert Armstrong's Carl Denham? No doubt you'd have an exciting time with him...but you'd also run the risk of sacrificing yourself for whatever crazy scheme he'd have cooked up. If you hung out with one of David Manners' characters, you'd probably wind up bored to death. Lionel Atwill's Inspector Krogh from SON OF FRANKENSTEIN might seem a safe choice...but you'd spend a lot of time stifling laughter over his one-armed antics.

One of Kenneth Tobey's monster fighting characters might make pleasant company....then again, maybe not, considering that most of them were highly professional military men who didn't seem all that comfortable with down time. Peter Cushing's Dr. Van Helsing might seem the obvious choice for me--but remember what happened to his "close friend" Jonathan Harker in HORROR OF DRACULA?

How about a female character instead of a male one? Fay Wray's characters would spend a lot of time screaming at you, and Evelyn Ankers' characters, well...I have the feeling they'd be a bit high maintenance. As for the English Gothic female characters, most of them have rather questionable taste in men, such as Veronica Carlson's Maria in DRACULA HAS RISEN FROM THE GRAVE.

Instead of picking one of the stars of a classic monster movie, and dealing with all the trouble that entails, how about a supporting character? There's plenty of issues when you go down that route as well. Could you imagine dealing with, say, Una O'Connor's Mrs. Hall for any length of time?? Or any member of the Femm family from THE OLD DARK HOUSE?

Maybe the safest bet is to pick a background character, someone who is out of the way and observing everything going on around them. Maybe one of the villagers in a typical Universal or Hammer horror film. If you did that you'd find yourself spending a lot of time at the local tavern or pub instead of working for a living, and every so often you'd have to grab a torch and join up with a righteous mob. (Come to think of it, there's plenty of 21st Century Americans who live that type of lifestyle....)

One also has to consider where most classic horror film characters live--old dark houses, subterranean hideouts, caves, sewers, dungeons, crypts, etc. If you are one of those "Halloween every day" type of people, this might be okay, but others might want to ask their favorite classic horror film character if they'd like to head out to the mall for the afternoon instead.

We are, though, only talking about one day....surely one can handle certain difficulties over that time? How would you like to deal with Lon Chaney Jr's Lawrence Talbot whining and moaning for 24 hours? (He even drove Boris Karloff's Dr. Niemann to anger over it.)

Fact is, when you get right down to it, there's very few classic horror film characters (in my opinion at least) that one would seriously enjoy spending an entire day with. It's not like most of them would sit on the couch with you and eat junk food and watch the game on your big-screen TV.

For me, the classic horror characters are best experienced through their various films. But if I had to pick one, it would be Peter Cushing's Dr. Van Helsing. If things got really bad, Van Helsing could take care of the vampires, and I'd keep an eye on the ladies.