Making The Case For Physical Media 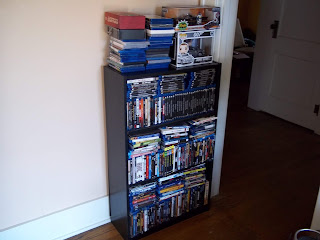 Ever since the 21st Century began I've been hearing about how physical media--DVDs, Blu-rays, CDs, books, magazines, etc.--is on the way out. You wouldn't know that if you visited my house. I have five different shelves filled with various discs, and I've got books piled up all over the place, including boxes of them (and numerous magazines) in my basement.

I've spent a great deal of my hard-earned money on physical media (and it's not like a make a lot of money either). Many people have told me, "You don't need to buy all that stuff now! Just stream it, or watch and read it on the internet!" Well, I love collecting this stuff, it's one of my hobbies. Not that long ago I wrote a blog post on my very first home video purchase, a cheap public domain VHS version of HORROR EXPRESS. In that post I related how cool it was to actually own a Peter Cushing/Christopher Lee film--it was if I now had a personal connection to it. I still feel that way when I get a super-duper release from Criterion or Arrow today. You can psychoanalyze that feeling all you want--some people get that feeling from buying clothes, or working on cars...I get it from buying an obscure monster movie that very few have ever heard of. To each his own.

One of the great things about physical media is that once you've bought it, it's yours. You don't have to worry about the copyright being an issue, or what happens if your power source is interrupted, or your device being damaged or going on the fritz. No one is going to take away your physical media, unless they break into your residence and steal it. You can watch it (or read it) whenever you feel like.

I realize that some feel they may not have the room to keep or store many items on physical media, but I don't think these things take up that much room--that basically comes down to each individual's preference. In my situation it helps that I'm a single guy, and I can do what I want in my own house.

As for the "You can find cheaper and better ways to get this stuff than buying an actual copy", is it more efficient to use streaming or Kindle when most of the product available on those devices are things I'm not interested in? I've been encouraged to try services like Netflix just so I can watch one particular show--then why not just go and buy that show on home video? Most streaming services have very few choices of interest for hardcore film buffs. There are thousands and thousands of films that will never show up on any streaming service, simply because they will be considered too old or not mainstream enough.

When it comes to books, for me there's no comparison between reading something on a screen and actually holding a copy in your own hands and reading it page by page. Whenever I read something on a screen I have a tendency to skim through it--that's a bad habit, and it's one reason why I try to keep my blog posts short and to the point. There's nothing more relaxing for me than to read a good book on a subject I'm interested in. Reading that same material on a screen....it just wouldn't be the same. Maybe that's a silly way to look at it, but it's how I feel. 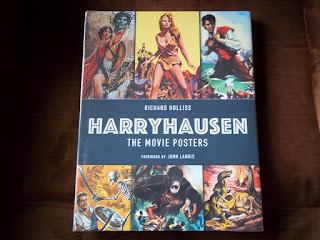 Maybe I can explain my love for actual books in another way. I recently purchased a book featuring posters for the films that involved Ray Harryhausen. It is a magnificent volume, with all sorts of wonderful and imaginative poster art. Could one get the same satisfaction from this book if you viewed it from a hand-held device? I certainly wouldn't.

Speaking of hand-held devices, I realize now that plenty of folks watch movies on them. I've viewed films on YouTube with my laptop....but watching an entire feature film--in widescreen yet--on a cell phone?? Can you imagine watching LAWRENCE OF ARABIA or THE GOOD, THE BAD, AND THE UGLY on a hand-held device?? I know someone reading this is probably thinking, "That's what the kids do nowadays." Okay, fine, whatever....but I really don't see how you can properly appreciate any film that way.

One time when my Dad was staying with me for a couple days, he told me, "If you hadn't bought all this stuff you have, you'd be a millionaire!!" (He was also referring to the sports memorabilia that I own). The thing is, if I hadn't bought all of this stuff, I'm sure I would have spent it on other things. We all have something that gets us through life. Some people medicate themselves through alcohol or drugs--I do it with movies and books. One of the reasons I'm able to spend money on the things I have is the fact that I don't drink or do any type of drugs. I've never even smoked dope. I'm not saying this to assert some sort of moral superiority, I'm just stating it to point out that if one wants to follow certain interests in life, one has to make certain choices to be able to do so. I've made my choices and I'm happy with them. Whenever my friend Josh Kennedy and I discuss the latest crazy movie-related purchase one of us has made, we always come to the same conclusion--"There are far worse things we could be spending our money on."

The fact is, if you have any interest in entertainment that goes beyond the mainstream, you are going to have to invest in some form of physical media. It may be a hassle at times to do this, but if it makes you happy in the end, that's all that matters. I would much rather watch movies or read books I have an interest in than deal with most people, so for me, physical media will always be the way to go.
Posted by Dan Day, Jr. at 12:17 PM