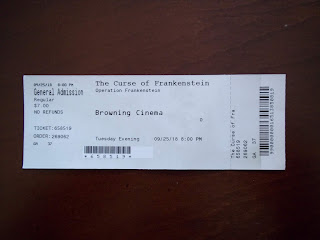 This fall the University of Notre Dame is hosting a series called "Operation Frankenstein", in which a number of events will be helda to commemorate the 200th anniversary of Mary Shelley's famed novel. As part of the series, a number of Frankenstein films are being screened at the Browning Cinema, located on campus at the DeBartolo Performing Arts Center.

Last night the Browning featured a digital presentation of THE CURSE OF FRANKENSTEIN. I never thought I'd get the chance to see any Hammer film at Notre Dame, let alone this one...so obviously I attended.

Just about all of my Hammer viewings have been on some sort of television screen, so seeing one of them at any theater period is a real treat. If you've read only a few of my blog posts, I'm sure you know something about THE CURSE OF FRANKENSTEIN. First Hammer color Gothic horror...first real Peter Cushing & Christopher Lee film...a significant event in fantastic cinema history...but how would it play on a 21st Century college campus, particularly one as esteemed as Notre Dame's?

I arrived at the Browning wearing my Peter Cushing shirt, and the two ladies who were accepting tickets outside the theater were quite impressed by my wardrobe. We talked about Hammer, Cushing, and Lee for a bit, and then I ventured in and got a seat at my usual preferred location for any movie I see anywhere--middle of the theater, middle of the row. I was hoping that maybe someone in the audience would also say something about the Cushing shirt, but it wasn't to be (someone did say to me "Cool shirt" as I was leaving after the film).

The screening actually attracted a decent crowd for a Tuesday night showing at the Browning. Most of the audience was made up of students--I assumed they were there as part of a class. Those that weren't students (at least I didn't think they were) appeared older than me. Listening to the conversations going on around me before the movie started, I didn't hear anyone mentioning Hammer, or Cushing & Lee...and I started to realize that maybe most of the folks here had never seen this movie, or any Hammer movie.

This gave me the unique experience of viewing a film that I knew like the back of my hand in a theater full of people who didn't have extensive knowledge of it. I truly enjoyed watching THE CURSE OF FRANKENSTEIN on a big screen in a theater setting, but I also was paying close attention to how the rest of the audience was reacting to what they were seeing.

During the early scenes which show Baron Frankenstein as a boy, there were a few giggles..and I started to think, "Oh boy...here we go." But as the movie went along, and Peter Cushing's obsession to create life advanced further and further, I could feel that the audience was starting to get into it. Mind you, I wouldn't say they were overwhelmed by it--a few folks pulled out their phones to look at from time to time, and there were a few misplaced snickers--but the crowd was overall quiet and respectful.

They also had some interesting reactions. When the movie cuts from Hazel Court's Elizabeth proclaiming that it has always been the Baron's wish to marry her to the Baron making out with his maid, nearly everyone went OOOHH!! the way kids do at recess when they find out something bad about someone. They also reacted with surprise when Christopher Lee's creature unwraps his bandages and reveals his car wreck of a face. The biggest reaction was when the Creature gets shot in the eye and blood spurts from his wound...one lady even said very loudly "Oh Geez...". The reactions weren't snarky or sarcastic...the crowd really was paying attention to the film and following the story. The audience especially appreciated the way Peter Cushing delivered the Baron's droll asides. If Terence Fisher had been at the showing, I think he would have been pleased.

For my part, I've seen THE CURSE OF FRANKENSTEIN so many times (the first time had to have been on the "Son of Svengoolie" program sometime in the mid-1980s) that I know it by heart. But seeing it in this type of venue reiterated several things for me.

First of all, the whole Hammer atmosphere, as represented by Jack Asher's cinematography, Bernard Robinson's production design, and James Bernard's music, still came through as strong as ever. Once again I was reminded why Peter Cushing is my favorite actor of all time--he carries this film, he makes it work, he makes you buy into it. Christopher Lee doesn't have all that much to do as the Creature--but his body language is so utterly alien he still manages to give an effectively creepy performance. Unfortunately I was also reminded of what a dud character Robert Urquhart's Paul Krempe is. It's not the actor's fault--Urquhart does the best he can with a thankless role. It's Jimmy Sangster's script that makes the character--the supposed "voice of reason"--so whiny, ineffective, and annoying.